You are here: Home \ Arts \ Featured Posts \ And The Oscar Goes To…
Arts
0

And The Oscar Goes To…

(Illustration by Nathan Hertzler) There’s only one night a year when audiences around the country gather to hear, “I’d like to thank the Academy.” It’s the most anticipated award show for any actress, director, or filmmaker in the entertainment industry. As the red carpet rolls out, the world’s biggest stars make way in their custom […] 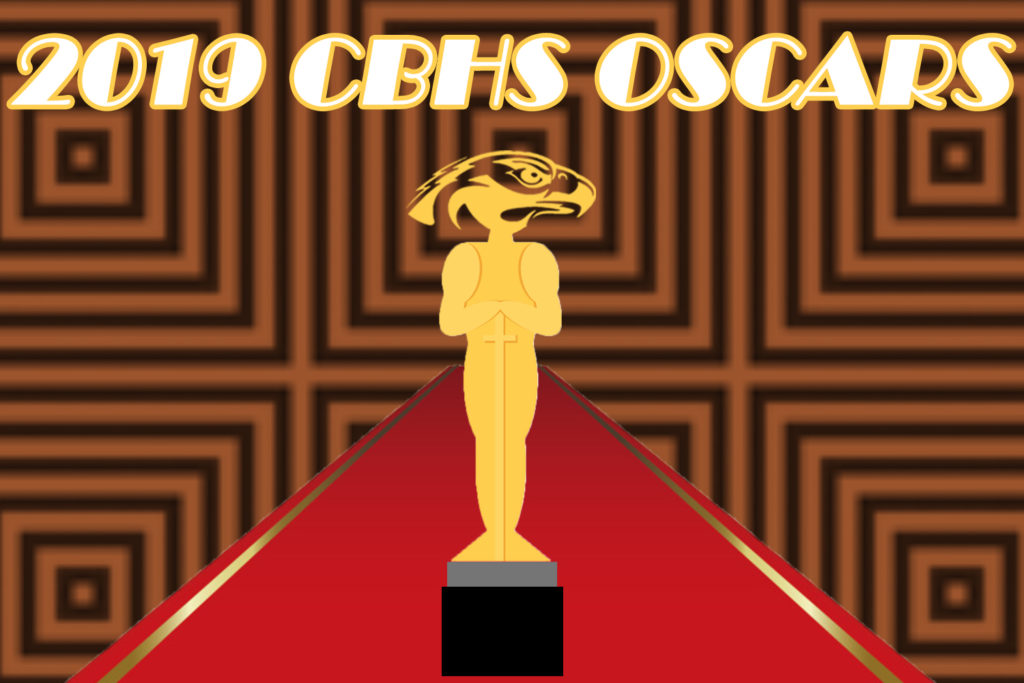 There’s only one night a year when audiences around the country gather to hear, “I’d like to thank the Academy.” It’s the most anticipated award show for any actress, director, or filmmaker in the entertainment industry. As the red carpet rolls out, the world’s biggest stars make way in their custom Louboutin heels and Givenchy gowns as they sit among countless other celebrities awaiting the results of the night.

Over 29.6 million people tuned in to the Oscars this year to see who won big. Though the Oscars is celebrated on a national scale, its appreciation for film, fashion, and design can be celebrated in any medium, even at our own school. CB’s senior class holds some of the most dedicated and promising artists. The Talon spoke to these future nominees about their creative passions.

Were you moved to tears as you watched Lady Gaga in Bradley Cooper’s A Star is Born? Were you inspired to listen to Queen all day after seeing Lucy Boynton’s heartbreak in Bohemian Rhapsody?

The featured best actress in lead role category awards actresses who help give these impressive and compelling performances that move audiences worldwide. Just as nominees put their hearts and souls into the characters they portray, senior Ana Riley Portal has been delivering seamless performances on CB’s stage for the past two years.

Ana has been paving the path of theatrical success for a decade.

“I’ve been involved in community theater since I was five. I’m not in any shows currently, but I’ve been going to college auditions around the country and I’m preparing for a cabaret with Sacramento Theater Company,” she says. “I have worked professionally before and even have EMC (Equity Membership Candidate) points that will help me qualify for a union.”

Ana’s immense experience comes from her boundless admiration for acting and singing.

“It’s what makes me happy — it’s my passion, so why not follow it?” she says. “I just want to be happy in life and do what gives me the most happiness — I feel like that’s really the key to success.”

With no signs of stopping after high school, Ana tells us what she is most excited for as she continues her journey in theater.

“I’m looking forward to college — I’ll be attending NYU in the fall. After that, I will hopefully start working and getting hired professionally.”

Ana’s love for theater has her bound for stardom. As a senior in high school, she already has just received her first Broadway callback for the role of Maria in West Side Story. But by no means is Ana’s talent restricted to the stage. After starring in several short films in CB’s Advanced Media Arts class this past semester, Ana proved her limitless talent can be showcased in any form. There is no doubt that in a few years, Ana’s name will be the highlight on both marquees and credits.

Whether it’s a movie like Mary Poppins Returns, set in 1930’s London with classic long dresses and top hats, or Black Panther, set in the futuristic country of Wakanda, driven by its unique Sub- saharan African culture and riches, audiences learn about the characters and setting of a film based on its costume design.

The best costume design category represents the designers who utilize fashion to tell the story and truly bring a film alive. Although CB’s dress code is bound to mostly khaki style pants and college sweatshirts, if there’s any student who can spice up liturgy dress, it’s senior Kelsie Cooper.

Kelsie explains that she has always had an interest for style,

“At first I was always into what I looked like, and I found that fashion was a way to really make it my own,” she says. “I’d always dress up Barbies when I was little and make little clothes for my dolls for fun.”

Kelsie expressed that her love for design comes from the limitless creative boundaries in the field.

“I love fashion so much because I think you can really express yourself. No matter how much money you have or what styles you’re into, you can learn how to make it look good and get a sense of who you are through what you wear.”

There is no doubt that Kelsie will make as good of a fashionista in college as she already is here at CB.

“I’m majoring in fashion merchandising, and I’m not for sure on what I want to do yet, but I’m really into styling necklaces, earrings, and bracelets,” the stylish senior says. “I’d love to have my own line of jewelry one day.”

With an eye for style and a heart for fashion, Kelsie has a bright future ahead of her. After years of customizing, accessorizing, and rebranding everyday CB wear, she has been named the the “Kylie Jenner” of the graduating class. Keeping up with the latest trends while still remaining in dress code is no easy task, but for Kelsie, is just one small fraction of her iconic closet. Whether it will be her most talked about dress on the red carpet or her innovative, award-winning costumes in a film, we can’t wait to see how Kelsie Cooper will change costuming and fashion design as we know it.

Steven Spielberg, Martin Scorsese, Quentin Tarantino are all names who have taken monumental steps in re-creating the film industry. This year, Alfonso Cuaran took home his impressive second Oscar in one of the most competitive categories: best director.

The best director award applauds the nominee who conveys captivating, cutting-edge directing in his or her film(s) that year.  Through their cinematic masterpieces, the way films are constructed and understood has been reinvented. Only those with an extreme amount of creativity, passion, and knowledge for film have achieved this high of a title. For senior Nick Kennedy, this dream may not be too far out of reach.

“I’ve always been passionate about all kinds of art. Growing up, I was really big into comic books and the first movie I remember being in love with was the Spider-Man movie from like 2002,” he says. “It’s still one of my favorites, but ever since seeing that, I’ve been in love with everything people have to offer — books, music, film, whatever.”

This fun pastime soon turned into a love that Nick has grown to appreciate and understand as he learns more about the art of film.

“When I first started making videos, I had no idea what I wanted to talk about, so they would be random and weird. There’s nothing wrong with that, but growing up has been so fun because I’m finding I can get inspiration out of anything I turn my attention toward,” he says.

“ I think the world is so beautiful — I could travel and just film trees and stuff for the rest of my life and I think it’s be cool. Creating is so beautiful. Having images and videos that serve as statements of the person I am, or used to be, is the most gratifying feeling.”

With an unmatched dedication, Nick talks about the future he has been working so hard to get to.

“I definitely want to work in the filmmaking world professionally. I understand that’s a really difficult thing to do, but writing and directing are so integral to the life I want to live that I’m willing to work as hard as I need to make myself known.”

As a young film enthusiast, Nick’s potential seems limitless. With a passion as strong as his, there is no doubt Nick will make a name for himself in the world of film. In a few years, we are sure to see Nick’s creativity and talent lead him to an Academy Award winning blockbuster hit.

Even though this year’s Oscars are over, with a class as talented as this, the future of acting, fashion, and film are in good hands. We can’t wait to see some CB alum rule the red carpet.