(illustration by Nathan Hertzler) For the past three and a half years, seniors have immersed themselves in the CB experience. With sports teams, club meetings, leadership roles, retreats, and spirit days, the opportunities have been endless. However, as the second semester commences, many seniors have arrived at the harsh realization that their last day as […] 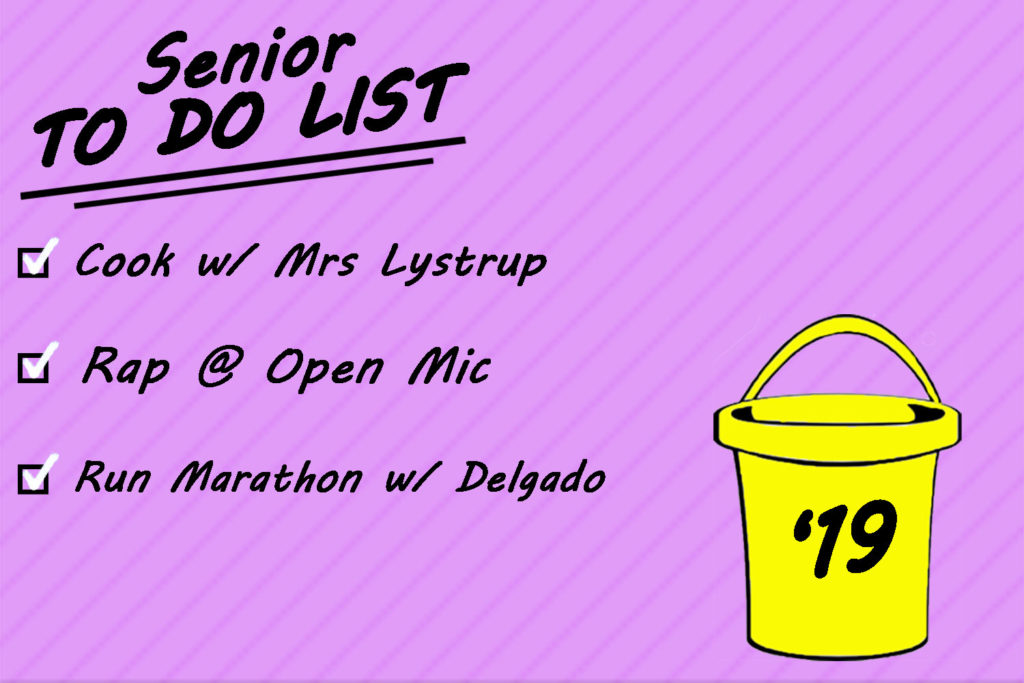 For the past three and a half years, seniors have immersed themselves in the CB experience. With sports teams, club meetings, leadership roles, retreats, and spirit days, the opportunities have been endless.

However, as the second semester commences, many seniors have arrived at the harsh realization that their last day as a Falcon is rapidly approaching. With graduation just around the corner and “senioritis” infecting even the most dedicated students, some seniors are feeling the pressure to check off the remaining items on their CB bucket list.

The Talon spoke with some familiar faces in the senior class about what they wish to fulfill in their last few months as a CB student. It is clear that this class had no problem creating bonds with the staff and administration on campus, as many of them wish to cherish their last moments with some their favorite teachers.

Poppy Ruyak (‘19) explained her love of cycling and spending time at school with teachers and friends.

“I want to rent out the spin room and take all of my favorite teachers and friends to Cycle Life before college,” she says. “[Going to spin class] brought a really tight-knit group of us girls together, and I think it’d be really cool if we got the teachers to come. I really want to go with the GOATS Mr. Anderson ’07 and Mr. Schumann.”

Mr. Anderson has left an especially great impression on the students of the senior class, specifically his championship winning girls Powderpuff team. Starting defensive safety Jessica Hennelly (‘19) reminisces on the unique team chemistry of the girls. Thanks to the emphasis on teamwork and fun provided by Mr. Anderson, this season became both a highlight and defining part of these senior girls’ last year on the Powderpuff field.

“I want to have one last morning tailgate with the senior Powderpuff team. We had a tradition on all of our game days to get together before school in the parking lot and make breakfast, blast music, and just have fun,” she said. “We’ve all gotten really close and we are really close with Mr. Anderson and I’d love to get back together and have one last reunion before we graduate.”

“I’ve always loved the way Ms. Cassetta dresses,” Casey says. “She’s so fashionable and always comes to school looking her best. I’d love to go on a shopping trip with her.”

Clearly, these seniors have attained a high regard for the teachers they’ve encountered for the past four years as role models both in the classroom and out. Sydney Carlson (‘19) further proved this adoration for the staff when she shared her wish to combine her love for cooking and Mrs. Lystrup.

“I want to cook a meal with Mrs. Lystrup. She has a passion for cooking and really good recipes like her famous ‘Golden Milk’,” Sydney says. “We never get to see that side of teachers and I think it’d be really cool.”

The special relationships formed between the students of the senior class and the teachers at CB have allowed them to connect and relate on levels beyond school and share common interests and hobbies. By getting to know the teachers personally, this senior class has learned the quirks and personalities of many teachers around campus. Haley Strack (‘19) has gotten to know Mr. Vince Leporini through his AP Government course and her part in Moot Court.

“I want to make a reference that Mr. Lep doesn’t understand. He’s always right and constantly is giving us weird phrases and sayings. But for once I want to give him a reference he won’t understand,” he says. “He loves using sayings like ‘That’s the tea’ and ‘YOLO’ to relate to us and try to be hip.”

Even in the most challenging Advanced Placement classes, teachers like Mr. Lep create an environment that students can not only learn, but engage and have fun in, traits that these seniors will miss after their final days at CB. Some lucky seniors like Berto Mujica (‘19) have had this chance to interact with teachers on a more competitive field, or in Berto’s case, a competitive race course. Berto’s experience on cross country since freshman year has brought him a one of a kind relationship with teacher and coach Mr. Danny Delgado ’79. ,

“I want to run a marathon with Mr. Delgado,” Berto says. “He’s been not only a good coach, but an amazing role model to me the past four years with so many good stories and life advice.”

As much as seniors have emphasized their academic paths in their time at CB, student athletes like Berto are sure that the tremendous impact and values that participating on a sports team has brought them will carry them far beyond their years as Falcons. Even a Division I commit like Cece Sidley (‘19) wants to spend her last semester on the softball diamond with her classmates.

“I want to win a league championship in softball for the first time,” Cece says. “I’ve been on varsity for the last four years and we’ve had some good teams in the past, but we’ve never been able to pull off enough wins to secure a league title. This year we’ve got a solid group of seniors that I’ve been playing with my entire career so it’d be nice to have our last season together be successful.”

Just as Cece said, this class has established a family-like bond and has continually proven their tight knit nature. Connor Christopher (‘19) shares his wish to take part in the inclusive community built in the past four years by participating in one of CB’s most popular events.

“I’ve only gone to one Open Mic Night before, but the audience is always full of students cheering on their classmates,” Connor says. “In my last semester, I really want to perform in an Open Mic and rap with some of my friends.”

Of the many traditions you can only find at CB, events like Open Mic have helped to unite this senior class and create an environment that supports and encourages interaction between students and teachers. Another trademark Falcon tradition that relates students to their teachers is Vocation Friday. Anthony Sweha (‘19) explained the importance of this unique tradition and the influence these days have on students.

“I’m definitely going to miss Vocation Fridays — they’re one of my favorite parts of CB. Teachers take the first Friday of every month and portion a part of their class to questions students have about them and their life, or stories from their life,” Anthony says. “It’s really fun and before I leave I definitely want to take advantage of learning more about my teachers and take the life lessons they offer to us before we graduate.”

While relationships between the students and faculty have grown over the past four years, the most memorable bonds students have created have been those with fellow classmates. Miguel Menchaca (’19) further illustrates how vital these friendships have been in his time at CB.

“Someday I want to take a day trip somewhere — I don’t care where. I just want to go to a place with my friends,” he says. “I think it’s important that we make as many memories as possible so we can look back on them one day after we graduate.”

Much like Miguel, I think most seniors can agree that, above all, this final semester will be about cherishing the last moments we have with each other and saying goodbye to the place we’ve called home since August 2015.