You are here: Home \ Arts \ Featured Posts \ Banding Together
Arts
0

Open Mic Night is a perfect opportunity for CB students to showcase their talents and often students choose to show off their musical abilities. Among the individual musicians that perform by themselves on stage are those who choose to play their music with their friends in a band. Some bands performed at the last show, […] 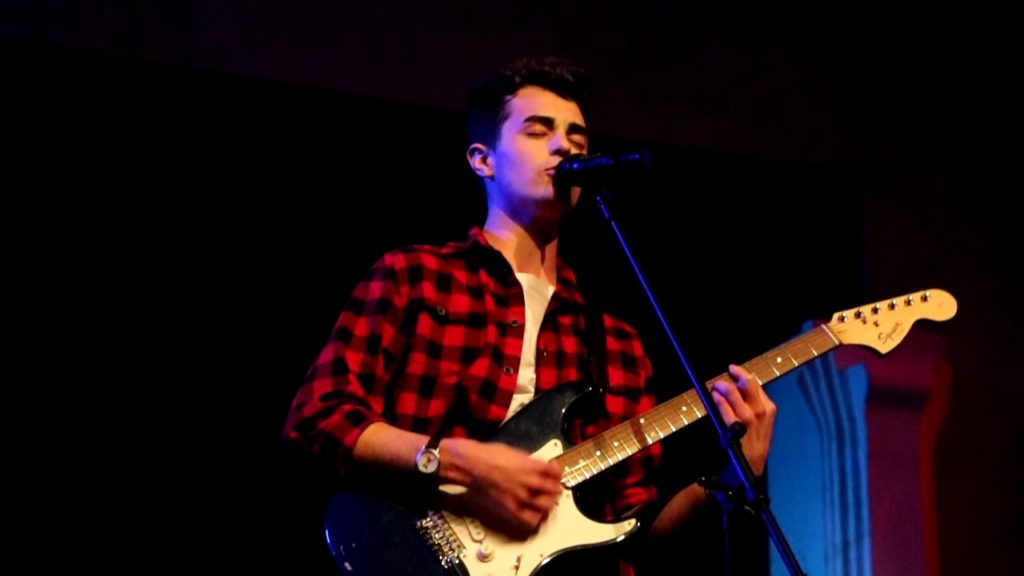 Open Mic Night is a perfect opportunity for CB students to showcase their talents and often students choose to show off their musical abilities. Among the individual musicians that perform by themselves on stage are those who choose to play their music with their friends in a band. 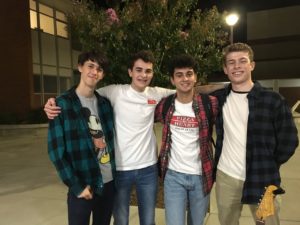 Coconut the Juicebox after their Open Mic performance.

The group began with Anthony and Jack, and over time, the boys were able to recruit the other members for a full band.

“I pushed a lot for [the creation of the band]. Jack and I were the main ones that started it,” Anthony said. “We had Enrique first and we were struggling to find [another] guitarist and then we found Sam, which was great.”

The band had plans to get together last year, but it never happened. Fortunately, they were able to start rehearsing together over the summer so they could play for the first Open Mic of the year.

“We’ve been practicing pretty much every week,” Anthony said.

Anthony and Enrique have been playing instruments for a while and wanted to continue to play music with their friends.

“I’ve been in bands, like the class band, but I wanted to be in a smaller band that actually plays music that we want to play,” Enrique said.

“I’ve played drums my whole life,” Anthony said. “I love performing, I used to perform a lot in middle school, but ever since high school I’ve never really performed. I thought having a band would be a great way to keep playing.”

Coming up with a name is one of the most important parts of creating a band, and finding one that’s unique and memorable can be difficult and result in some interesting names.

“Jack and I were talking about how absurd band names [are]. We joked that you can literally put together two random words. We were at lunch and someone was drinking from a Juicebox; coconut just came to mind randomly. And boom. Coconut the Juicebox,” Anthony said.

However, getting the band together to actually practice is no easy task.

“You have to coordinate and I was constantly the band mom,” Anthony laughed. “I’m always asking everyone what their schedule is. We all had stuff so it was hard to coordinate around all of our busy schedules.”

Their performance at Open Mic was their first performance as a band, so they were really trying to get a sense of how they play together on stage.

“That first Open Mic night was really just about getting us locked in together,” Enrique said.

Anthony agreed that their first performance was about “getting used to each other and making people know who we [are].” 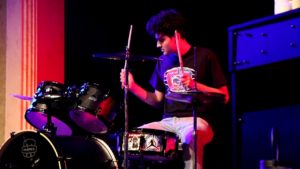 One of the other bands at the last Open Mic was the faculty band, consisting of the Open Mic Coordinator Mrs. Natalia Schorn ‘00 as lead singer, Mr. Tomas Capogreco ‘86 on guitar, Mr. Julian Elorduy ‘03 on bass, and Mr. Christian Bohm on piano. Anthony played drums at the last Open Mic, but Mr. Danny Delgado ‘79 plans to join the group later on in the year.

The name of this band is still to be determined.

“We don’t really have a name. We called ourselves the 5 Non Jesuits for the first performance this year because we did a 4 Non Blondes song, so it was a play on that,” Cap admitted. “We are putting something together for March and then May.”

“When John O’Connor was here, we got a band together and we did a song for Open Mic night, but he left and he was the main guy for that [band]. We thought we would carry it on again, so the same people who were in that band, Mrs. Schorn and Mr. Elorduy, joined again and then we got Mr. Bohm to play piano,” Cap said.

“Mr. Capogreco has asked me in the past and we’ve done something’s together, so we’ve had a lot of fun before and I thought it would be super fun this time around,” Mrs. Schorn said about wanting to continue to perform with this band.

At Open Mic in October, the group played the song “What’s Up?” By 4 Non Blondes.

“We had six rehearsals for that song, it was an easy song to play, but a hard song to sing,” Cap said.

“We rehearsed on our own and so that built into why it turned out really well,” Mrs. Schorn added.

Just like Coconut the Juicebox, this band had a difficult time getting everyone together for practice time because of everyone’s busy schedule.

“It is extremely hard to find time, especially because we all teach and we all have our own classes, which is why we are not doing the December show,” Cap said. “The good thing is that everybody is pretty good with their instruments, so we can practice it on our own and then come together and practice it as a band.”

“It was chaotic, it was difficult,” Mrs. Schorn said. “It was also really hard to find a place to practice.”

Cap and Mrs. Schorn love their experience being a part of a band and notice how they improve as musicians because of their work with their friends.

“You’ve got this camaraderie among the members, and when something comes out good, it’s just a great feeling,” Cap said. “It really brings us together as colleagues and friends. There is nothing like playing music with another person.”

“There’s definitely a feeling of camaraderie, there’s a coolness factor to it,” Mrs. Schorn agreed. “It gave me more confidence. I’ve performed on my own, but in a band you have other people who are counting on you to do your part right.”

Mrs. Schorn has sung in choirs and in weddings, but “this was a whole different different kind of stage though, so that was definitely out of my comfort zone.”

She also wants to support the Open Mic club by performing with her band at the shows.

“I think [the band] benefited the show in general because kids like to see teachers up there ready to go ahead and take a risk,” she said.

These bands work so hard and have so much passion for the music they are playing. Make sure to go support them and all the other CB students in any of the Open Mic Night performances this year.