It’s crunch time for CB students. The stress of borderline grades, missing assignments, and finals are compounding quickly, and it’s easy to get lost in the sauce of class. Luckily, some of Christian Brothers’ most effective crammers are here to help their fellow Falcons in their final reviews. Emma Talley (‘19) is well known for […] 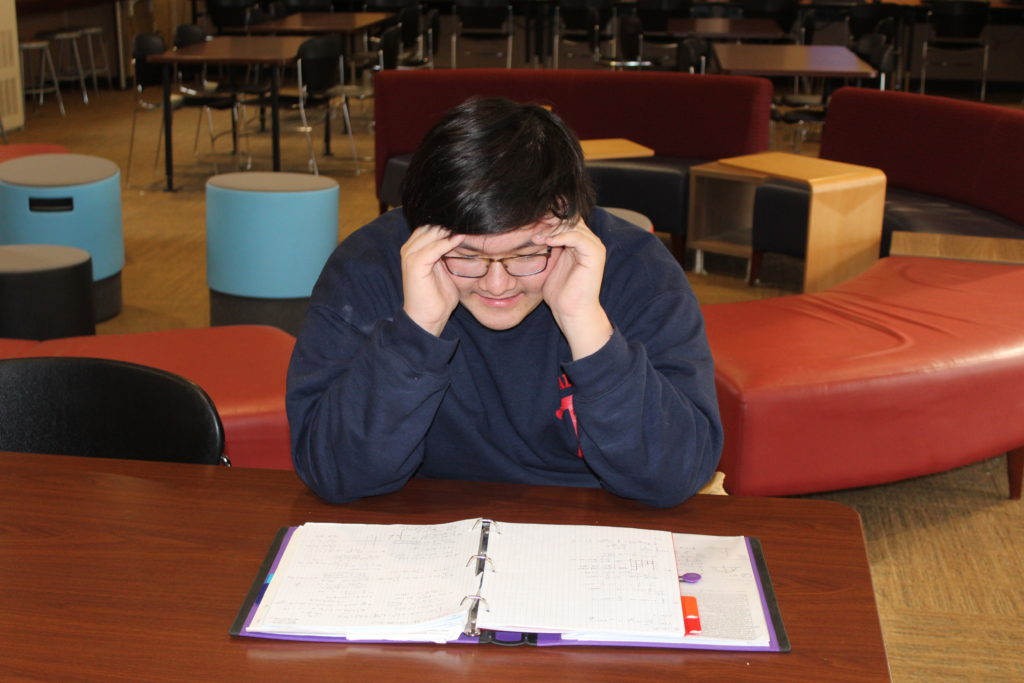 It’s crunch time for CB students. The stress of borderline grades, missing assignments, and finals are compounding quickly, and it’s easy to get lost in the sauce of class. Luckily, some of Christian Brothers’ most effective crammers are here to help their fellow Falcons in their final reviews.

Emma Talley (‘19) is well known for her great grades and productive cramming around finals. Between Lasallian Youth, Young Progressives, college applications, and driving her siblings to practices and appointments, she crams in studying any moment she can spare during her busy life.

“I have to drive my siblings everywhere, so there’s three different Starbucks I study at. I can’t study at home because there’s too many kids and there’s too many electronic devices that distract me easily,” she says. “When I go to Starbucks, those distractions are taken away.”

Thaddeus Nazareno (‘19) is well respected for his coffee taste and feels at home surrounded by the smells and tastes around him at cafes.

“I like to go to a coffee shop and completely immerse myself in my studies,” he says. “My favorite is Caffè Latte or Cafe Barrio because they’re not as populated as other coffee shops, so there’s fewer distractions for me.”

Cafe Barrio is located in South Land Park, while Caffè Latte is in the Pocket. They’re both great to drink coffee and bury yourself into your textbooks for that upcoming Biology final. If you’re in Midtown, East Sac, or Land Park, Chocolate Fish Coffee Roasters is a great option to study in groups. The environment is great because there are large tables for group projects and the combination of music and coffee roasting that provides white noise. Additionally, Temple Coffee is also popular because of its interesting environment at their K and S street locations. Old Soul has always been a popular study spot because of its proximity to Christian Brothers and its seating for both individual and group study.

Evdokia “Evi” Tsiopos (‘19) on the other hand, doesn’t need to go to a cafe to get in that grind.

“I usually study at home at my desk, because when I’m in a more comfortable position, I get tired easily. I prefer studying with other people on FaceTime, because even when I don’t understand something, I can say it out loud to someone in my class, and I understand it better,” she says. “Also if you study with someone who’s super good at the subject, it benefits both of you because people learn better when they teach it.”

But what tunes do these studious seniors listen to to help them study?

Thaddeus prefers classical music because “words can sometimes distract me. I like listening to Beethoven in particular.”

Evi similarly prefers “lo-fi study music. It doesn’t have any words in it, so it doesn’t interrupt your studies.”

Lo-fi hip hop, or low fidelity music, has minimal production, giving it a raw, homemade sound. It is called chill out music by creators on Youtube and has become popular recently among students who need background music that doesn’t distract from difficult tasks that require concentration.

Emma listens to calming noises during hard subjects such as Physics or Math.

“I have a white noise playlist on Spotify. It’s called ‘soothing noises’ because physics makes me want to cry, so I need something to call me down so I don’t cry in public.”

Another great upcoming genre is bedroom pop, which has similar tones to lo-fi hip hop, but with more words. During a study session, the songs blend together, creating a good background noise if you prefer music with more lyrics.

Emma not only studies the material, but the patterns of previous tests from her classes.

“Over a semester, you generally learn what the tests are like, so I usually study like I would for a normal test,” she says. “My final grade is not going to be dramatically different from any test I’ve had in the class, so I know how long I need to study for certain classes based on that, and I prioritize by what’s going to take the longest.”

Like his music taste, Thaddeus prefers traditional methods of review.

“I just put on some classical music, read flashcards, and go over my notes.”

Evi plans for her difficult finals in advance, standing by her method of repetition to get the material to stick.

“When my hard finals are in a few days, I’ll do something small like make a Quizlet and go over it a couple times, then go in depth as the test comes closer. When I really need to drill something into my brain, I just write it down over and over.”

“It’s great to get a Quizlet from someone else, but when you do it yourself, it reinforces the material better,” Evi explains.

Although it’s easy to assume that these straight A students have it all together, they fall victim to laziness and procrastination like everyone else. Emma has a tool to prevent procrastination from crippling your grades.

“I’m very stressed out so I can’t procrastinate or else I get anxious. I generally know how much I procrastinate, so I start early and factor in the procrastination time.”

Evi avoids this problem by making studying her first priority.

“Start right when you get home. When I get home, I immediately want to take a break, but I’m at my most productive right after school. After I study for a certain amount of time, I give myself a small break.”

A scientifically proven method to stay on task is called the Pomodoro technique. It advises taking a five minute break for every twenty five minutes of work. Not only does this method keep you focused, it also allows you to take a step back and reevaluate the material. We all have looked at a math problem that seemed impossible, only to come back a little later and solve it within seconds. This method helps you do that more consistently in your studies.

Some suggestions to do during your breaks are take a walk, stretch, or talk to a friend or family member. After every fourth session, take a longer break between fifteen and thirty minutes so your brain isn’t exhausted.

This method has helped Evi succeed over the past three years, along with these other tips that she has learned along the way.

“For Math, go through all the problems in the book that you have trouble with. If your Literature teacher gives you an essay question beforehand, make a paragraph at home so you have an idea about what you’re going to write.”

“Don’t freak out and try to know everything if the questions are going to be about general understanding. Looking back on Mr. English’s class, there was no reason to study 3+ hours right before the test because I’m not gonna learn all of World History in just three hours — It’s just not going to happen,” she says. “With most teachers, there’s not going to be any surprises because it’s all material that’s been covered.”

One great resource that CB has to offer is peer tutoring. Oftentimes, students have hacks that help them understand material and approach teaching in a less conventional way than teachers. Sometimes, all you need is to look at a problem in a different way to understand the concept. Additionally, all CB teachers have office hours because they want their students to succeed. Teachers notice when students put in extra effort throughout a semester and tend to be more sympathetic toward them when it comes to borderline grades.

Before the stress of review and final days hit, be sure to take this last week of regular classes to turn in any missing assignments and ask your teachers if there’s any extra work you can do for credit. Even if your teachers don’t offer extra credit, they’re willing to help with any questions you may have about the material, and will guide you along the right path when it comes to studying effectively.

Good luck on your finals!