The Passion Of CB’s Political Partisans

(illustration by Joaquin Romero) I used to be someone who would run out of the room as fast as possible when my parents or classmates would bring up anything even remotely related to politics. The only time I cared to hear about the government was in history class, and I would only go as far […] 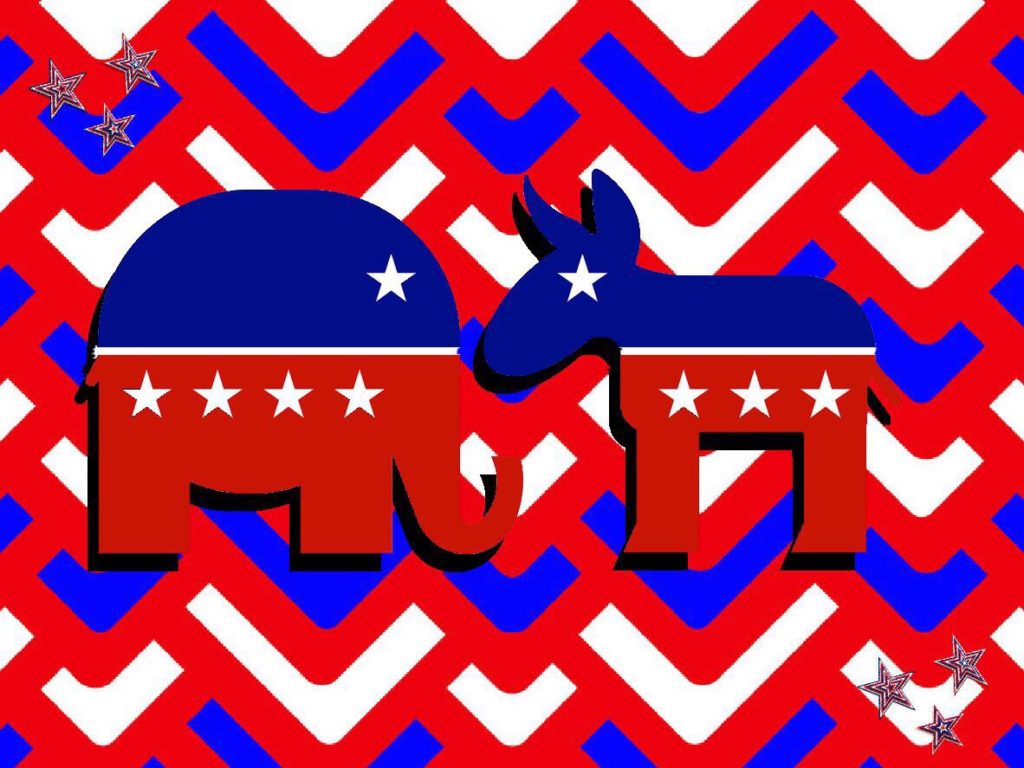 I used to be someone who would run out of the room as fast as possible when my parents or classmates would bring up anything even remotely related to politics. The only time I cared to hear about the government was in history class, and I would only go as far as to learn about the current President and Vice President. I did not care and I did not want to listen.

But as prospective voter about to turn 18 and go to college, I realize that not only is it way more difficult to be involved in politics as a teenager, but also how informed one has to be in order to comprehend the ballot. I see more of my friends getting involved in politics, educating themselves, and voicing their opinions to people who strongly disagree, even if those people are their parents.

The subject of politics can be a sensitive one, especially after the 2016 election and the 2018 midterm elections, but teenagers should be aware of what is happening in our society. However, high schoolers spend much of their time and energy balancing school, work, and social lives, so it’s understandable that many do not stop to read about complicated political issues. But it isn’t long before we become adults and have to realize the impact government has on our society.

The Young Progressives and the Young Conservatives are two CB clubs that work to educate themselves on the current issues, whether that be economic, social, or political, and discover how the government uses its powers to fix these issues. Often times, the government does not seem to be fixing or helping any of the country’s major issues, which can be incredibly frustrating for those who feel strongly about the solutions to these problems.

Sam Seiler (‘19), Emma Talley (‘19), Hannah Gruber (‘19) , and Kaleo Mark (‘19) are the leaders of the Young Progressives, moderated by Mrs. Maureen Wanket. This club focuses on a more liberal point of view that tend to align with the Democratic Party. These students have been exposed to the news and the larger political world from a young age. When they got older and became more educated on the government and social, political, and economic issues, they wanted a space on campus where they could talk about their views.

“We wanted to start [the club] because there was no real liberal perspective on campus. There wasn’t a political club at the time, so we saw a vacuum and said, ‘Let’s do this!’” Emma exclaimed.

The Young Conservatives are lead by Sam Copley (‘19), Gio Del Piero (‘20), Wyatt Greco (‘20), and Jacey Greco (‘20), with Ms. Mary Bowers moderating. The club’s views tend to oppose those of the Young Progressives’ and aligns more with the Republican party. But both clubs want to work together to get students informed on current political issues and events.

“The Young Conservatives and the Young Progressives strive to do so many things together, which is something I feel is very important,” Ms. Bowers said.

Unfortunately, there hasn’t always been an inclusive environment when it comes to politics in general. The collaboration of these clubs is important because students now have a safe place on campus where they can share their political views and debate topics in an informed way.

There are many misconceptions that teenagers face while exploring and learning about the political environment in America. Since we cannot vote until we turn 18 and the majority of teenagers choose to avoid the subject of politics, many people from older generations make assumptions about what we know.

“I see a lot of adults think ‘what can we know?’, we’re under 18, we don’t pay taxes, we don’t have real jobs, we don’t know what we’re talking about,” Emma said. “In reality, you can be really educated on a lot of social and economic topics when you’re under the age of 18.”

Seiler agreed that many adults have a similar mindset towards teenagers because we don’t have to pay taxes.

“If you don’t have a job because you’re a student and you’re not taxed, then your perspective isn’t valid,” is a stereotype he hears frequently. “But I can still understand the policy issues,” he says.

“No one our age votes, so people don’t think we have an opinion,” Emma added. “I think people are genuinely surprised when young people are interested in politics and are educated.”

Not being listened to by others and having your opinions shut down can be incredibly frustrating, and it’s just one of the many other problems and misconceptions teenagers face in politics. We are also accused of only acting on emotions instead of logic.

“I think there’s this misconception that when teenagers get into politics, it’s usually based on an emotional feeling, not a practical one,” Gio says.

While teenagers tend to get more involved during emotional times in our country, such as after the 2016 election and the Parkland shooting, the opinions of young people are overlooked because people assume that emotions drives teen’s political beliefs. Adults also tend to believe this misconception because of social media and how social media has significantly changed the way politics are handled in this country.

News is blasted onto platforms like Twitter, and with that comes people who are misinformed, but still preach that their beliefs are correct. Since teenagers are more exposed to social media, adults start to believe that we only get our news or facts from Twitter. But that’s not the case for those who are involved in these clubs.

“We have more diverse beliefs than what you see on Twitter,” Emma said of not only teenagers, but also the Progressive movement in general. “I think everyone is emotional about politics these days, not just teens. We are at a point where politics are so divisive they can tear families apart.”

On top of all the misconceptions about teenagers, it’s difficult to be involved in politics in general. Once someone identifies with a certain party or movement, others may start to judge him or her based on the stereotypes of each party. The two parties have deeply divided Americans when it comes to politics. Many people do not listen to each other as often, self-select the news they want to listen to, and generalize and put certain labels on those in political movements.

Ms. Bowers hears misconceptions about conservatives all the time, a major one being that “conservatives are heartless, money-grabbing capitalists”. Copley has had a similar experience and says that “one stereotype is that we only care about ourselves and what we own, we don’t care about others, and that [conservatism] is this capitalist view that we hog all our money for ourselves.”

While many conservatives support capitalism, the stereotype that all conservatives only care about money all the time is false. Copley cares about giving back to his community and understands that helping others is very important to society.

Gio also thinks that a main issue for conservatives is countering this concept of identity politics.

“It’s this emphasis on a person’s value is now being placed on gender, race, or class, when it should be placed more on values and beliefs,” he says.

People in both parties fall victim for being insulted not based on actions or actual beliefs, but based on traits one cannot control. This mindset can prevent a person from actually listening to an opposing opinion and instead just creating a false opinion based on assumptions.

“Another [misconception] is that we’re all Trump supporters and we’re all crazy ‘Make America Great Again’ people, but that’s not the case,” Copley says. “We are surprised by his policies. Trump is not conservative because conservatives believe in respecting all people and being civil.”

“We are all the same aka we’re ‘snowflakes’,” Emma says. Another one that she has hears is that progressives aren’t as patriotic as conservatives.

“We want to do everything we can to make this country better,” she says. “We honor the flag and the troops, we just see a lot of issues with the way things are being run and we want to make this world a better place.”

“Progressives aren’t anti-capitalism. We just realize that it needs a lot of regulation,” Seiler says.

“Progressives don’t want to take all your guns,” Emma says. “We just want gun reform to reduce the amount of deaths caused by guns.”

Despite politics being incredibly disheartening and frustrating, these four students have passion for the work that they are doing with their clubs. They want to make a difference in their community, and they are willing to face these challenges and all of the petty political backlash.

“There needs to be a change, and if we give up and stop trying there will never be a change,” Emma says. “I love this country and I want to make it better.”

“I think for me, it’s that there are others out there who want the same thing,” Gio says. “So when I see others out there, it means that I can keep going and that others will have my back.”

My peers are willing to say what they believe, even though they know that there are people who might attack them for it. They are brave enough to stand up for their beliefs, even if it goes against social norms, and they put in hours and hours of research to create solid arguments to back up their points.

“They’re smart, they know why they think what they think, and they’re highly informed about the issues,” she says. “I think teenagers are the role models and the true leaders.”

Ms. Bowers said she is “proud of them” and that “they are great kids with big hearts.” She continued to talk about the drive these students have and that “they love their country very much and they’re motivated by patriotism.”

A large part of what these two clubs do is motivating other people to get involved in politics, and they want others to start educating themselves so that when we all turn 18, we can vote responsibly.

“High School is the right time [to get involved],” Seiler says. “You can pre-register, there are clubs on campus, you’re old enough to read a newspaper.”

Every single time I asked how young people can get involved and stay informed, the response was to go out and talk to all sorts of different people and read news from all different sources. .

“Go to a few meetings, talk to Ms. Wanket, talk to Ms. Bowers, talk to people, connect with people, have a conversation, be respectful,” Emma says.

Seiler emphasized that voting is critical.

“You can register and you definitely should because it’s the only thing you can really do to have an impact. It’s good to stay informed, educate yourself and vote,” he says.

“There are plenty of alternative media sources out there, especially on YouTube, and they go into depth of issues that mainstream media doesn’t,” Gio says.

Both clubs want people to be able to ask them questions about policies, issues, and other political matters. They are trying to cultivate an environment where opposing views are welcomed and discussed in a healthy manner. These clubs are helping to broaden the perspectives on campus as well as help people figure out what political path they want to follow.

It can be difficult to get involved with politics — it’s scary and there are a lot of frustrating aspects that can create setbacks. However, just make sure to ask a lot of questions, read all sorts of news sources, stay up to date on current events, and most importantly, vote.