You are here: Home \ Community \ Featured Posts \ A Solution For Sleepy Students
Community
0

A Solution For Sleepy Students

(illustration by Joaquin Romero) Sam Seiler’s (’19) mother is worried about him. “I survive off six shots of espresso a day. She thinks it’s unhealthy. I don’t blame her, but there is no room in my life right now,” he says. Emma Talley (’19) is unhappy. “Most weeks I’m lucky if I average five hours a […] 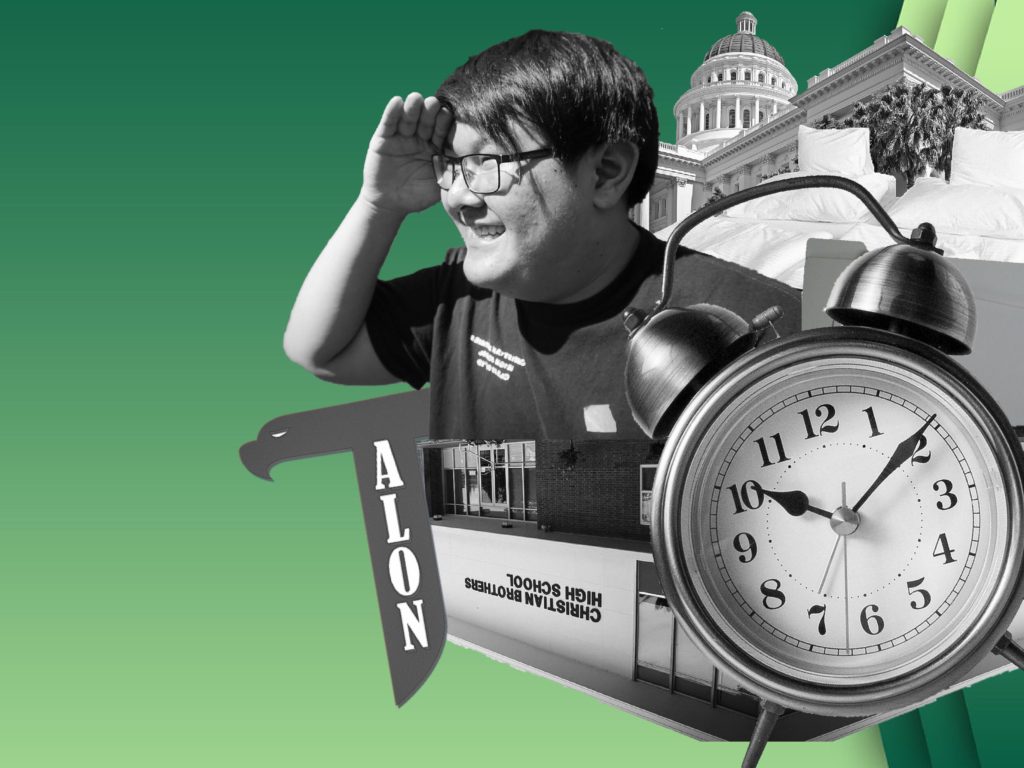 Sam Seiler’s (’19) mother is worried about him.

“I survive off six shots of espresso a day. She thinks it’s unhealthy. I don’t blame her, but there is no room in my life right now,” he says.

“Most weeks I’m lucky if I average five hours a night,” the art aficionado exclaims. “If I can get seven hours of sleep I’m so happy.”

“I live quite far away, I carpool, and I have homework to do in the morning, so I don’t get much sleep.”

Like Sam, Emma, and Kaitlyn, many students struggle to get enough sleep during the school year. Life can feel overwhelming when juggling school, extracurriculars, family obligations, and our social lives. We tend to sacrifice sleep so we can complete our myriad of activities.

But at what cost? What do we lose when we cut back on our sleep?

In 1910, American’s slept on average nine hours a night. Fast-forward to 2013, and a Gallup poll discovered that Americans only got around 6.8 hours of sleep. While most adults only need 7-8 hours of sleep, 8-10 hours of rest are recommended for teenagers.

In early September, Senate Bill 328 was proposed by Democratic state senator Anthony J. Portantino. The bill would have required public and charter schools in California to start class after 8:30AM. Proponents of the law argued that allotting students more time to sleep before school would have been beneficial for students’ grades, attendance, and mental health.

The bill made it through the California State Senate, but was rejected by Governor Jerry Brown, who wrote that “these are the types of decisions best handled in the local community”.

Had Senate Bill 328 become law, public and charter schools across the state would have had until July 2021 to shift their school days to the required 8:30 AM or later start. Christian Brothers, on the other hand, wouldn’t have been affected by the law. The U.S. Department of Education states that in California, “the length of the private school year and school day is set by the private school officials who oversee the operation of the private school”.

There are not set rules for when private schools have to start class. Pushing the start time back to 8:30 AM or even 9 AM would enable students like Emma, Sam, and Kaitlyn to get more sleep. We don’t have to start classes at 8 AM, so why do we?

“I think that would be an amazing idea,” senior Keaton Kirrene (’19) says. “Not only because it’s great to sleep in, but I think it would improve students mental health. I think poor time management and distractions like social media do play a role, but I think the current schedule doesn’t partially help students get sleep either.”

Naomi Conley (’19) is “absolutely” in favor of making the shift.

“There are already studies talking about how just one extra hour [of sleep] can make an improvement in student performances. Also, even when I wake up on late start days, it just feels like the right time. The sun is already out. I feel like I’m ready for the day. But when you wake up and it’s dark out, especially in the winter, it already dampens my day.”

Recent scientific research and surveying seem to back up Keaton and Naomi’s claims. A study by the National Institute of Health estimates that only 9% of high school students get the recommended nine hours of sleep every night. A staggering 20% of students sleep less than five hours a night.  While sleep deprivation may seem like a minor issue, the ramifications can be devastating. Students who lack adequate sleep are more prone to mental health issues, substance abuse, learning and behavioral issues, and obesity. The American Academy of Pediatrics even went as far as to call the issue of tired teens a public health epidemic.

Psychology and AP Government teacher Mr. Vince Leporini is not opposed to the idea.

“I think we have kind of a case study of late starts on Thursdays. If students feel that late starts are helpful in getting work done or sleeping, then it seems like a small shift to make.”

“I have a lot of things I need to do to help my parents out. I drive my siblings all over the place. A lot of the times their activities are an hour away. I also have to get my work done, so even though I don’t have a high magnitude of homework, it’s balancing the two which can cause trouble. A lot of the time I get home so late that I wake up at 5 AM to do stuff.”

Grace Murphy (’20) typically gets seven to eight hours of sleep a night and supports the idea of starting school later in the morning.

“It would help so much. Sometimes my brain doesn’t want to function when I get to school. By the afternoon, just how little sleep I got the night before really affects me until the end of the day. By that point I really just want to go home and have a break.”

Most of the students and teachers I interviewed were in favor of or at least willing to try delaying CB’s start time. With broad support from the community and a plethora of scientific data showing that teens are more sleep deprived than ever, doesn’t it make sense to rethink how we schedule our school days?

“I understand the circadian rhythms of teenagers are kinda offset from the rest of the adult world, but in my studies of sleep patterns, I think keeping a consistent pattern is more important.”

Mr. Reel was in the same boat as many of us during his high school career.

“I think my average sleep schedule was I would go to bed between 12 and 1 most nights and then I would have to commute [to school in the morning],” he recounts. “I was up no later than 6, left the house at 7, and got to school. And that was on days I wasn’t working. Those days I would get home from work at 10:30 to 11 at night and still have to do homework. I was getting to bed between 2 and 3. It was murder. I was not a pleasant person to be around.”

“I think back to my own experience and so I have empathy to the plight of young adults in managing your schedules,” Mr. Reel added. But at the same time, he believes “there are other things that I think aren’t being addressed in the schedule. We aren’t adjusting for those other activities like co-curriculars or the work load we have to take home. Just having a late start is a band-aid on the larger issue. I think there are different ways to solve this problem.”

I sat down with Principal Mr. Chris Orr to find out where the administration stands on the issue.

“Looking at the start time has been a subject every year,” Mr. Orr told me.” As a school, every year, we look at how to do things better. We always look at it and say ‘what is working at other places, what is working best for our kids?’ We look at it, discuss it, but there just hasn’t been enough of a reason to say ‘yes this is absolutely the right thing.”

Mr. Orr acknowledges that students are more inclined to sleep later at night than adults, and he does think that students need more sleep, but he worries about the unintended consequences that late starts could bring about.

For students who don’t drive, transportation would have to be rearranged for a later start. This can be problematic for parents who can’t afford to drop their kids off 30 minutes later because they have work. Commute times could become more of a headache if school starts and ends during traffic hours.

Because games can often cause student athletes to leave early, Mr. Orr doesn’t want to exacerbate the problem of students missing out on class time.

“I don’t think moving start times back is unreasonable, but there is not a clear answer either way. There are pros and cons both ways. What I do is I look at results and go backwards. If someone is doing really well, I want to know how you are doing it and go backwards from there.”

Mr. Orr has looked into the possibility of implementing more block schedule days to reduce the amount of time we spend in passing periods, thus reducing the length of the school day.

“I think young people today aren’t getting the necessary sleep they need. There is always something to do. But I also think it is a discipline that young people need to say ‘I need to lay down and go to sleep at a reasonable hour’. In a sincere way, it is tough for you guys because sometimes you get home and have homework that is insane. It can be a lot of late nights and you’ve got to get up bright and early in the morning. That’s tough to do.”

The transitions that would need to be made for later school starts to become a reality may prove too great to overcome given factors outside of student’s control. Ultimately, if we truly want late starts, we need to pursue tangible solutions and work with the administration to make our sleep deprived dreams come true. We can’t just sleep on it.