As the new school year rolls in and the weight of the never ending workloads become a burden, it’s always a pleasure to have the close comfort of a loved one. Better yet, it’s even more of a pleasure when that special loved one roams the same hallways, corridors, and classrooms as yourself. Having siblings […] 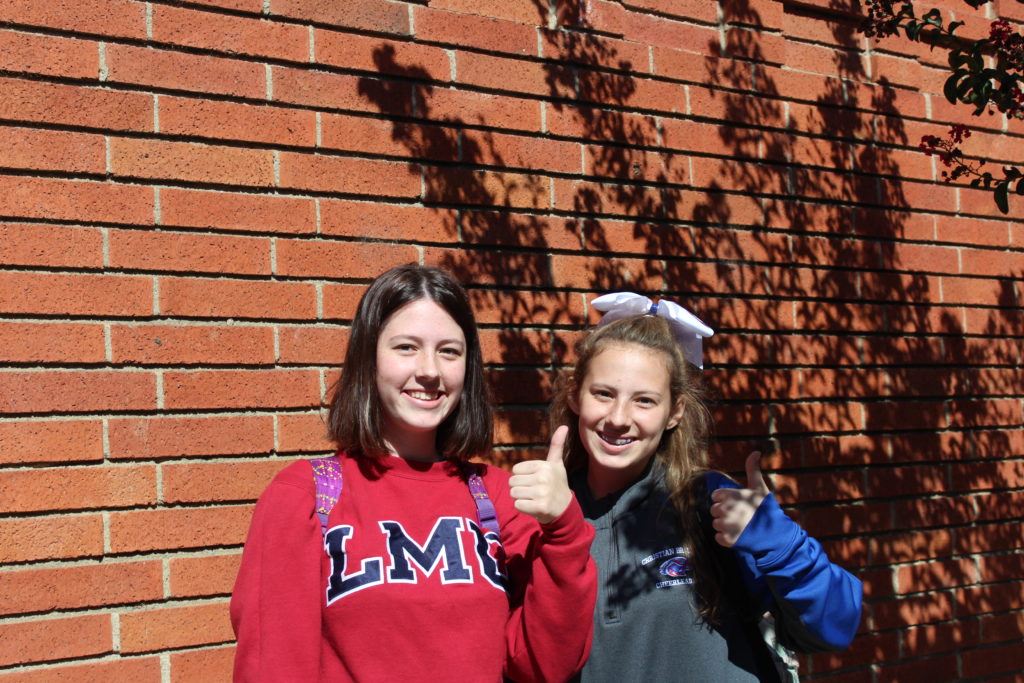 As the new school year rolls in and the weight of the never ending workloads become a burden, it’s always a pleasure to have the close comfort of a loved one. Better yet, it’s even more of a pleasure when that special loved one roams the same hallways, corridors, and classrooms as yourself. Having siblings by your side both at home and at school can seem unbearable and irksome, but these CB siblings manage to make things work.

Abigail Wall (‘20) has familiarized herself with the ways in which her new class schedule works and is well adjusted with Christian Brothers as a whole. With the new company of her younger sister Emily Wall (‘22), the atmosphere of school itself becomes a bit more interesting.

When asked what they like about having a sibling at school, Abby tells the Talon that “in the hallways, she grabs my shoulder in a certain way and it’s really relaxing.”

Abby further explained the perks and downsides of having a younger sister at school.

“I don’t want to buy a sports locker so I just put my stuff in hers,” the junior says. “I hate sharing my CB clothes with her.”

But Emily tells the Talon about she has different views on sharing the campus with an older sibling.

“I don’t like how she can see me wherever I go,” she says. Seeming as if she’s having difficulty in finding the brighter side of things, Emily shared that “I like that I can take Abby’s Sogo card if mine runs out.”

The Walls tell the Talon that they are active in cheer. “It is just grand. Cheer is life.” Overall, the Wall sisters possess a loving and warm-hearted nature that is present in the CB community.

Jon Pearson (‘20) and David Pearson (‘20) not only share the same campus with one another, but also the same DNA. The Pearson twins spilled the details to the Talon about the benefits and disadvantages of having a twin at school.

“I can always hang out with my brother at lunch, and it’s cool to talk about our days and different experiences at the end of the day,” Jon says. “Any sibling can be annoying, especially David, but I think there’s more positive stuff than negative stuff.”

Jon and David expand on the topic of sharing the same sets together.

“I like to keep a healthy balance when it comes to classes because if you have every class together, it can get annoying and that’s how it was in elementary and middle school.”

“Going into freshman year, I specifically asked to not be in any classes with Jon just so I could have my first year to myself,” David says. “I would be able to get a hold of how high school works but without him. It worked out and I still hung out with Jon.”

Jon and David partake in sports at Christian Brothers and enjoy their choice of extracurricular activities. Jon is on the football team, David is on the water polo team, and both are in rugby. But Jon quickly denied if he feels like David needs to fill in his shoes.

“We’re each different people and I started playing football and he started water polo — I don’t think he has any shoes to fill in.” But David felt differently.

“I feel like I guide him most of the time. Honestly though, we’re mostly like equals and we help guide each other.

Erin and Erica Willis (‘22) are twins in the freshman class and new to the Christian Brothers community. The Willis sisters are eager as they share their opinions on the new atmosphere of CB and what it’s like to take high school on with a twin. Erin explains the good and bad of having a twin by her side.

“I like when we have classes together because it’s fun and we just laugh with each other. I don’t like it sometimes because she’s always around me” says Erin. Similar to her sister, Erica shares that “it’s an advantage because we get the same homework so it’s easier.”

Unlike the other siblings, the Willis sisters prefer having the same classes together. Both agree that sharing classes is “more enjoyable and fun.”

Both sisters confidently agree that they are constantly looking out for one another, with things steering a bit more towards a playful side.

“When I’m mad at her, I’ll always tell her she wants to be like me,” Erica says.

Erin explains that her sister provides her with unwavering support.

“Surprisingly, she guides me in her own way. She has her own type of way of looking out for me.”

Erin and Erica have a mix of similar and different extracurricular activities such as basketball, volleyball, and past student council teams. With their affectionate and charming characteristics, the Willis sisters are confident in taking on the the next four years together.

Whether it be in the same classes or in the same sports, the siblings in the Christian Brothers community create a pleasant environment that are shown both in and out of home.