A Hello To Mrs. Hanshew

Summer reading. School supplies. Class schedules. Starting a new school year is stressful enough. But could you imagine what it would be like as a new teacher in a new city? This has been the reality for Christian Brothers latest U.S. history teacher, Mrs. Erin Hanshew. A native to the Bay Area, Mrs. Hanshew […] 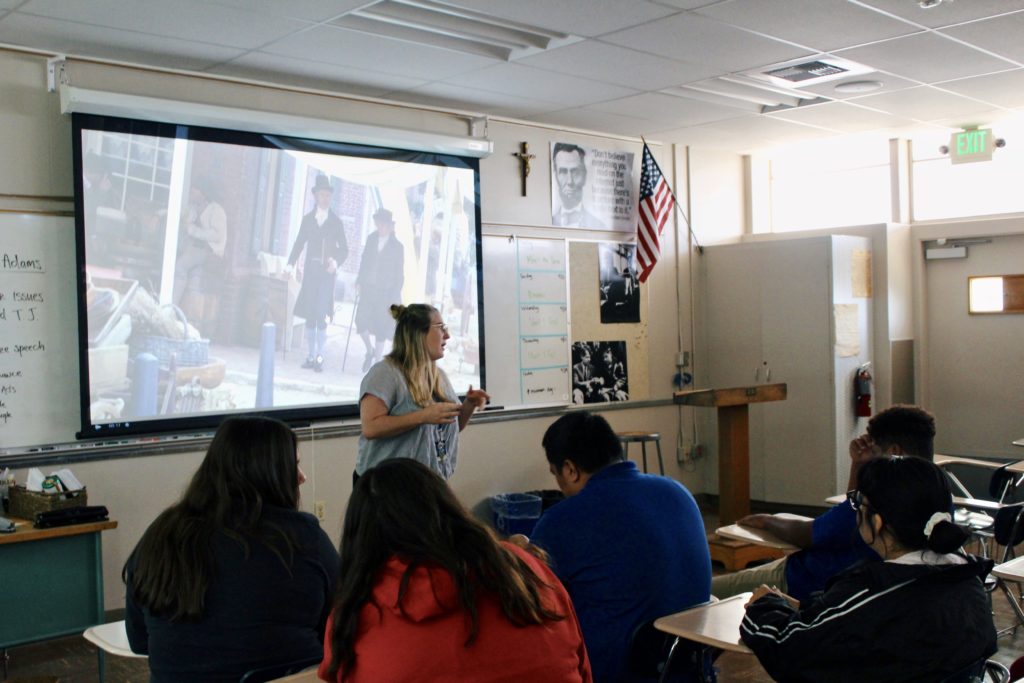 Summer reading. School supplies. Class schedules. Starting a new school year is stressful enough. But could you imagine what it would be like as a new teacher in a new city? This has been the reality for Christian Brothers latest U.S. history teacher, Mrs. Erin Hanshew.

A native to the Bay Area, Mrs. Hanshew was currently living in Oakland when she was offered a job at CB. One morning, she even woke up at 5 AM and drove straight from her home city to be present for work. Prior to teaching here, attending college at UC Davis was the closest connection Hanshew had to Sacramento. Thankfully, she won’t have to leave every aspect of the Bay behind her.

“I like that with Sacramento, certain things about it still feels like the Bay Area. There still is the same culture and diversity which I really value,” she says. “Also, I’ve had a lot of friends move here so that makes it a lot easier. And last but not least, it’s a little bit more affordable than the Bay Area.”

Affordability in Sacramento has been a major motive for the urban masses moving here. In tech-industry cities like San Francisco, even small-scale apartments would take four minimum wage jobs to afford. Mrs. Hanshew and her husband experienced firsthand the outrageous cost of living in this area.

“Even in Oakland, buying a home was not going to happen,” she says.

So how has the house hunting process been for her? Slow, and rightfully so. Between settling into a new school and new surroundings, the Hanshews found a place to rent until they can begin searching for a long term home.

Now this may come as a surprise to you locals, but Mrs. Hanshew’s biggest adjustment hasn’t been her recent living space or unfamiliar environment, but instead the Sacramento heat.

“The Bay Area is definitely famous for never getting over 80 degrees and never below 55. So here, even 85 is really hot for me.”

As far as her first impression of Christian Brothers High School, Hanshew expressed it as a positive one.

“I was at Sacred Heart Cathedral before, which is also Lasallian, and it seems very similar to that. It feels like everyone here is as happy to be here as you could possibly be at 8 AM every day. There’s a little bit of something for everyone, no matter what you’re into, you can find people who have similar interests. And people are nice, which is great.”

With the initially confusing schedule, Mrs. Hanshew’s biggest teaching adjustment has been trying not to overdo the class work in a concise 45 minute period.

“I’d say the most different thing about it is the schedule and it’s a little bit harder for me.”

Outside of the classroom, Mrs. Hanshew visits one new country every year with her husband. Their travels usually consist of a hiking trip followed by a tour of cities.
Most recent visits include Canada, Switzerland, Columbia and Argentina with a trip to Italy in the works for next summer.

Mrs. Hanshew’s dedication and enthusiasm towards teaching is certainly commendable. Her flexible and thorough teaching style has been an excellent addition to our school, and we hope you have the pleasure of having her as a teacher during your junior year.