All you see is a cloud of blue powder. The Mary Lawn is filled with the entire student body. You hear the music blasting in the background. ♫ Just don’t take the money ♫ The doors from the admin hallway fly open. A wagon rushes down the middle of the aisle as camera man Ron Camasura […] 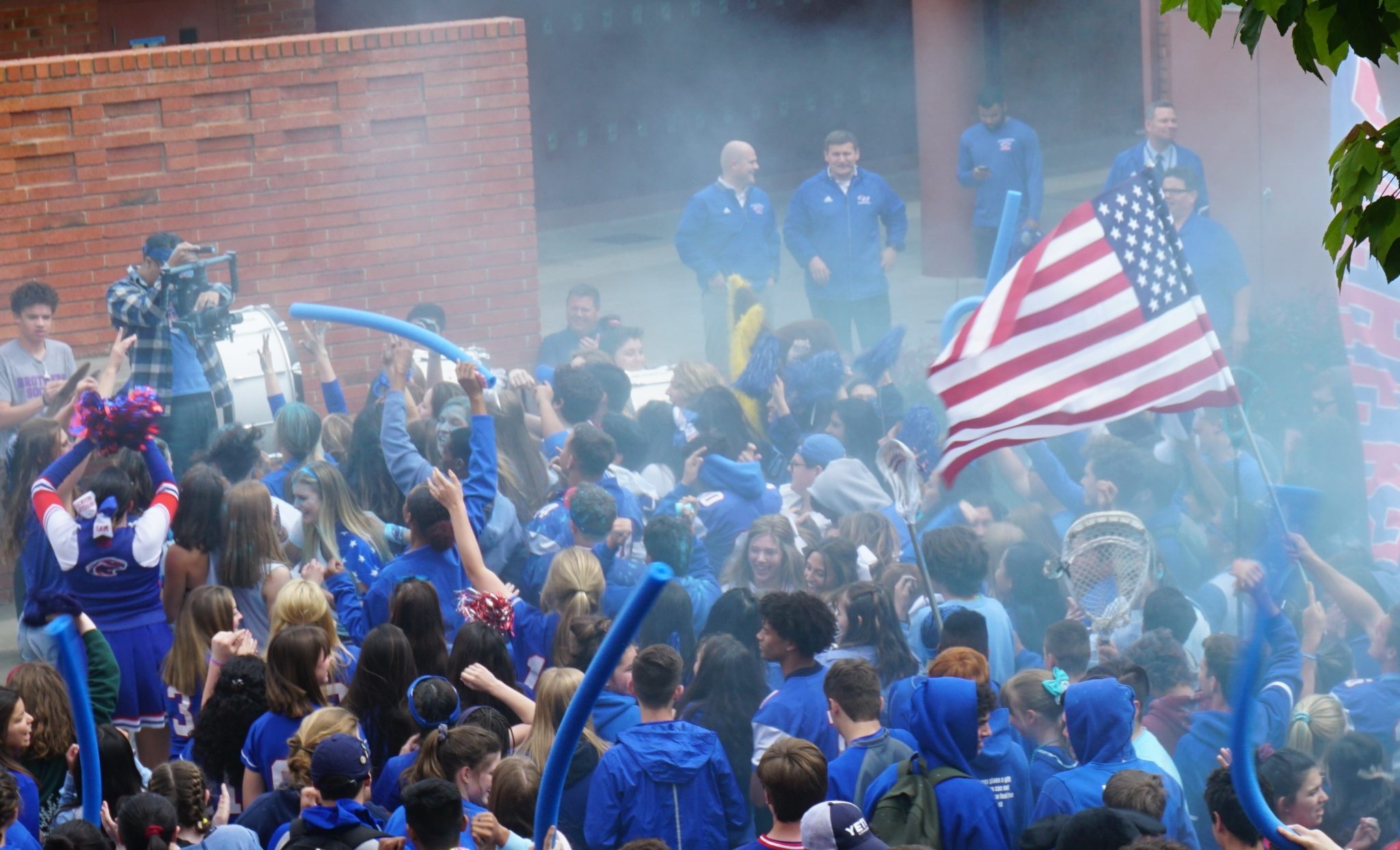 All you see is a cloud of blue powder. The Mary Lawn is filled with the entire student body. You hear the music blasting in the background.

The doors from the admin hallway fly open. A wagon rushes down the middle of the aisle as camera man Ron Camasura (’18) races to the Mary Statue. The crowd joins together in a Brothers chant. Balloons and beach balls fly in every direction. What’s this chaotic spirit that’s consumed the school for the past three minutes?

Schools coordinate Lip Dubs to show off their campus and student body by lip syncing a song while highlighting sports teams, clubs, and other campus activities. It’s almost like a school wide music video.  The Christian Brothers Senior Video class took on the challenge of putting together a video that could only be made in one take.

The first week back to school after Christmas break, a group of senior girls and I convinced KBFT director Mr. Brendan Hogan ‘95 that CB needed to bring back the Lip Dub. The last one was made in 2015, when this year’s seniors were freshmen. We knew it would be a big undertaking, but we wanted something big to represent our last year at Christian Brothers.

“It’s really hard to do and it takes a lot of effort,” Mr. Hogan says. Every year people try to do it, but it just falls flat. The kids really pushed to make it happen this year”.

Mr. Hogan has produced multiple Lip Dubs for the school, but he explained how two schools having a rivalry started this trend. One school, Shorewood High School, released a Lip Dub done in reverse and the video went viral. Seeing how well this project turned out for other schools inspired the KBFT program to join in on the hype. KBFT made their first Lip Dub in 2011, and the tradition conditioned as they made more videos in 2014 and 2015. 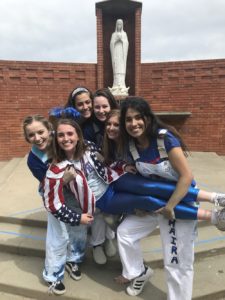 In 2015, students were pushing Mr. Hogan to make a Lip Dub and he was against it. But when Saint Francis dropped their Lip Dub video, he quickly got a group of students to create a rebuttal. That’s when the two split camera idea came to life.

Making a Lip Dub requires planning. Preparing for the actual shoot takes a lot of thinking so that everything can go as perfect as possible. We had to time every step down to the second and practice timing little things such as dropping balloons and confetti.

“We needed to plan out exactly where the singers would switch and the time stamps of the switches,” Co-director Sarah Donovan (‘18) explained, “We ran through it probably 30 times before the actual shoot.”

The Lip Dub planning is a long process. For starters, we had to pick a song — it’s really difficult to pick a song that everyone agrees on. We played different types of songs for almost three weeks in order to pick a song that fit perfectly. I actually played “Don’t Take The Money” by Bleachers for Mr. Hogan the first day we were listening to music, and he told me to shut it off within the first 20 seconds. After listening to countless songs that didn’t fit the idea we were looking for, we decided to give the original song a second chance. The song we were looking for had to have a clean lyrics, be upbeat, and portray a good message. We soon realized this song was everything we needed. 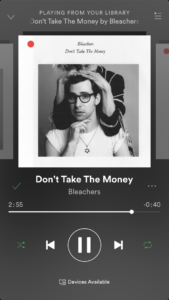 “Don’t Take The Money” by Bleachers

Once we picked the song, we held auditions for seniors and a few underclassmen and had them run through about 30 seconds of the song. After picking singers, we had to pair them up and figure out where everyone should be. Changes were made to the lineup probably 10 times. The next step was planning out every second of the song. We placed clubs, teams, and classes as best as we could but definitely changed it around many times. I made a list of all the supplies we needed like noodles, beach balls, and blue powder, and figured out who will be using which supplies before making posters and signs for each group.

After about three months of planning, we were still making changes and finding the best way to present things up until the day of the shoot; we still needed to shred paper to make confetti, blow up balloons, and run through the course a few times. The hardest part was probably figuring out the timing for everything.

“We wanted certain things to happen at certain locations and timing in the song, so our pace had to be near perfect,” Sarah emphasized. “Someone was always behind the camera yelling “faster!” Or “slow!!.” It took a lot of team work to get it just right, and it was definitely worth it”.

As one of the main directions on this project, I can agree that the teamwork and effort that was formed through this process added to the fun. I really enjoyed bouncing off ideas from one another and being able to put those ideas into action.

It was also a challenge finding students who were dedicated enough to show up to morning practices to rehearse their part. Mr. Hogan stressed how we have a standard of effort and quality that our program must live up to.

“Practice is hard and if you don’t practice it looks bad,” he wisely said.

Jacob Cherry (’18) is no stranger to putting on a performance. His role in the Lip Dub was lip syncing to the music with partner Jenn Roberts (’18). He explained how attending practices and missing a couple lunches was completely worth it.

“Practice is essential for getting the entire process ingrained in your head,” he said.

“Before coming to CB, I saw videos of past years’ Lip Dubs and I thought it looked like such a fun annual tradition,” Jacob said. 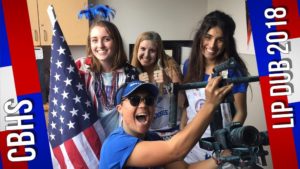 The crew after filming the LipDub

The best feeling was rushing to the KBFT studio with the Lip Dub crew after cleaning up all the confetti and balloons around campus. We put the SD card in the computer and everyone sat in silence waiting to see the rough cut. Mr. Hogan was staring at the screen like a little kid on Christmas morning. After watching the video for the first time, I looked at my co-workers and kept repeating, “Guys we actually did this”.

We watched the video at least ten other times before we started to edit. I don’t think that anyone working on the video had many expectations. We were all afraid of getting our hopes up. 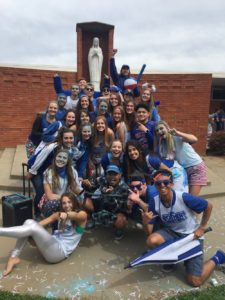 The singers after the LipDub

“We did everything we needed to do to prepare. You just have to hope that when things go wrong, they could be fixed,” Sarah explained. “I think that when you put in hard work, you should expect a good turn out, but also plan for mistakes and do everything you can to reduce the effects of those mistakes”.

The video turned out so much better then I could have expected. We received really positive feedback from students, teachers, faulty, and alumni. This video perfectly captures the essence of Christian Brothers and the spirit and pride the students have for their school.

“I was completely blown away by the final product,” Jacob said. “I was really happy that my senior class was able to pull this off”.

“We put so much thought and preparation into making the Lip Dub look professional but also super fun, so seeing how it turned out made all of us feel so happy,” Sarah says.

I’d be lying to you if I said the Lip Dub was easy — there were a lot of stressful moments. It’s hard to be a leader when the entire school relies on you to produce such a big project that still looks good. We couldn’t have done it without the help of our Lip Dub team of Sarah, Ron, Navneet Khaira (‘18), Julia Atlee (‘18), Hannah Kaplon (‘18), and Jules Fuhs (‘18). The students’ spirit also makes it a lot easier the day of the actual event. I hope that the junior class is willing to take on this big project and continue the tradition of a CB Lip Dub. It may be very time consuming, but I guarantee all the hard work was definitely worth it. 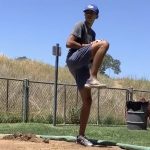 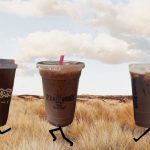 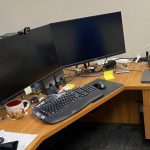