It started with a foreboding Schoology update: a PDF titled “An Open Letter to the Senior Class”.  Next was the orange flyers, displaying the letter once again. It drove home one specific point. We have to earn our senior privileges by staying in dress code. Later, administration issued an ultimatum, one that many of […] 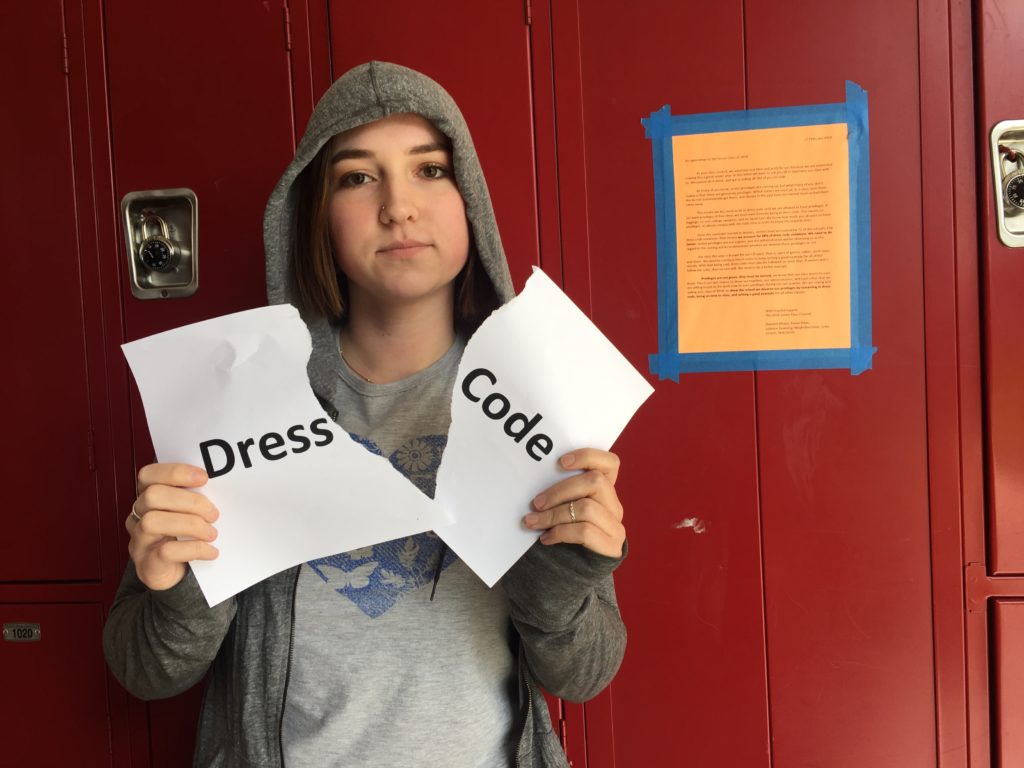 It started with a foreboding Schoology update: a PDF titled “An Open Letter to the Senior Class”.

Next was the orange flyers, displaying the letter once again.

It drove home one specific point. We have to earn our senior privileges by staying in dress code. Later, administration issued an ultimatum, one that many of us remember from last year. If we rack up more than 20 dress codes? Like magic, our modified dress disappears. However, to many, the current dress code is a difficult set of rules to follow. Not a day goes by when I don’t spot a pair of leggings or a non-CB/college sweatshirt floating around campus, and unfortunately, the majority of these items are sported by the seniors.

There are a myriad of reasons that seniors are the most likely to be out of dress code. Some highly value comfort, leading to leggings, pajamas, and sweats. Some feel that the CB dress code does not accommodate their personal style. Some are simply suffering from a severe case of senioritis and simply can’t be bothered to put in the work to find an appropriate t-shirt or pants without holes. Some students adamantly oppose the dress code system, period. They insist that leggings or non-CB sweatshirts will in no way inhibit them from being able to efficiently work or learn.

Unfortunately, as we are often reminded, Christian Brothers is a private school, and by agreeing to attend, we sign away some of the rights we would have outside of school. So it is, in fact, “fair” that the institution issues this ultimatum on the students. However, this does not keep many of them from protesting.

“It’s kind of dumb,” said Isabel. “We’ve been here for four years following their rules. We should at least get some leeway on dress code senior year.”

“I feel like we deserve to be able to express ourselves after wearing a uniform for three and a half years,” added Jordan Aceves (‘18).

The threat of no modified dress code, while frustrating, is not the only issue people have. Because the privileges are revoked based on the number of dress codes we receive — not the amount of people who earn them — the power rests in the hands of a small fraction of the class.

“It’s unfair in a way because a lot of the dress codes are from the same fifteen or twenty people, so why punish the whole class?” said Jordan. “They should do it by person.”

Gigi Ghilardi (‘18) agrees. “I think they’re focusing on punishing us as a group to keep us in line but we should be dealing with the individuals who break the rules,” she said.

“They should take away the privileges from people who have more than three dress codes or something,” Jordan suggested. “Maybe that would be better.”

As for now, we’re all in it together, and it’s not over yet. Our welcomed spring break may have made us relaxed, but we still have a few days before jeans are allowed in class. So, CB seniors, your peers implore you: stay in dress code.