Imagine flushing $92 down the toilet. When you’re paying the price of a concert ticket to take the AP Physics C: Mechanics exam, that’s what losing a well-qualified teacher can feel like. After Mr. Kevin van den Bogert announced in December that he would be departing Christian Brothers High School for a position at American […] 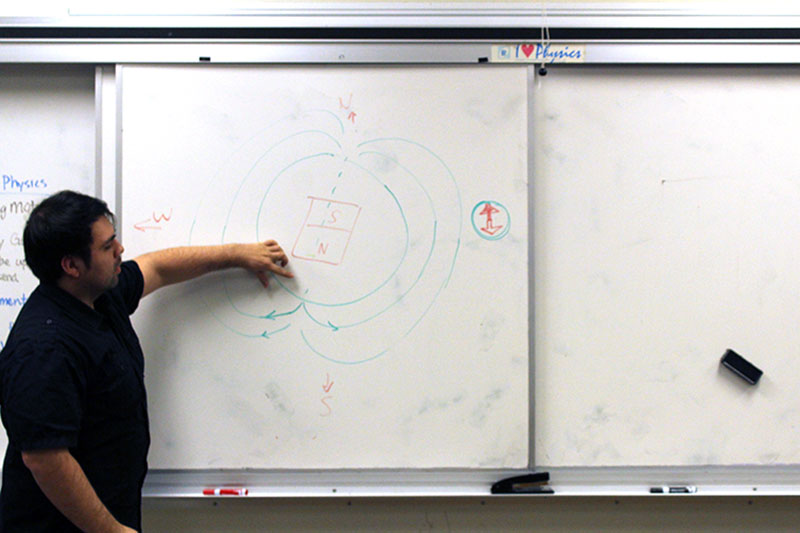 Imagine flushing $92 down the toilet.

When you’re paying the price of a concert ticket to take the AP Physics C: Mechanics exam, that’s what losing a well-qualified teacher can feel like.

After Mr. Kevin van den Bogert announced in December that he would be departing Christian Brothers High School for a position at American River College’s engineering department, Honors and AP Physics students spent nearly a month expecting nothing less than the worst possible scenario. AP Physics student Natalie Leclerc (‘19) quickly made up her mind: she would fail the AP exam, and there was nothing she could do about it.

“I was panicking,” Natalie said with a nervous laugh. “AP Physics is already an incredibly hard class to pass the AP test, and . . . losing such a good teacher halfway through the year, my first thought was like, ‘Okay, well, I’m gonna have to pay like, what, $100 for this AP test, and I know it’s a guaranteed fail.”

Although Honors Physics student Meera Khaira (‘18) didn’t have to worry about the AP exam, she was still upset about Mr. Bogert’s imminent departure. Like Natalie, she couldn’t help worrying that she would transition from a highly skilled teacher to an awful one.

Fortunately, these students’ foresight isn’t anywhere near the level of their science skills. After all, they’re physics students, not psychic students. As it turned out, Mr. Manuel Rodriguez would prove to be a worthy successor to their beloved physics teacher.

An opening for a teaching job in December is rare—Mr. Rodriguez certainly didn’t see it coming. He embraced this unexpected opportunity and applied for the job. His next task—an interview—allowed him to experience firsthand the welcoming atmosphere that permeates Christian Brothers High School. As he walked through the hallways for the first time, he fell in love with the school and its community.

“When I went for my interview, everyone was super friendly,” Mr. Rodriguez said with his signature smile. “At that point, I was like, ‘I really wanna get this position.’”

Once he was accepted for the job, his next task was to figure out a plan for getting through the semester. Having tutored at UC Davis, at Sacramento City College, and for the company College Track, Mr. Rodriguez already had some experience in teaching students about physics, but his new job at Christian Brothers High School presented a significant challenge: he would now be responsible for over 100 students’ science education.

“With College Track, the most [students] I’ve dealt with was probably like 20,” Mr. Rodriguez explained. “At that time . . . it just seemed like that was like a crazy amount. And now it’s like, well, not anymore, right?” he added with a chuckle.

How does a new teacher deal with this challenge while creating a smooth transition from one teacher to another? According to Mr. Rodriguez, it’s all about feedback. He regularly asks students about Mr. Bogert’s teaching style, and he tries to keep quizzes and homework assignments consistent with those assigned the previous semester.

And this strategy has been working. Students have encountered few, if any, difficulties in adjusting to Mr. Rodriguez’s teaching style.

“He’s done an excellent job by far,” Natalie said with contagious enthusiasm. “He exceeded all my expectations. . . . I really like his lectures, and I’m learning a lot, and I didn’t expect to learn this much in just the short time that he’s been here.”

Meera felt the same way. She was particularly appreciative of the extra effort Mr. Rodriguez dedicates to ensuring that his students understand difficult concepts. “When clearly the class doesn’t get something, he immediately jumps on it and goes over it so it’s not just him reading out of the book,” Meera explained. “It’s him taking time out of the class period . . . to make sure that not only are we learning new things, but we are also understanding the old things as well.”

With such high praise, there’s no doubt that Mr. Rodriguez has done a great job guiding students through what could have been a tumultuous transition. I’d wish him good luck getting through the rest of the semester, but it’s clear that he won’t need luck to succeed.