Luke: The Duke Of Training

Running out to start your warm up on game day, you see the other team ready. Blue and white jerseys fill the field with subtle hints of red outlining the jersey’s numbers on your backs. You and your team are faster and stronger than ever. But how? Luke Rayfield, Christian Brothers’  very own strength and […] 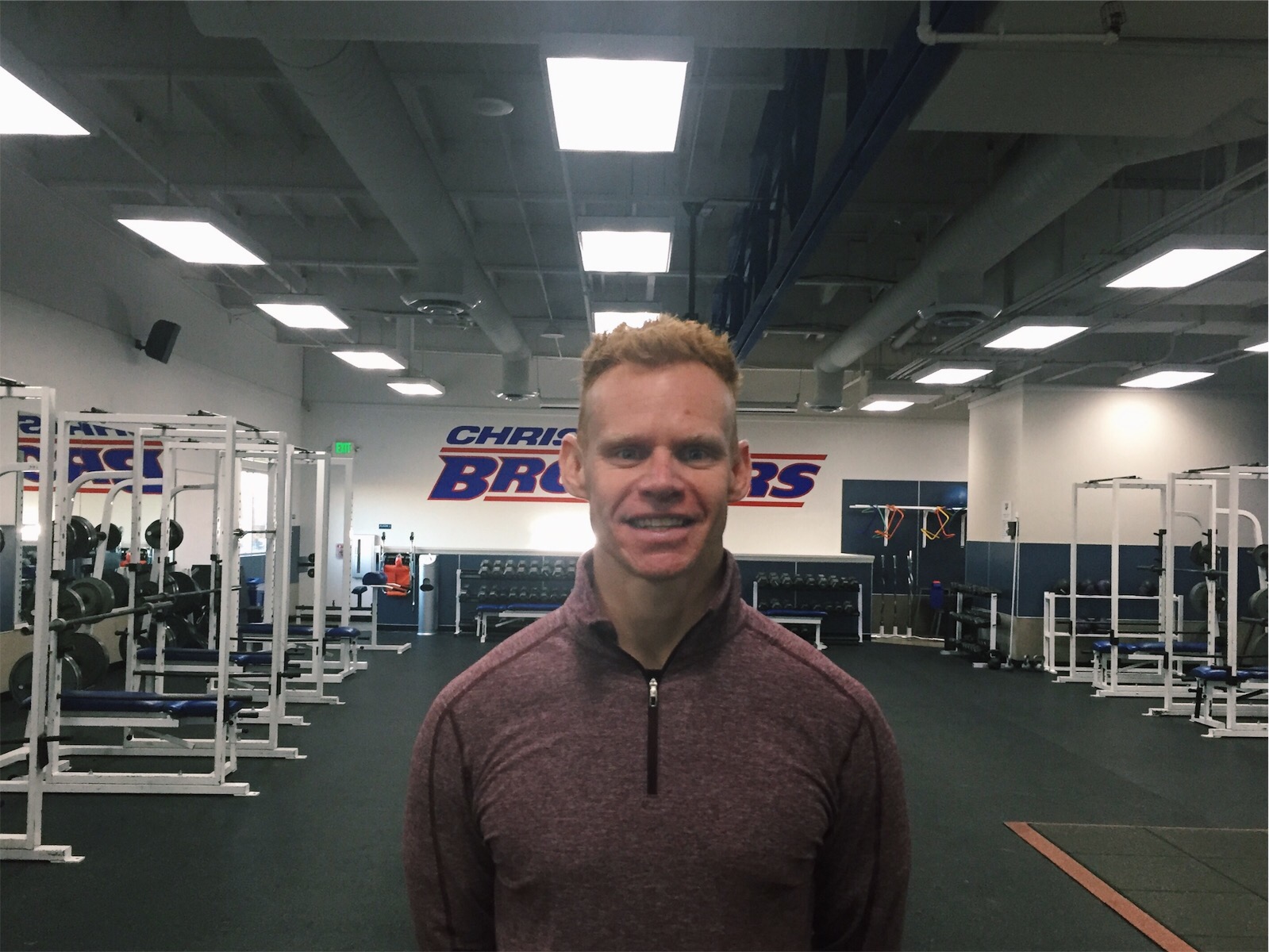 Running out to start your warm up on game day, you see the other team ready. Blue and white jerseys fill the field with subtle hints of red outlining the jersey’s numbers on your backs. You and your team are faster and stronger than ever. But how?

Luke Rayfield, Christian Brothers’  very own strength and conditioning coach, has been working here for four years. If you haven’t seen him driving around campus in the big truck, he can also be recognized in his normal head to toe outfit of Lululemon athletic wear.  He works with the athletic teams here at Christian Brothers to get them ready for the upcoming seasons. From fall to spring, Luke does it all.

He might just be a trainer for some, but to others he makes a day of practice better. Luke helps athletes one barbell at a time.

“I would say that normally when you think about having weights before running conditioning, you think of dying, but during lacrosse, having weights was something you looked forward to,” former lacrosse player Hailey Hunt ‘17 cheerfully says. “When we all walked up he was always smiling and cheerful. He gave you that look that was like ‘I’m going to moderately kill you with this workout, but it’s gonna be okay in the end’. “

“He is a very positive guy who makes us work really hard,” Varsity football player Jonathan Stone (‘18) says. “He always makes sure we are doing the lifts with the right form. He’s one of my favorite trainers.”

“The workouts would be tough, but in the end they helped us work on other strengths that would help for the rest of the season,” says Varsity basketball player Anna Claire Nelson (‘18). “I believe that with Luke’s help last year we were a stronger team, and that helped us achieve our goal of gaining a section banner.”

Besides being a part of the CB community Luke also spends his time working with Sacramento Republic FC and at Results training gym. He is part of the National Strength and Conditioning Association and is a Certified Personal Trainer. While working with CB students is a great, he says nothing can beat the Republic.

“It’s fun to be part of a team and work towards a common goal,” he says. “Everybody has a goal: winning the championship and producing.”

He explains that by working with the Republic, he gains relationships with the players and can help them and their team improve. Also he gets to see firsthand the success and the struggles that come along the journey.

While we know Luke’s success now, how did he get to this point in his career? Luke graduated from Sheldon High School as a three sport athlete, competing in basketball, soccer and golf for the Huskies.

“My first love was basketball, but I was better at golf,” Luke stated.

Luke committed to Cal State Monterey Bay and pursued golf, but tore his ACL in his sophomore year. While his chapter of collegiate golf took a pause, through rehabilitation, he turned to the next page. Luke found his new profession while he was on a journey to get stronger.

“I was rehabbing, I saw that side, and I wanted to continue from there. I also wanted to help athletes continue their sport and get better at their sport,” he says.

After college, Luke got involved with the River Cats here in Sacramento for a long time, which led him to the Republic.

“The owner of the Republic [Warren Smith] brought the River Cats to Sacramento. So I had known him for a while and then had done strength and conditioning with [Rivercats]. It was an easy transition.”

What drew Luke to the Christian Brothers community was working with high school athletes.

“I feel like you have a bigger impact on them not only their athletic career, but their development as a male or female,” he says.

As we grow up with in the four years here at CB, not only do we become better athletes, but we learn respect for all persons while working with Luke. As a competitor in volleyball, cross country, and lacrosse, I have improved my physical strength and learned to be a better teammate thanks to Luke.

Every workout means hard work and dedication. As a team, we learn to cheer each other on in the workout room no matter what the workout may be. As we all become stronger though RDL lifts or terrible leg bands, we push each other till the end. Luke’s energy and passion for what he does is emphasized when he shows us a new workout. 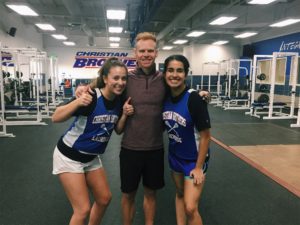 Luke with the author and lax goalie Navneet Khaira (’18).

While Luke works with all the athletic teams on campus, he has one in particular that is his favorite.

“Women’s Lacrosse” he says with a laugh.

The women’s team might be decked out in full Lululemon, but they aren’t shy to working hard and pushing the weight. While there has been a lot of sweat in the gym, there have also been funny moments that occur.

“Our entire team would wear Lulu and in our huddle he goes ‘can y’all chill with the Lulu’ and he starts laughing,” former CB lacrosse player Megan Walaitis ‘17 says. “It makes working out more fun with jokes that only our team and him know.”

Luke has put a positive twist on lifting and has helped CB Alum before they head off to play college sports.

“Luke helped me a lot for lacrosse at Fresno State,” Megan stated. “He taught me how to lift and that prepared me for college. If it wasn’t for him I don’t know if I would be able to lift that much weight or be able to perform because of the proper techniques I was taught.”

While some may think that Luke just tells us on the spot what to do, workouts are specially made for each sport. When you walk into the room, you look at the whiteboard to tell you what you will be doing that day. This part is always the scariest because you are hoping you don’t see the words leg bands on the board.

The white board is clumped into three boxes, each box having a rotation of three workouts with how many reps to do. Each workout in each box is repeated three times, which is called a cycle. What you put into your cycle is what you will get out. There is never just one body part being worked on.

Be prepared to sweat when you walk up the stairs hearing the loud music. In about an hour you will experience a full body workout, as it will be a leg, arm, core, and Luke day.