The Christian Brothers’ Ambassador’s Dinner is a special event where CB’s top donors attend a fancy dinner to eat, socialize, and see where their financial donations are going. For the last two years, I had the pleasure to work at the Ambassador Dinner. Lasallian Student Ambassadors working at the 33rd Ambassador’s Dinner this October were […] 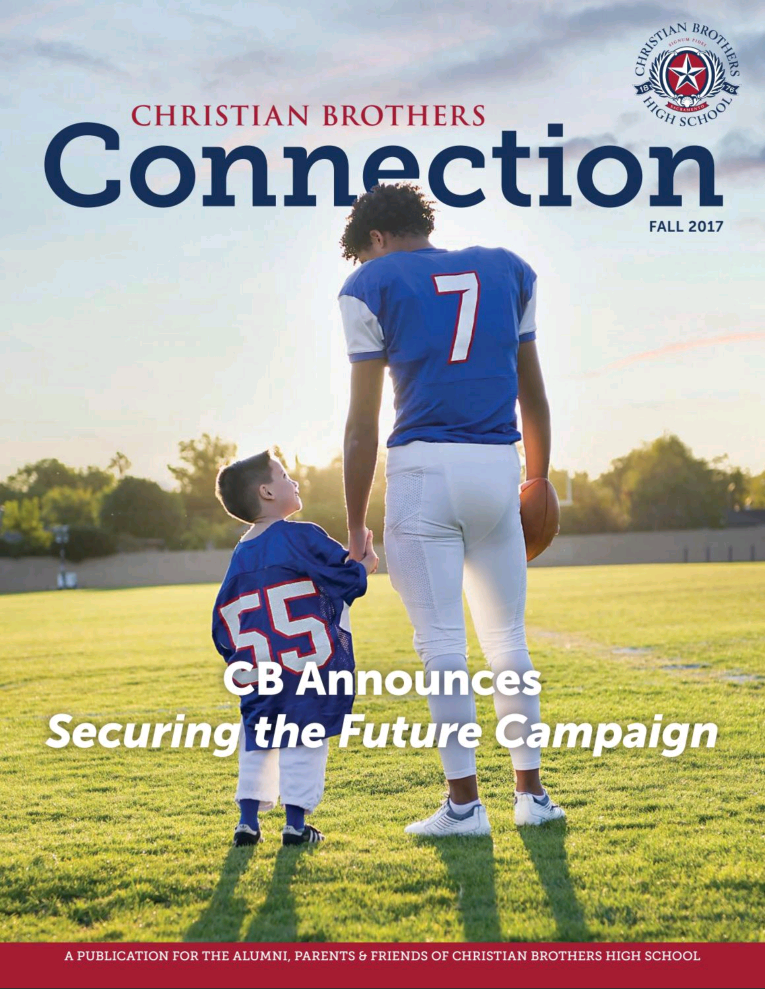 Athlete Tyler Green ’19 and a Future Falcon on the cover of the Fall 2018 edition of Connection Magazine, promoting the Securing the Future Campaign.

The Christian Brothers’ Ambassador’s Dinner is a special event where CB’s top donors attend a fancy dinner to eat, socialize, and see where their financial donations are going. For the last two years, I had the pleasure to work at the Ambassador Dinner. 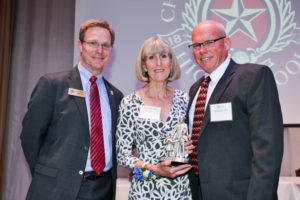 President Lorcan Barnes presenting an award to the Ambassadors’ of the Year.

Lasallian Student Ambassadors working at the 33rd Ambassador’s Dinner this October were told they were going to be part of a “very special announcement”. The night was hosted at the extravagant Croatian-American Cultural Center. It was an event as pompous as they come: cheese and meat hors d’oeuvres, older gentlemen and women dressed in formal attire, glass chandeliers dangling from the ceiling, and arranged seating. CB must have broke open the piggy bank for this one.

Why the fancy occasion? To thank our highest donors for making contributions — contributions which make up a significant chunk of the school’s income.

Mysteriously shrouded behind poster paper signs was the ever so “special announcement”. Student ambassadors working at the dinner took to the stage, presenting to donors that Christian Brothers had raised $7,423,842 for our latest fundraising venture, with the final goal to raise $12 million.

The project, coined the Securing the Future Campaign, is one of the school’s latest moves to renovate our aging campus. The new facility will come equipped with a six-lane track, a turf football field, permanent field lighting, new bleachers, and a press box. 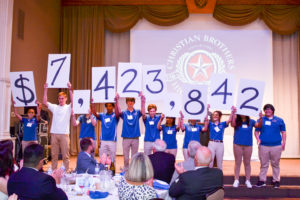 Lasallian Student Ambassador’s revealing the money raised for the Securing the Future Campaign.

In the last decade, CB has spent close to $20 million to build new facilities. The STEM Wing, the George Cunningham ’40 Performing Arts Center, and the Jack Witry Field House collectively cost around $21 million.

Initially, I thought to myself, “Really? Are we going to spend $12 million on this thing? How can building a track and athletic fields cost $12 million dollars? Why not just use the money for tuition assistance?” And then I started to imagine what other things $12 million could go towards…

Assuming we have around 1100 students, instead of the new track and field, that $12 million could get every student an $849.00 annual pass to Disneyland and California Adventure for 13 years. How about everyone getting Spotify Premium for 91 years? Or we could all become Costco Gold Members for 182 years! Maybe we can even buy the S.S. Christian Brothers Yacht? So with all the possibilities, don’t we have better things to spend our money on?

But after chatting with coaches, financial directors, and students, it became more clear to me why CB wants to invest so much into the aging sports facility.

Our track is the exact same one that Cross Country Head Coach Mr. Danny Delgado ’79 ran on when he was a student here 40 years ago. 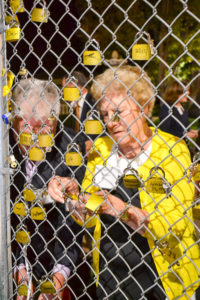 “We use to be able to have meets here,” Mr. Delgado recounts. “Even when I came back to coach, we still had meets here. But as soon as they built the field house, the field house came up to, and cut off one lane of the track, which reduced it from an eight lane track to a seven lane track.”

On top of a reduced number of lanes, the foundational materials composing the track have changed too. Originally, the materials used to construct the track were a mix of volcanic ash and decomposed granite. But over the years, the lighter volcanic ash compacted, leaving the surface much more inflexible than it was ever intended to be.

“It’s compacted stuff,” Mr. Delgado says. “If you put on spikes and you try to run on it, it’s more or less like running on concrete.”

A harder surface also makes it impossible for rain water to soak into the ground in a timely fashion. Certain areas of the track fill up with water after rainy days, making it “completely unusable and kind of like a swimming pool” according to Mr. Delgado.

“We can’t train on the track for many days after heavy rain,” he says.

“It always becomes a huge puddle after it rains,” long distance Track and Field runner Nicolas Sanchez (’19) informed me. “Then [in the following days rain], it becomes squishy and muddy and gross. In the beginning of the rain season last year, it was kind of hard to have actual practices. The track was just flooded.”

When Brendan Sample (’19) ran track during his freshman and sophomore years, he recounted that the field was “a mess.” He exclaimed, “It’s pretty bad. There are potholes everywhere and I almost twisted my ankle once or twice.”

And it’s not just the nonuniform track that causes injuries for our runners. “The occurrence of shin splints and other injuries skyrocket when you train on our track for too long. But the newer track will be made of softer materials that absorb the impact better. Injuries to the hips, the knees, and the ankles happen far less often [on soft surfaced tracks] than on hard surfaces,” Mr. Delgado commented. “It’s hard for me as a coach to see kids getting injured like that.” 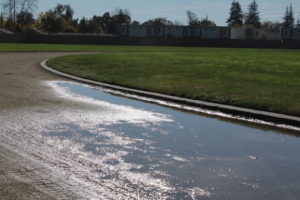 A huge puddle still lays on the inner portion of the track, days after heavy November rain.

This poses a problem for our athletes. What if our art students did not have good paintbrushes? What if our computer programming classes and clubs only had computer from the 90’s to work with? Or what if our campus had no WiFi so we couldn’t use our IPads in class? Our athletes likewise need updated facilities and equipment.

Our current track’s inability to soak up rain water stunts runner’s available training time. The roughed terrain also increases the likelihood for injuries. If we want to maximize our student athletes’ abilities, wouldn’t it be best for them to have the best training equipment?

I talked to Mrs. Nancy Smith-Fagan, Director of Advancement, about the funding that is being funneled into the project. Where exactly is the $12 million dollars going?

“We really don’t have that yet,” she told me. “We’re meeting with construction and landscape design professionals who are laying out the plans and cost estimates for us. So right now, we don’t have really defined cost estimates.” 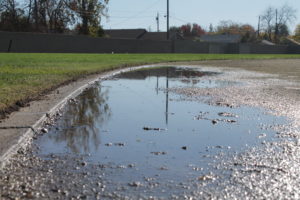 Another puddle on the track, with algae forming near its edges.

However, Mr. Delgado explained to me that “when you have an artificial track and field, you still need drainage. We will have to reconnect to the city sewer. And so that, it-of-itself, means you have to take what was originally put in there — probably in the late 1950s — and upgrade it to code. Meaning bigger, different pipes that can accept those small little rubber pieces from the turf and figure out a way to drop them out of the system so those don’t drain.”

On top of complying with new regulatory guidelines outlined by Mr. Delgado, cost for metal bleachers, electrical wiring for lights, and other materials will also account into the hefty $12 million budget for the project.

But not all $12 million dollars will be going towards construction of the new facility.

“Roughly $2.5 million will be going towards the school endowment,” Mrs. Smith-Fagan says. In simple terms, the endowment is a long term savings account. The school doesn’t spend the endowment funds, but does spend the money from the funds 4.5% annual interest rate. That money goes towards student scholarships.

Currently the endowment has $10 million dollars in it, but this new fundraising will expand the fund to $12.5 million. With this additional money in the endowment, the school can provide “ten fully endowed scholarships, forever,” on top of the $2.4 million dollars already spent on tuition assistance Mrs. Smith-Fagan says.

All the money for the Securing the Future Campaign comes directly from donors with the understanding their money will be used for the project. Mrs. Smith-Fagan emphasized many times that “[CB doesn’t] take tuition and pop it into the endowment. Tuition pays to run the school. Donations pay to build the school and increase the endowment”.

But beyond the finances of the project, there are many logistical reasons for building the new track. Our grass field is an issue for maintenance staff. Running on the field during practice or games rips out grass and harms the field’s condition.

Before CB was co-ed, this wasn’t a problem because only three sports used the field: football, soccer, and rugby. The field’s greenery used to have time to recover during the winter. We now have a women’s soccer team, a men’s lacrosse team, and a women’s lacrosse team to add to the list of sports.

The athletic calendar simply has no breaks in time that would allow for the field to rest and recover. Mr. Delgado and Mrs. Smith-Fagan see a turf field as the best alternative compared to the strenuous task of maintaining the natural grass.

Unfortunately for the classes of 2018, 2019, 2020, and 2021, this new track and field likely won’t be finished while we’re still around. But even though we won’t benefit directly from the new facility, Mrs. Smith-Fagan views this project in keeping with Christian Brother’s commitment to constantly improve its campus.

“Students that are here right now are enjoying the generosity of people who came before them. Families who were here before this crop of students helped build the Jack Witry Field House and the Performing Arts Center. The kids here now are benefiting from what came before them. So what we’re doing now is paying forward to the kids who are coming along after you.”

“Instead of putting money into administration, we are putting money into things the community can use and students can use,” Mr. Delgado says. “I believe it’s a better investment. When you do that, people recognize you are taking care of the kids, taking care of students, taking care of families. And if we end up having events where everyone can come, then we begin building a better and stronger community. Not just with CB, but with the Oak Park community. And I think when we work to increase the scope of where our community is and when our outreach is bigger, only positive things can come out of this.”