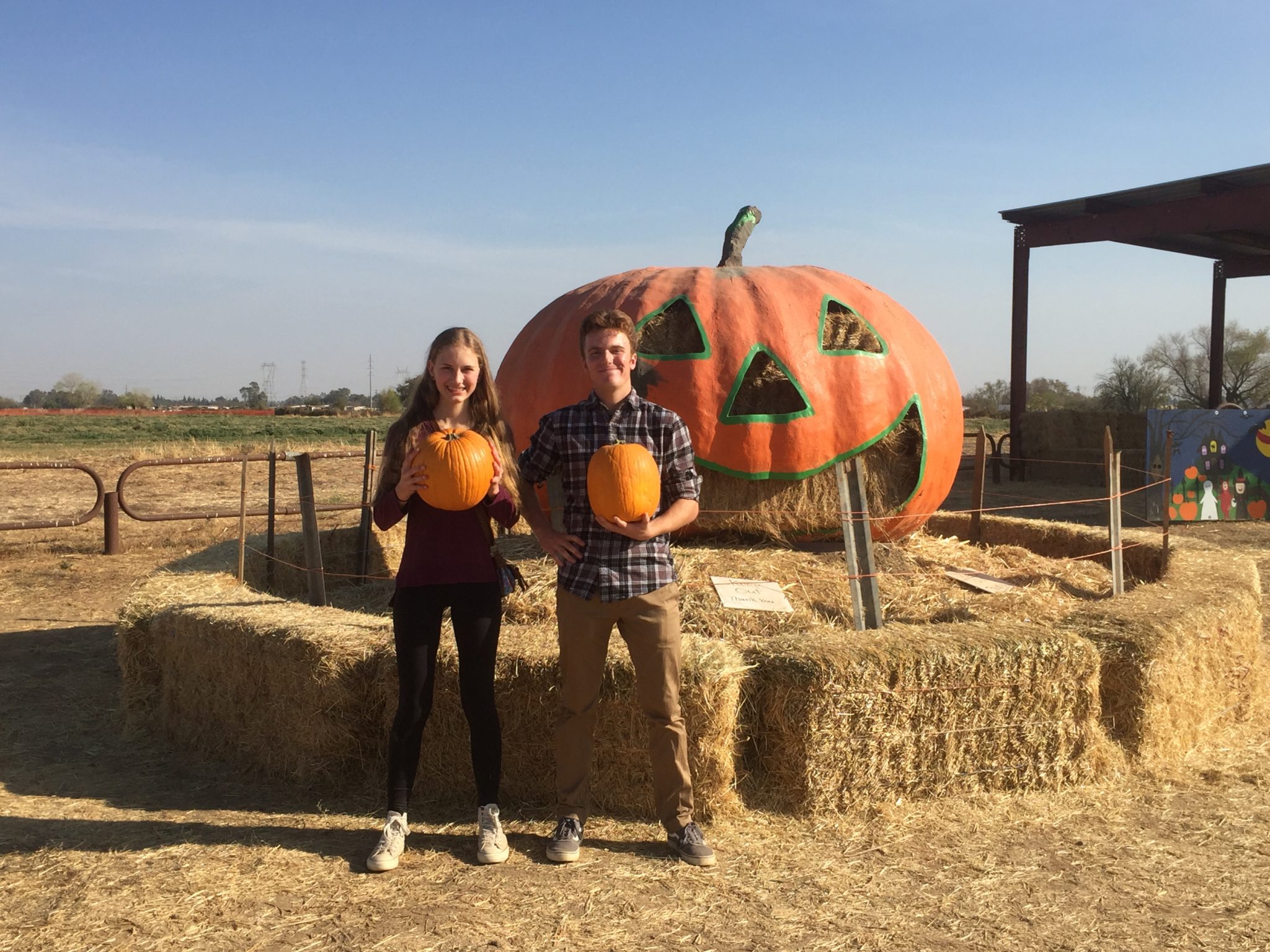 Sam and Michaela, at the end of a successful date.

As part of a semester-long tradition, the Talon chose two random Christian Brothers students, sponsored their date, and wrote an article on it.

Alex: I think that with the overwhelming success of the first Talon Blind Date, a sequel was only inevitable. Which can be seen as a good thing or a bad thing.

Delaney: I haven’t had any experience with blind dates before, nonetheless Talon Blind Dates, so when Alex asked me to co-write this edition I was excited. Finding a girl was relatively easy; Alex suggested Michaela and it seemed like an interesting choice. What would she do when she was the subject of the article and not the author? Michaela was also enthused at the notion of getting a different perspective.

“I’m super happy that I could be on the other side of the experience,” she said.

Most people are nervous before any type of date, but as for preconceptions and nerves, Michaela had little to none.

“I didn’t really think about [the date] until this morning and then I was like ‘Oh, this is going to be interesting,'” she explained. “I didn’t know who it could be!”

The one thing she was nervous about? The location.

“I’m pretty sure I haven’t been to the pumpkin patch since I was five!” she laughed.

Alex: I remember that the previous Talon Blind Date was set in a freak rainstorm. In true Talon fashion, Delaney and I decided to overcompensate on this date by choosing the hottest day in October. It was a shock to all involved — everyone but Delaney was wearing long sleeves and pants.

Sam was looking sharp in with his brightly colored, heat absorbing flannel. Delaney was particularly impressed, “joking” that it looked his mom dressed him. I was also awed — by Sam’s fashion sense because I trust Sam’s ability to dress himself.

But our opinions were irrelevant. The most important person, Sam’s date, had this to say: “I dressed way too warmly for the occasion, but I’m glad I wasn’t the only one.”

As Michaela’s co-worker and friend, I can attest to the fact that this quote means she was utterly dazzled by Sam’s wardrobe. Despite blowing us seniors away, Sam had regrets.

“I do regret [this flannel],” our junior confesses. “It was a mistake. It’s very hot.” 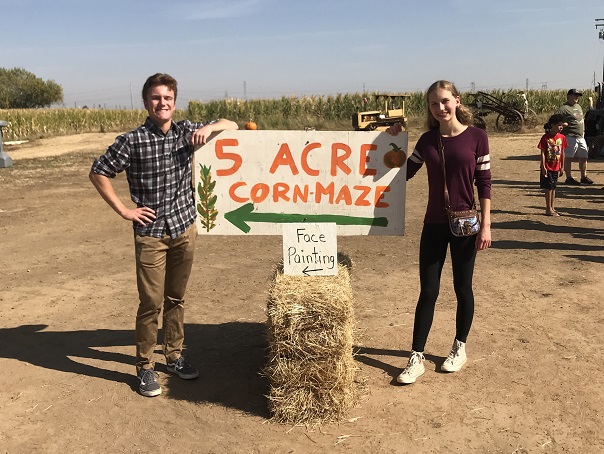 Sam and Michaela are looking HOT with a fuzzy sweater, flannel, and 90-degree heat.

Delaney: When I arrived, I met Michaela at the entrance to the pumpkin patch. We chatted while lamenting about Alex’s tardiness — Sam had arrived before him.

“I thought it was going to work out like last time where Alex would meet with Sam and you would meet with me and then we would meet together,” said Michaela. “It was kind of interesting to meet [Sam]… before Alex even got there.”

It was interesting for all of us, as Alex was supposed to meet up with Sam in front while I waited with Michaela. Poor Sam was left lost and confused.

“I was looking for Alex and he wasn’t there,” Sam rightfully complained.

Eventually, Sam found his way to where Michaela and I were waiting. When I introduced them to each other I expected awkwardness — it was a blind date after all! “Blind date” is basically synonymous with “awkward”. But Sam and Michaela started chatting like they had known each other for years, defying my preconceptions.

Michaela put it best: “Alex is so irresponsible”.

Alex: The way everyone complained, one would have thought I completely blew off the event. And sure, my nap went a little late, but just five minutes. Five minutes could easily be explained by traffic or an incompetent Uber. But no, the others were simply incapable of doing anything without me. Only with my presence could we set off.

Despite a lack of pumpkin cannon (which is a thing!), Roemer Pumpkin Patch was quite a fun patch. We started into the corn maze, which was much too big. With the many twists and turns, our couple weren’t the best at finding their way. 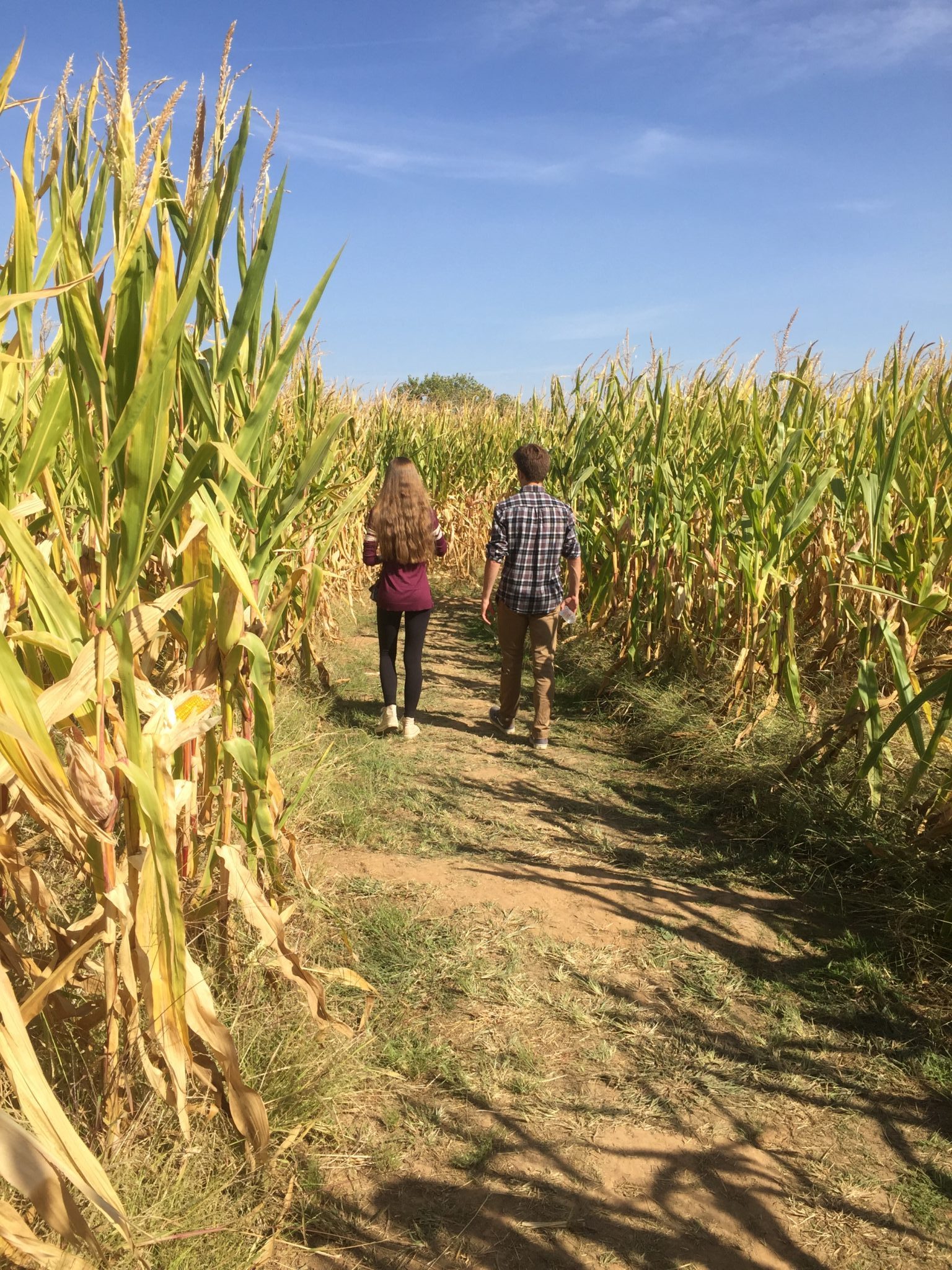 The sneaky Talon crew sneaks behind and snaps pictures of the unassuming couple.

Delaney: The corn maze was not as easy as we thought, that’s for sure. And it wasn’t any easier with Michaela and Sam leading the way — both were so engrossed in conversation that it resulted in many instances of walking in circles. Michaela even admitted to having a less than stellar sense of direction.

“I am not good at directions — I literally have to hold my fingers up to see which side makes an L,” she said before demonstrating.

There were a few instances of intervention by Alex and me, but only when it seemed like an escape from the maze was hopeless… or when Michaela and Sam asked for help. For the most part, we kept to ourselves, stealthily following the couple.

Alex: Not to name names, but a certain Talon staff member found a shortcut and asked the couple to sacrifice their integrity and leave the maze through a fraudulent little path through the corn. Pressured by her questions, our couple agreed to cheat.

Delaney will say that our couple was itching to get out of the maze, but maybe I was watching a different couple. They kept getting lost because they so lost in conversation — they never paid attention to which way they were walking. 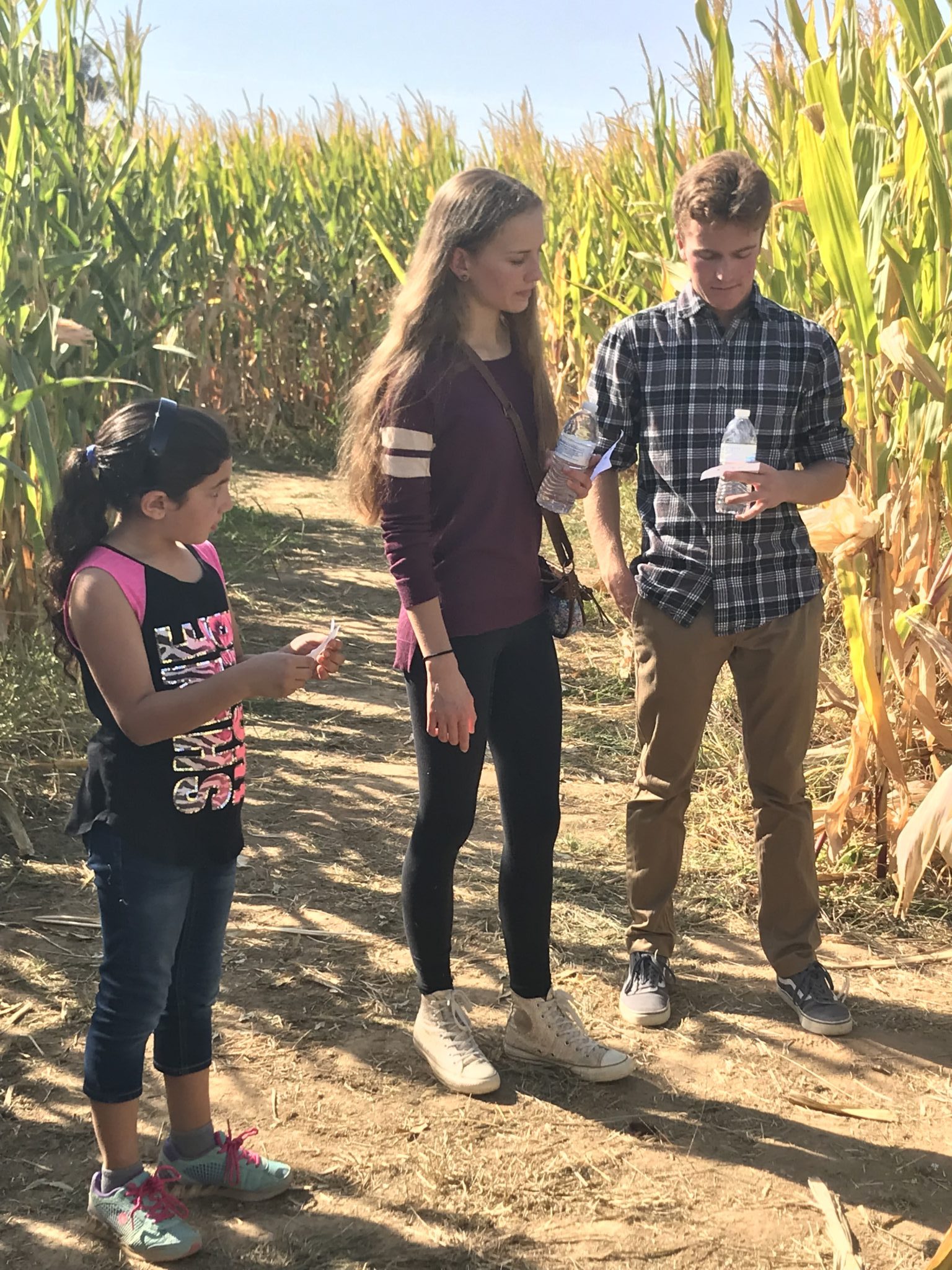 A small child, staring in awe of both Sam and Michaela’s chemistry and lousy senses of direction.

Delaney: I jokingly asked if they wanted to sneak out on this path that had obviously been used many times before, and Sam jumped at the opportunity. The poor guy was burning up in his flannel! And Michaela admits that the shortcut was for the best.

“I enjoyed the maze while we were in it, but it was probably a good thing that we found our own shortcut,” she explained. “Neither of us was really that good with directions, and the Talon ninjas behind us kept laughing when we made the same wrong turns multiple times.”

Yes, we were laughing, but in retrospect, it wasn’t really their fault. That maze was hard.

After sneaking out of the maze — come at me, Alex — we lined up for the tractor ride to the pumpkin field. Yeah, that’s right, we got to ride a tractor! What says “Fall” better than a hayride?

As we stood in line, Sam and Michaela continued to chatter away and learn more about each other.

“It was really fun talking to [Michaela] because she’s so interesting,” said Sam. “I found out she lived in Australia and that’s so cool. I didn’t know her at all [before this], so it was nice getting to know more about her.”

Alex: The tractor drove us to the pumpkin patches which were almost picked clean. But still, picking pumpkins was fun. The field was large and we still found some really great pumpkins. 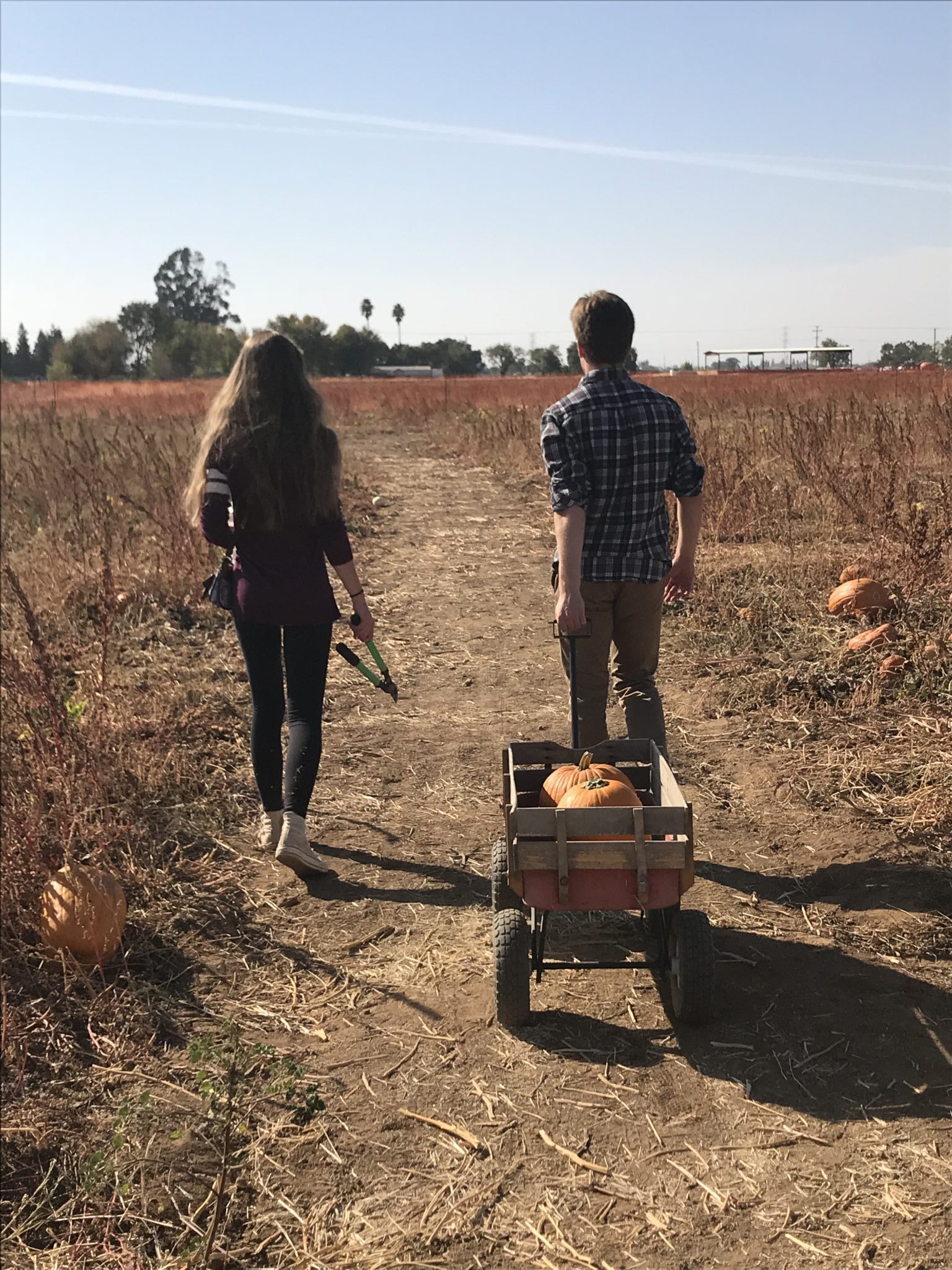 A pumpkin wagon being pulled by… Sam?

I also have to mention this picture of Sam pulling the wagon. This photo is fake news. I pulled this wagon all throughout the fields while our couple talked comfortably. It was my pain and toil that transferred the pumpkins from farm to cars. Which is fine; they should enjoy themselves. But I just wanted to put that out there.

It is worth mentioning that while I laboriously pulled the wagon, Michaela and Sam’s conversation never faltered. And despite the constant yabbering, they even managed to pick two exceptional pumpkins.

Delaney: After the pumpkin picking, we headed to the tractor for our ride back. The only issue? There wasn’t enough room for Alex and me. And guess who didn’t notice? That’s right — Michaela and Sam.

“We didn’t even notice until everyone was getting off and you guys weren’t there!” Michaela explained.

Alex and I hitched a ride in the next tractor back to them, expecting to see them looking lost and confused without us. But no, when we saw them they were as talkative as ever, simply wondering what took us so long. I know Alex and I keep mentioning their steady conversation, but it’s a big deal. My biggest concern was that they wouldn’t know what to talk about and awkwardness would ensue. But that turned out to not even be an issue — their conversation never seemed to fall into a lull.

After reconvening, we paid for the pumpkins and decided to go to the picnic area to talk about the events of the day… but not before some taking some awesome pictures! 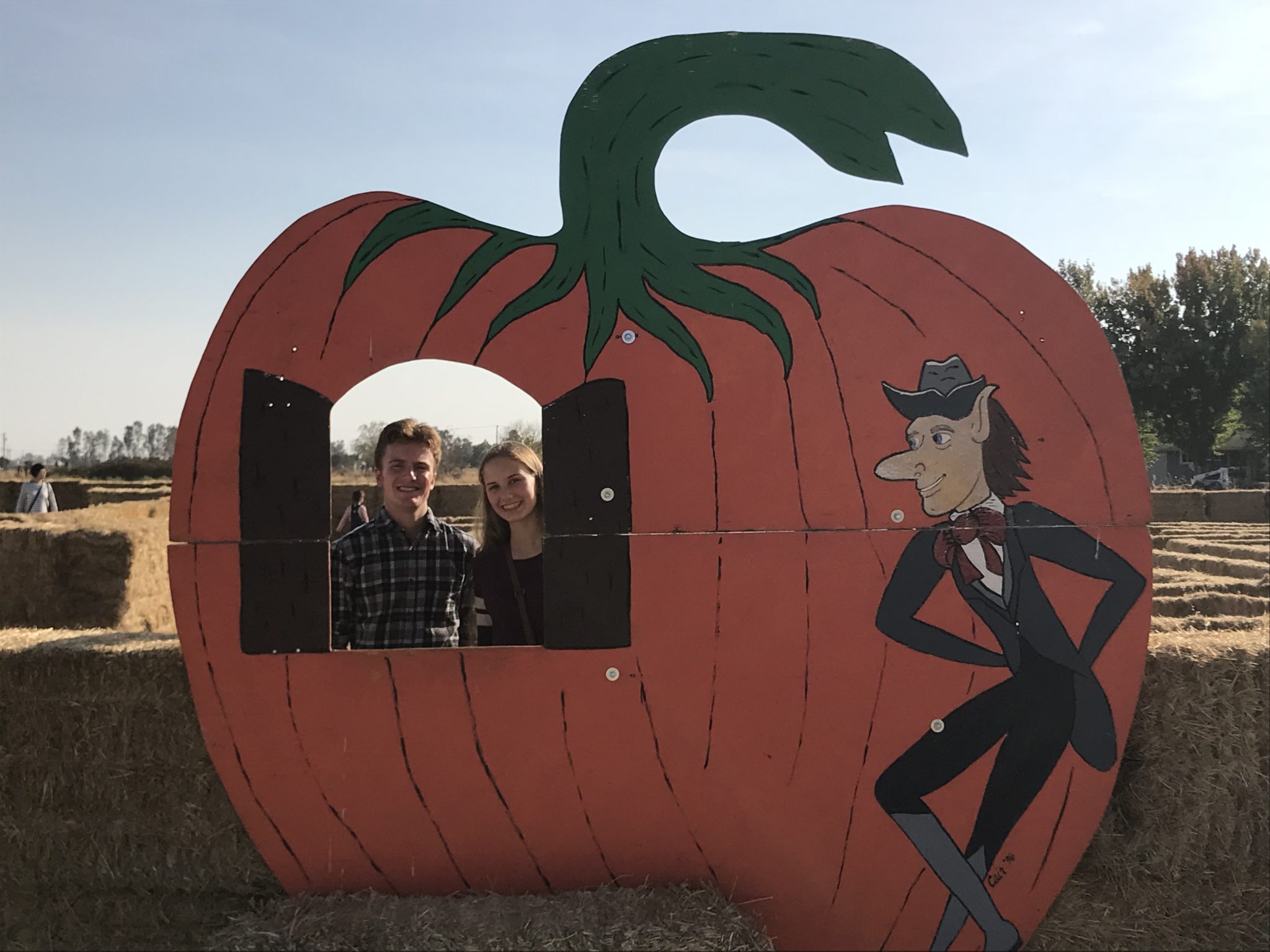 One such awesome photo.

Alex: As the Talon Blind Date veteran, I’m really happy with how everything went. Cheap thrills in the corn maze, free tractor rides, and even cheaper pumpkins. The generous Talon team — including me, Alex Mantong — even bought Mr. Anderson a little gourd. 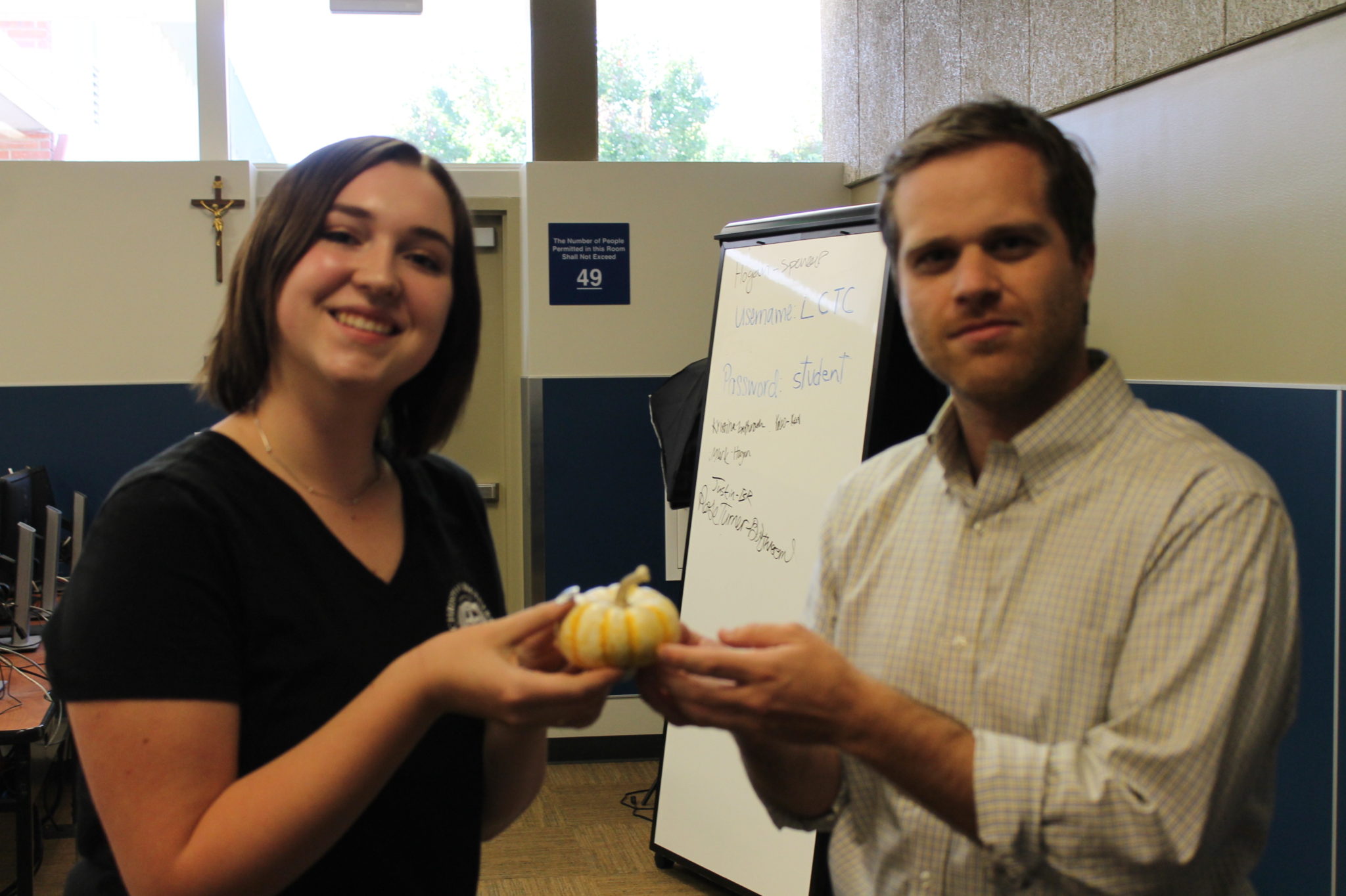 A gracious Mr. Anderson, touched by the TBD Team’s kindness.

An interesting point of note is that Michaela has now been on both sides of the Talon Blind Date experience. As former (and hopefully future) partners-in-crime, I think she had some interesting insights on our brainchild.

“Next time we’ll definitely have to check the weather and warn our date-goers or maybe even do something inside for a change,” she reflects.

“Being on the date was fun, but I think I definitely prefer playing matchmaker/spy.”

Delaney: I hadn’t met Sam before this experience, and I was honestly so impressed when he agreed. I feel like most juniors in general would shy away from a date with a senior, especially a blind date. Being willing to try new things and put yourself out there is really admirable. When I asked Sam and Michaela if they would suggest others follow suit, they both answered with a resounding “Yes!”.

“The thing with a blind date is if you don’t know what’s going to happen you don’t have any expectations, so the outcome is always good,” Sam says.

Alex: I’d like to say that Talon Blind Dates aren’t the only way to put yourselves out there at CB. We have lots of clubs and activities, sports and such. Take advantage of our great campus and resources!

Delaney: I think everyone involved had a good time. Michaela and Sam spent the afternoon getting to know each other and getting lost in the corn maze together, a bonding experience like no other. They even got some awesome pumpkins to take home as a reminder of the date. All in all, this fall date was a successfully delightful time. 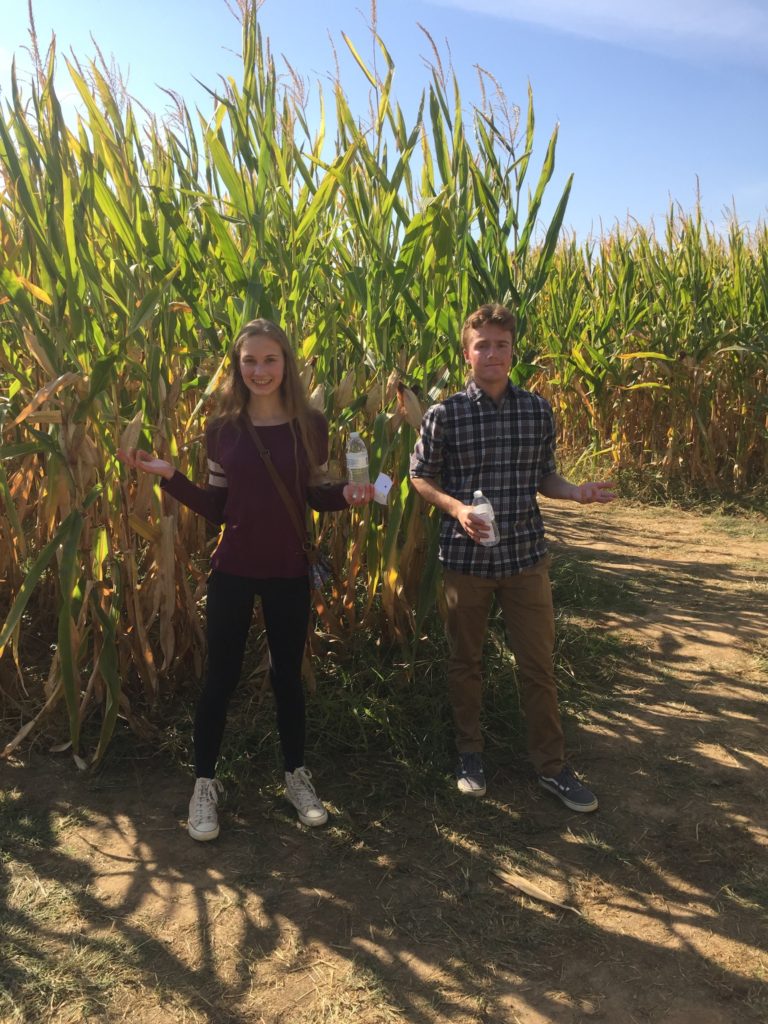 Sam and Michaela having a delightful time, even while lost

Alex: A delightful time yes, but all good things must come to an end. Like this Talon Blind Date. See you next semester!