College students seem to be stuck in a bad game of monopoly. Pass one year of college and pay $200, or rather, $25,000 to $75,000. Next thing you know, you’ve landed on bankrupt. As application deadlines approach, the looming question of “how can I graduate with as little debt as possible?” hangs in students’ minds. […] 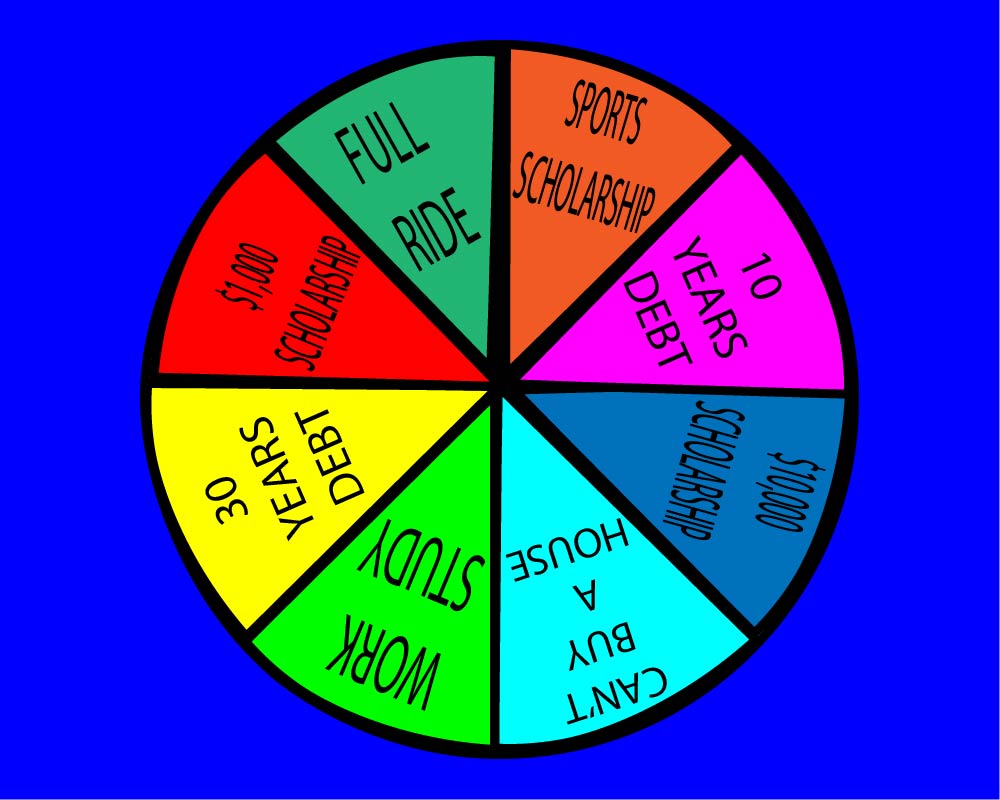 As application deadlines approach, the looming question of “how can I graduate with as little debt as possible?” hangs in students’ minds. In addition to that, Caeley Kelly (’18) “[does] not want to cause [her] parents any unnecessary debt”. None of us do. More students are taking alternate routes to avoid price tags even if that means not taking the first path they imagined.

The amount of students choosing to save money by attending junior college has risen. In addition, more students are pursuing high paying careers and not senior care, teaching, and social work careers because, although they benefit society, those jobs don’t pay enough money to justify a college education to qualify.  The pursuit of the same high paying careers creates high competition for limited jobs, leaving more graduates who took on debt to attend law, medical, and grad school unemployed or in a low paying tier of their job market.

In the words of wise Melanie Toth (’18), “it’s just not practical to spend soooo much money on college, especially if your dream path and career has a riskier job market.” Most students our age share Melanie’s opinion and recognize the rising wall of money between us and our education, which is something I realized when discussing college with my  friends and classmates lately.

I think Isabel Nguyen (’18) says it best: “for lack of better words, college tuition is irksome.”

Even though the cost of college makes Isabel cringe, it really will not impact where she chooses to go to college.  But, she does recognize she is the eldest of four kids, and no matter where she goes, “[her] family may have to sacrifice and budget more.”

Many CB students are a lot like Isabel in this sense. A decent amount of us are lucky enough to be in a comfortable situation where getting financial aid packages would be nice and definitely help, but if we don’t get them, it will not make or break whether we go to the university we love.

But for another portion of Falcons, the cost of college does play a role in where they will be learning for the next two to four years.

Going to a more affordable college may include sacrificing a desired major, school-specific opportunities, valued activities, and preferred community. Some students dream of attending schools other than these, such as private schools and out-of-state public schools dotted all over the nation. Popular and well-renowned schools such as USC, Pepperdine, NYU, Harvey Mudd, Santa Clara, and more have raised tuition to the lovely price tag of $65,000 to $70,000. Out of state schools range in cost; you can spend $33,000 at UNC Chapel Hill, $50,000 at The University of Oregon, and $65,000 at The University of Michigan at Ann Arbor.

Jon Berkley (’18) has approached the college search realistically with his and his family’s budget in mind.

“I mean there are schools that I would love to go to and could easily get into, but they just would break the bank,” which forces our CB senior to “draw the line and say ‘I just can’t go there.’ Which sucks.”

These expensive schools with sizable endowment funds and marketing tools are typically the most prestigious and attractive schools. Isabel thinks these particularly universities are highly overrated and high school students tend to “believe that if we can’t get into the best or most famous school, we won’t be able to succeed.” Simply sitting in a Princeton, Harvard, MIT, or Duke classroom will not guarantee you any sort of success or happiness.

There is a silver lining given that we are Californians. We have the luxury of the UC’s ($34,700) and CSU’s ($25,336), which are both more affordable and nationally recognized schools. In addition to our in-state public univeristies, we qualify for Western Undergraduate Exchange (WUE) and residency programs public university are available in certain states such as Utah or Missouri (16,800).

Not to mention how lucky we are to have our wonderful Counselors Ms. Melissa McClellan, Mrs. Blaire Moskat, and Mrs. April Melarkey, who send out regular reminders about scholarships and financial aid deadlines.

The facts show that college tuition is rising and it is not stopping anytime soon, so we just have to get creative. Your education is ultimately what you make of it and how much effort you put into seeking out opportunities.