After years of unprecedented prosperity and success, the Christian Brothers community is under the leadership of a historic principal. Mr. Chris Orr, a Sacramento native, has a past with the city and CB that makes him qualified as our new leader. “I was born and raised here in Sacramento and am a third generation [Sacramentan],” […] 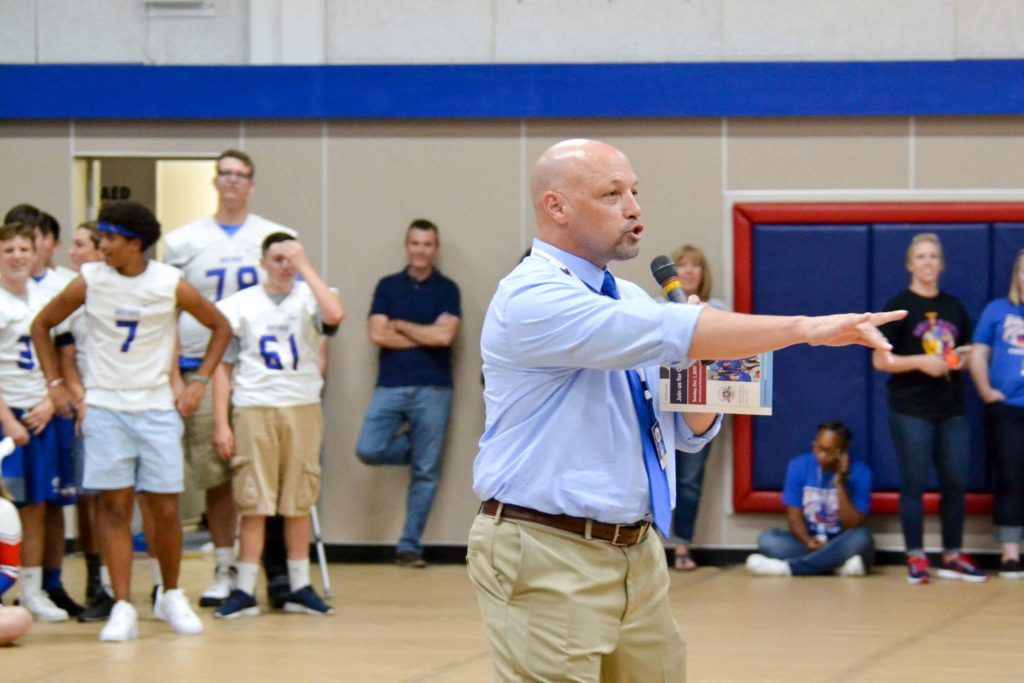 After years of unprecedented prosperity and success, the Christian Brothers community is under the leadership of a historic principal. Mr. Chris Orr, a Sacramento native, has a past with the city and CB that makes him qualified as our new leader.

“I was born and raised here in Sacramento and am a third generation [Sacramentan],” Mr. Orr said with extreme pride “My parents are both from Sacramento, my grandparents are from Sacramento. I have Aunties and Uncles and Grandparents that have not only come through Christian Brothers, but have been part of the Sacramento community, more specifically Oak Park for a very long time.”

Mr. Orr brings a knowledge of the history of Sacramento that will be beneficial in achieving his goal of growing Christian Brothers beyond its role as a school, but as an organization dedicated to growing the youth of Sacramento.

“I have always been involved with kids, and [getting into] education was the best decision of my life,” Mr. Orr said. “Education is the civil rights movement of our generation, and I think it is the tool we should use to fix [inequality] in America.”

Mr. Orr’s strong opinion on the importance of school gives our motto “Enter to Learn, Leave to Serve” special meaning to him.

“I want our [CB students] to go out and make every community better,” Mr. Orr explained, “I think if [Christian Brothers] keeps producing the types of young people we have been producing, [CB is] going to impact the world in a big way.”

While all schools are built around a student body and faculty, Mr. Orr thinks Christian Brothers is truly unique in the sense that it harbors one of the most welcoming and supportive communities he has seen.

“There are not a lot of schools that have this kind of commitment from both the faculty and parents,” Mr. Orr added. “That kind of dedication is uncommon in most other schools. It is special to have all of that commitment for one school.”

Even with all of the community and full support from everyone at Christian Brothers, Mr. Orr does not want to rush into changes, but rather build upon what CB has been doing right since 1876.

“It would not be wise of me to come in with my own agenda looking to change things. If things are running well I want to be able to help and support that.”

Mr. Orr touched on the fact that we “have a lot of great minds on this campus, not only teachers, but also students”.

“Initially my goal is to listen to the [CB community] and hear what they want, and student involvement is a big part of any school,” he said passionately.

But his plan to keep away from change does not mean we will not see improvement, which is one of Mr. Orr’s biggest desires for the school.

“We are going to try and continue to be great,” Mr. Orr said. “Our academics are super good, and I want to challenge that [to be better]. Our athletics are very good, I want to be elite. Sometimes you look at a school and call it an athletics school, or that’s an academic school, or an that’s arts school, but my question is why can’t CB be all of them? It is not an ‘either/or’ — its an ‘and’.”

With this apparent commitment from Mr. Orr, there is no doubt that he is going to has massive dedication towards advancing Christian Brothers. However, with this responsibility, Mr. Orr had to give up a hobby he has had for 15 years, and this side job might surprise you.

“I have always been a proponent of athletics.” Mr. Orr said, “After I graduated college I wanted to stay in athletics, so I started refereeing basketball. I refereed high school basketball for close to ten years, and then I got picked up by some college conferences. I have been all around the western United States to referee college basketball. Once I took my job here [at CB], I realized I had to give it 1000% [of my effort]. So I recently retired, in a sense, from that commitment, but I am comfortable leaving it as I feel that I am home here at CB.”

So when you see him in a suit and tie walking around 4315 Martin Luther King Jr. Drive, know that Mr. Orr has an immense amount of commitment and dedication to his job. From now on, expect his intensity and willpower over the next few years here at Christian Brothers High School.