When it comes to discussions about politics, most people prefer to avoid the topic altogether. They aren’t confident enough in their ideas or they are afraid that their conversation will devolve into a heated screaming match. But there are some students who are not afraid to bring their political beliefs into the heart of the […] 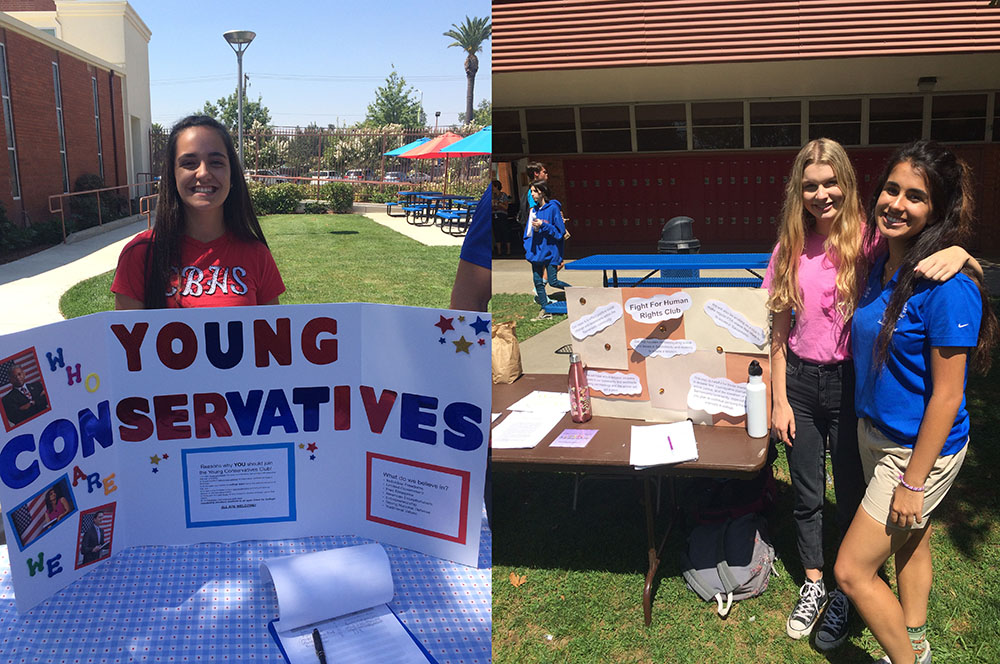 When it comes to discussions about politics, most people prefer to avoid the topic altogether. They aren’t confident enough in their ideas or they are afraid that their conversation will devolve into a heated screaming match. But there are some students who are not afraid to bring their political beliefs into the heart of the CB campus.

If you were at CB on the most recent Club Day, you were probably walking through the lawn, overwhelmed by the sheer number of new clubs to sing up for. You may have seen the club set up by the chapel, blasting patriotic tunes and handing out free candy. If these all went unnoticed to you, you probably picked up on the long line of students standing at the front, waiting for a chance to sign their names to join a club for which they all shared a burning passion.

“I’ve never been so proud to be a CB student” an underclassman gushed.

For students who bleed red, white, and blue, the brand new Young Conservatives club is the place to be.

Gigi Geach (’18) the founder of the club, shared some details about the club in addition to clearing up any misconceptions that may have been forming. She feels that it can positively contribute to the inclusive environment CB champions among its students.

“Over the past years, I have seen so many conservative students shy away from political discussions and hide their views out of fear of being criticized or labeled as something they’re not,” she explained. “After President Trump was elected, these problems only became worse. I felt that it was time to create a forum for conservative students to openly discuss their beliefs and let others know what we actually believe in. That’s part of the reason we chose the name ‘Young Conservatives’ as opposed to young Republicans. I wanted to have a club where people have a similar understanding of ideas, and values, not simply one were students learn how to vote Republican.”

While it is certainly admirable that she has started a club where she can express her views, Gigi had to address the fact that not everyone has the same beliefs as her. When some students hear about a club on CB that is conservative-minded, their first reaction would be to think that the club wouldn’t be open to non-conservatives, and it would appear as if CB was choosing to endorse one set of beliefs over the other. But as Gigi explained, that is simply not the case.

And for those students who lean more to the left, there remains a spot on campus for your beliefs. Fight for Human Rights was another club standing proudly outside on the main lawn, inviting more liberal-minded students to join their club. As club co-presidents Navneet Khaira (’18) and Juliet Tochterman (’18) break it down, the Fight for Human Rights club plans to take a very active role on campus.

“Nav and I decided to start the club when we went to Cornell this summer” Juliet says. “We ended up taking a human rights class at Cornell and we loved it. We decided the best thing for us to do would be to take it back with us to CB and bring support for what we are passionate about. We want to raise awareness for human rights issues in the Sacramento region, and we want to get a lot of active participation, get young people involved.”

The club also has no problem with Young Conservatives club. In fact, they welcome diversity of opinion.

“I think it’s great that students have started a conservative club at CB”, Navneet says. “This is a place to express your intellectual views, talk about what you believe in. I think that the more informed you are about issues, you’ll have a better grasp of what everything is about. We support them as a club, and we are okay with their views.

“Lots of kids have political views that they want to discuss with like-minded peers” Juliet elaborates. “In this political climate, a lot of people don’t want to listen to the opposing side, and I just think that it’s really important to instill values of respecting each other. A lot of people are afraid of offending others, but it’s good to be in the know, and we think that everyone should stand up for what they believe in.”

Despite their radically different viewpoints, the clubs both agree that it is important to generate discussion between the two sides, and have established a forum where they can do so.

“In the second semester, we’re planning to have debates with the Young Conservatives club” Nav brings up. “We agreed that it was important for us to be able to have civil discussions about different political topics without people getting offended or getting upset. We want this to be an experience where we can learn from each other, and everyone can come out knowing more about the other side.”

It is important to remember that even in these trying political times, people can still come together to have civil conversations. The fact that someone disagrees with you should not alter your opinion of them, and you should be open to hearing all sides of the debate rather than just sticking to your own set of beliefs. At the end of the day, liberals and conservatives can agree on one thing: that politics should not be a cause for a lost friendship.