Every year the students of Christian Brothers gather on an early day in September at Hughes Stadium. They fill the stands, eagerly poised to take part in the school’s most illustrious tradition: the annual Holy Bowl. Now in its 49th year, the annual bout against Jesuit is just as popular as ever. This year’s match-up […] 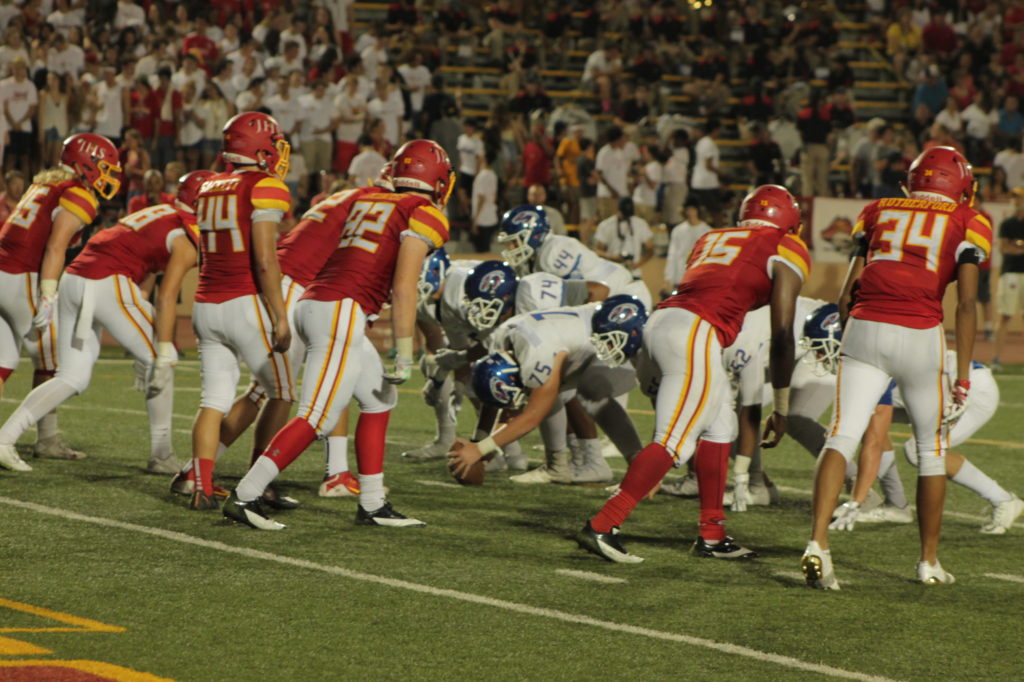 Every year the students of Christian Brothers gather on an early day in September at Hughes Stadium. They fill the stands, eagerly poised to take part in the school’s most illustrious tradition: the annual Holy Bowl.

Now in its 49th year, the annual bout against Jesuit is just as popular as ever. This year’s match-up between the two schools ended in an unfortunate defeat for the Falcons with a score of 43-14. Yet even if CB’s chances of winning seem to be fleeting, this doesn’t stop the school’s community from coming out to support the football team. The Talon spoke to students about just what Holy Bowl means to them, and why they choose to continue supporting their favorite team.

The game seems to be a constant in school life, always looming at the beginning of each school year, but many love this suspense.

“I’ve been going since before I came to CB” says Gracie Soria (’20). “I’ve attended like four”. The sophomore is especially loyal to the annual game. “Its really good for bringing a sense of school spirit, like it gets really loud in the student section and its just a lot of fun”.

Gracie feels that despite what seems like year after year of constant losses, there is no shortage of school spirit within Christian Brothers, and in fact, the Falcons’ loyalty to their team might actually be greater than that of their rivals.

“We have more school spirit than Jesuit” Soria says. “Even when we lose it doesn’t go away”.

Band member Enrique Verschoor (’19) mirrors these sentiments. Verschoor has played in the student section at Holy Bowl for the past three years, both with the orchestra and the drumline. Because of this, it is part of his and his fellow bandmates’ responsibility to make sure the spectators are focused excited for the game as it goes on.

“We have to be careful not to play while the ball is in play, so we have to watch carefully,” he says. “Although we lost, it’s definitely a great experience to socialize and have fun cheering, especially playing in the drumline where we can play along.”

Enrique attests to the significance of this sacred tradition.

“I think it’s a big part of our community, because every year everyone gets together all with a hope that we’ll win even though we’re positive we’ll lose. Also Holy Bowl is just a great opportunity for everyone to come together under a common goal, which is to win”.

Verschoor believes that despite the odds, the hope of winning is still alive and well between the students.

“There definitely is a tiny hope inside everyone that we will win. Every year we say  ‘our team is better this year’ and ‘this year we’ll win'”. However, he laments that”I just hope we win before I leave for college”.

But all of this excitement would be for nothing if it had no impact on the school’s football team. They are, after all, the ones who ultimately have to go on the field and represent the best of CB. Jakob Uebelhoer (’19) has played for the Falcons for the past three years, having spent two seasons on the JV team and this most recent year on the Varsity team. Jakob was unfortunately sidelined this Holy Bowl as a result of an injury, but he still feels very strongly about the game and provides a unifying message;/

“I think its important as almost a unifying thing, like having our school and their school, almost unified in rivalry”.

But most students want simply to take part in the community of Christian Brothers, even if they don’t pay attention to the score. Holy Bowl serves as an important break from the everyday stresses of high school life, offering students a chance to unwind with their friends and family and partake in a friendly competition with their rival school. As Uebelhoer puts it “It’s just a great thing for the school to get together, just like a competitive thing where you know like ‘hey, my friends are probably gonna be there so I might as well go too'”.