You are here: Home \ Falcon Sports \ Featured Posts \ The Few, The Proud, The Runners: My Trip To Middletown
Falcon Sports
0

The Few, The Proud, The Runners: My Trip To Middletown

I had heard the name tossed around several times over the years due to having friends who had been there before. I didn’t know much about this foreign place, only that it was a weekend-long trip the cross country team got to go on every year. It was spoken about with great enthusiasm, an event […] 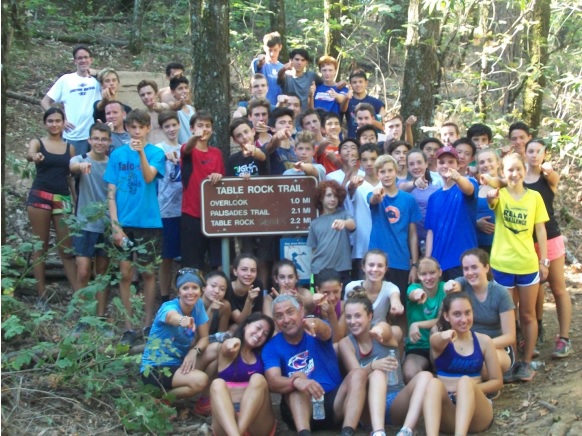 I had heard the name tossed around several times over the years due to having friends who had been there before. I didn’t know much about this foreign place, only that it was a weekend-long trip the cross country team got to go on every year. It was spoken about with great enthusiasm, an event eagerly anticipated and cherished by those who had been fortunate enough to attend. Whenever the name was brought up, I felt left out, like it was some sort of inside joke among my friends. I wondered  what exactly had made the event so memorable, whether or not it would live up to its reputation.

Entering my second year as a cross country runner, I decided to make it my mission to get to Middletown. I was still regretting my decision the previous year to attend a family event that had occurred the same weekend as their yearly excursion. I had missed an opportunity to discover what was so great about this trip, and I was determined not to let it happen again. The fact that it was my senior year was even more of an incentive to go. The requirements to make it there seemed daunting at first: a minimum of 150 miles had to be run during the summer and logged in to the website XC Stats by the first day of school. For most people, this would be an automatic-turn off, but I was up to the challenge. While it was no easy task to accomplish, I successfully pulled it off, breaking up the mileage day by day until I reached my goal.

I was thrilled — I was going to Middletown.

We dropped our bags off in Coach Delgado’s room before school and left Friday afternoon, divided into vans for the two-hour drive. Our journey had begun.

I was nervous on the way there, mostly because I didn’t know what to expect. None of the other people in my van had been to Middletown before, so it wasn’t like I could gauge them for any information. I had a bunch of questions racing through my head.  How much running would we have to do? What exactly was this place like? What did people actually do here?

The drive up was spent blasting Taylor Swift on Spotify as we did our best to stay cool in a van with broken AC. It was getting dark when we finally arrived. We had a designated sleeping area outside, not too far away from Delgado’s mother-in-law’s house where we stored food and used as a recreational center. Our evening run was cancelled because we had arrived later than expected, so we set up our tarps and sleeping bags, got changed and headed into the town to eat. We had dinner at Mount St. Helena’s, the local pizzeria and were given a few hours to spend as we wished. Once we got back, we spent time playing ping-pong before winding down for bed. Our curfew was midnight, but I went to sleep a half hour earlier just to get a solid amount of sleep in. Day One was over.

The next day began bright and early. After being woken up by music blaring on the speakers, we quickly got dressed, filled up our water bottles, and filed into our vans. I soon discovered each morning began with a run at a pre-picked location to help energize us for the day so that we were afforded lots of hill work. After stretching out, we split up into our running groups and our run began.

I can confidently say without a doubt that run was probably one of the worst runs that I have ever been on. The entire run was based on going uphill, so it required about twice the effort as a regular workout. Throw in higher elevation and my unfamiliarity with the region and our ascent became pure hell. I would be lying if I said that I didn’t do my best to walk as often as I could. The descent down the hill wasn’t nearly as taxing because of momentum, but we were already winded so it was much harder than it normally would have been.

Afterwards, we drove back to the camp and were given ample amount of free time to spend as we wished. Some of the more dedicated students spent the time doing homework, but most of it was spent having fun. Most of us swam in the pond, and after lunch, we headed over to a local school to play frisbee. Per Middletown tradition, the runners from each grade were in charge of planning and making meals for the other guests.

The seniors were in charge of making dinner, which was spaghetti. As someone who had never cooked a single meal before, this was rather nerve-racking.

Following our morning run, we showered, had breakfast, and headed into town to attend mass at one of the local churches. We came back, had a quick lunch, packed up our belongings, and helped clean the house. Delgado emphasized that it was important for us to leave it in better condition than when we had first arrived, so we worked tirelessly to clean the house. Once we were done, we posed for a picture, split up into cars based on where we lived in Sacramento, and headed back home.

“Middletown is good for the kids because it gives them exposure to things they might not normally do” says Head Coach Mr. Danny Delgado ’79. “Kids who normally don’t cook or clean get to do a lot of that when they come up here. It does a lot for those who do choose to come up here because the runs we do here are very hard and it helps prepare kids for the rest of the season. No races are as hard as the runs we do at Middletown.”

But Delgado and I agreed that what really makes Middletown special is the bond that is formed among the team while they are there.

“My favorite thing about Middletown is having kids meet each other, laughing, having fun,” Mr. Delgado elaborates. “It’s the beginning of the season so it allows some of the kids, especially the freshman and the first-time runners, to step outside of their shell more and really bond with the others. It also lets you guys see us, as coaches, in a different light. We’re together all day, in the vans, laughing and telling jokes. You guys are able to see us as people as opposed to just coaches.”

The mystery was solved. I had finally figured what made Middletown so great. It wasn’t just about getting in hill work or even improving your time. There was something that was more valuable than any of that. It was about the team as a whole, about the memories that were formed while we were there, a special bond shared among those who were able to go. It probably sounds cheesy, but I wouldn’t be saying any of this if it wasn’t true. Middletown is a special event, and I’m glad that I was able to gag along my senior year and figure out what this is all about.