Talon co-editors Sergio Castillo and Jessica Kever share their thoughts on the legacy of the Class of 2017. Jessica Kever “Top of the totem pole.” “The big men on campus.” “The Alpha Wolf.” “At the top of the heap.” These phrases have all been used by past Christian Brothers Talon writers to describe the […] 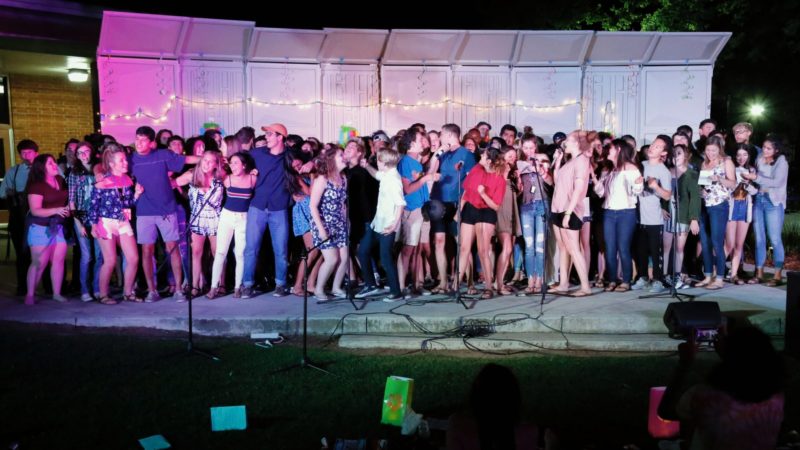 Talon co-editors Sergio Castillo and Jessica Kever share their thoughts on the legacy of the Class of 2017.

These phrases have all been used by past Christian Brothers Talon writers to describe the graduating class. But is that really all that makes seniors special? We’ve been here longer than everyone else? If that’s true, then what distinguishes seniors from Mr. Tom English?

As a freshman, I remember thinking of seniors the same way: older, more experienced, and just generally better than us measly lowerclassmen. I saw them, but I didn’t know them — so that hazy impression of “seniority,” so to speak, is all that remains of the class of 2014 to me.

But that all changed in my sophomore year. For the first time, I had a class with seniors, which was new and intimidating and oh so terrifying, but most of all, it was a milestone. That class was when I realized how special seniors were, and how special they could be.

As a sophomore girl in high school, conformity was at its peak. I remember freaking out one day when I looked around and realized that I was the only person not wearing Converse — or at least it seemed that way to me. Needless to say, by the next week, I had Converse.

Christian Brothers prides itself on having an inclusive community. I’ve found this to be partly true among the lowerclassmen; while there’s certainly no Mean Girls-esque fashion shaming, other freshmen and sophomores are less likely to spontaneously introduce themselves than CB brochures advertise.

But the seniors weren’t like that. While the sophomore class looked like a walking American Eagle ad, the seniors were sporting everything from flip-flops to tennis shoes, from fuzzy slippers to combat boots. And it was very weird to me.

The seniors looked like they didn’t care about “fitting in” or being popular, yet they were always surrounded by friends. To insecure, sophomore me, that just didn’t compute.

Well, until I met Natalie Wiseman ‘15.

We started talking in choir, the aforementioned oh-so-terrifying class I shared with a large group of seniors. I feel pathetic typing this, but I might have been the most shocked I’ve been in my entire life when I realized after a few weeks that we were kind-of-sort-of-maybe…friends. I just couldn’t fathom why such a popular, self-confident senior like her would reach out to a lowly sophomore like me.

It’s hard to pick an exact moment, but I think becoming friends with Nat was when my definition of a “senior” started to change.

Being a senior is not caring about clothes, especially after fourth quarter hits. Well, not obsessing over your clothes to the point where style is something you fault others for. If some seniors want to dress in color-coordinated, perfectly chosen outfits every day, more power to them. But being a senior is not judging your friends when they stick with pajamas after a long night.

Being a senior is finally casting off conformity — looking how you want to look, doing what you want to do, and being who you want to be without worrying about what others will think of you.

Being a senior is making a positive impact on CB. Whether it’s through leadership in school programs or simply smiling at other students in the hallways, seniors bring a special light to the community.

Being a senior is being able to make tough choices. CB is a college prep school, and almost all of us have just gone through the long process of choosing a college to attend in the fall (or the next fall).

This could quite possibly be one of the most important decisions of our lives; we have to choose where we want to spent the next four years — which often ends being where we spend a good portion of our lives — and what we want to do for a career in one fell swoop. It’s overwhelming. But being a senior is being able to handle the responsibility.

As someone who has lived in California for her whole life, moving 3,000 miles away from almost everyone I know is scary. Terrifying, actually. And while I could’ve let this fear pressure me into making a safer, more comfortable choice, I know in my heart that this is the right decision for me.

Being a senior is learning how to decide what’s best for you, on your own, without letting others influence your choices.

Being a senior is truly embodying CB’s core principle of inclusive community and trying each and every day to make Christian Brothers a better place.

Being a senior is knowing that no matter how far we all spread in the years to come, we will always have a home with our Brothers and Sisters.

And to the Class of ‘17, being a senior has meant spreading love.

The senior Class of 2017 is like a living person. Just as a person goes through life, our class has gone through many experiences together. We are bonded together, and we have tried to discover who we are and what we’re about for a while now. We’ve spent four years, which for some seems like a lifetime, here at CB and now that all is said and done, it’s time to ask ourselves: What was it all for?

Our legacy is the only thing we leave behind. Sure, all of the service hours, homework, extracurriculars, etc. are taken into account when trying to define what our legacy is. But for the most part, nobody will remember any of that stuff.

I have often heard teachers on campus say, “We don’t usually remember specific people; we mostly just remember the overall feel of the classes that go through CB.” Even I, as a current student, will always remember the class who put a cow on the second floor as a senior prank (Fun fact: this year commemorates the 20th anniversary of that magnificent horseplay — or would it be bovine-play?). And of course “The Golden Class” of 2015…need I say more?

Well to start, we are one of the most athletically gifted classes that CB has ever seen. Our football team went further in playoffs than it has in 30+ years; our women’s volleyball team won Holy Court twice, along with the section championship; and speaking of section titles, with the class of 2017 at the helm CB has won the most section titles it ever has in one year — six and counting. Our baseball team beat (crushed, dominated, demolished, etc.) Jesuit by a score of 16-4, our softball team beat Saint Francis, and our men’s volleyball team won its first league title in seventeen years and made it onto ESPN’s “SportsCenter: Top 10 Plays of the Week.”

On the field, court, turf, and track, the Class of 2017 seniors have made their presence known and have brought Brothers sports to a whole new level.

As far as academics go, our seniors were accepted to hundreds of esteemed colleges and universities around the world. Also, not just one but TWO members from the Class of 2017 will be attending Harvard in the fall…Seriously, it doesn’t get much better than that.

However, athletics and academics only scratch the surface of our legacy as a class. What has really defined us over our journey has been our resilience and empathy.

CB is known for, and is proud of, its inclusive community. A community that is rare to high school campuses — one where anyone, no matter race, gender, sexual orientation, religion, ethnicity, etc., is accepted and valued.

What the Class of 2017 has done ever since November of 2014 is become masters of compassion and cultivators of community.

The Class of 2017 lost someone very special in their sophomore year. To some he was a brother, to others a friend, but to all, he was pure light and joy. The loss of Spencer Pershall (‘17) left a gaping hole in the CB community that remains painful even now. I remember our class being in shambles, and all we really had was each other. The only ones who could relate to our specific pain were our fellow classmates, and the amount of love and compassion that we had for one another during that time was truly a sight to see.

At that point, we were no longer classmates; we were family, and we had each other’s backs. We came together, we held each other, and we loved each other. Through Spencer, our class gained a new appreciation for one another, and we began to live by the mantra “Spread Love for Spencer.” Spencer allowed us to be examples of the power of love — not only to each other, but to the entire CB community and beyond.

So, maybe this is our legacy. Maybe we will go down as the class who “put their love into action.” Or maybe we will be remembered as the kids with the biggest hearts that CB has ever seen. Regardless of what others remember the Class of 2017 as, nobody can deny that what we did here at CB was unique.

Ms. Loretta Kenney and I were talking recently and she told me, “You know, I’m really gonna miss the Class of 2017 when you guys leave…You guys were just genuinely good people. Yeah, you guys are gonna go really far.”

Indeed, this class is filled to the brim with amazing, compassionate, empathetic, and overall good people, and we have the potential to change the world with our unmatched ability to love.

So fly, Class of 2017. Fly together, fly far, and continue to spread love.