The age of digital communication continues to transform the lives of people across the world. Every new social network makes it easier to stay in contact with friends and family, to connect countries and continents, and to bring people together for a seemingly endless variety of reasons. For many people the world over, social media […] 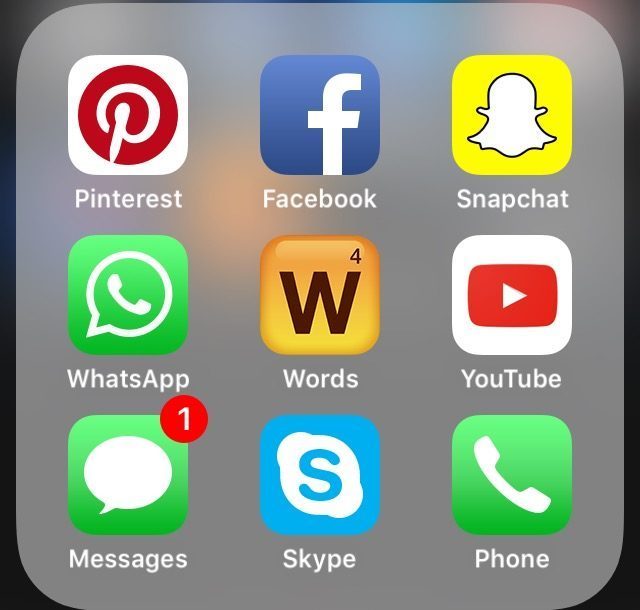 The age of digital communication continues to transform the lives of people across the world. Every new social network makes it easier to stay in contact with friends and family, to connect countries and continents, and to bring people together for a seemingly endless variety of reasons.

For many people the world over, social media has become an integral part of life. It has shaped young and old alike to depend on their mobile devices for much more than the casual text and occasional call.

Emily Shepard (‘18) is a big fan of digital communication. As an active member of around ten different networks, Emily checks her phone daily to find updates from apps ranging from Facebook to Tumblr to Pinterest.

“I think I first got on [social media] because it was a trend, but then I just kind of got addicted, which is sad,” Emily began. “It’s fun. I don’t really know why I have it. I just do.”

For Emily, discussing the topic of social media is about as commonplace as discussing what day of the week it is or which set rotation is up for tomorrow. Digital networking has become such an integral part of her life — as well as the lives of so many American teenagers — that living without it seems unimaginable.

“It’s a good pastime, even if I waste too much time on it,” the junior said casually. “There’s a lot of funny memes and posts on Twitter.”

Emily raises a good point about the duality of spending time on these apps. While many websites provide the benefit of fast entertainment, their convenient accessibility can quickly become an inconvenience if using them turns into a time-consuming addiction. 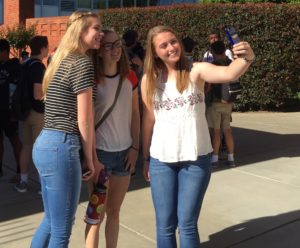 Sean Baker (‘17) agrees with Emily in regards to this issue. He even believes that these networks are specifically designed in order to keep users from closing their apps.

“People model social media in a way that you can’t not look at it all the time,” he stated knowledgeably. “It has a psychological effect on people.”

Sean admits that he often uses social media for a good laugh when he has time to spare, and all too frequently gets roped in even when he doesn’t. Yet the phenomenal drummer of Sacramento’s very own band Iscariot has an additional use for these networks.

Like countless businessmen and band members around the world, Sean enjoys the advantages that the Internet provides to those seeking to reach a broader audience. While the mellow musician tries not to rely on these connections to carry his music career, they undoubtedly help to spread the word about upcoming events.

“You can still attain a certain level of success without social media, and it’s not something l really depend on, but it’s a factor for letting my group of friends know without having to text each person individually.”

In return for all the time Sean has invested in scrolling through his phone, he reaps the reward of time saved in contacting peers about Iscariot. One single post can allow Sean to reach hundreds of fans, including countless CB students.

Twitter-users and Facebookers are certainly not hard to find across our campus, yet not every teenager feels the need to partake in the growing trend toward this public communication. Maddie Mercer (‘18) is one swimmer who swims against the tide. Despite being well-liked and highly social, Maddie has made a personal choice to avoid all social media networks.

“When social media first became popular, I wasn’t allowed to have it,” the junior explained. “Now I could, but I just don’t want to.”

Like Maddie, many kids have house rules for when they can join the online community. Some then decide to jump into the Internet as soon as they are allowed, while others feel no attraction to do so.

For Maddie, many factors play into this reluctance to post.

“One of my biggest nerves is always that something will go out or people will put something [up] that’s not true,” said the practical junior. “That’s my biggest fear because then colleges could see it.”

She then clarified her concerns.

“It’s not always [that I’d be] guilty, but even just guilty by association.”

Swimming right alongside Maddie is her fellow aquatic athlete Kristina Murphy (‘18), a highly qualified year-round swimmer and another teenager reluctant to throw herself into the media realm.

“I use Instagram, but it’s the only [account] I have,” Kristina said calmly. “If you’re always on social media, it’s really hard to do homework, and I get distracted really easily. I just don’t feel the need.”

Kristina does not avoid all online networking like Maddie, but she does limit her exposure to it. With over sixteen hours of swim practice every week, it is little wonder that she wants to avoid adding the distraction of Snapchat or Twitter.

Though she enjoys looking at others’ posts, Kristina does not have any pictures of her own and is also very selective when choosing to accept or decline follow requests.

“For my swimming, I’ve had colleges request to follow me, and I think that’s a little scary because they can see everything and it might have a little bit of an effect [on my applications].”

By having an Instagram with no pictures, the clever athlete gets the security of maintaining a clean online presence, as well as the benefit of keeping up with the lives of people she doesn’t see every day. For those she does see more often, however, the lively teen prefers a more direct method of contact.

“They’re my friends, so I would text them or [talk to them] in face-to-face conversations.”

Kristina truly appreciates the value of a good laugh with someone in person. She recognizes that online communication has its place, but that living in the moment can help to avoid many of the complications that updating statuses and creating posts can add.

Many aspiring students, like Maddie and Kristina, are concerned about how colleges perceive their applicants’ social media presence. Ms. Melissa McClellan, CB’s Director of College Counseling, clarified exactly what role a student’s online activity plays in determining his or her acceptance.

“Sometimes if it’s not a for-sure decision and it goes to a committee, for example, or if it’s down to a couple of kids and they’re trying to decide who to admit, [the administrators will] go to a couple of social websites and look to see what’s posted, [see] what [they are] talking about, look at their pictures [to see if they are] inappropriate [and if there are] illegal activities happening, stuff like that.”

Ms. McClellan has had years of experience with guiding kids to college and ensuring that thousands of CB students have earned a place in the university of their choice. She says that often times colleges aren’t even concerned with what students post, and only in certain cases do the admissions committees actually take up an active search to get a better feel for the applicants.

Further, Ms. McClellan highlighted the fact that most social networks have a privacy setting. Although she does not think it is necessary for students to abstain from their favorite sites, she recommends opting to remain private to prevent colleges from seeing anything they might question.

“For the most part, if you mark [your account] as private and only allow people you know to see it, then it’s not going to impact you,” she stated. “Don’t [avoid using] it if it’s something you enjoy having because you’re freaked out. As long as you know who’s able to view it, then you’re probably safe.”

Ms. McClellan’s advice should not come as a surprise. She has helped walk many students through the college application process, and not every high schooler has been as cautious as Maddie and Kristina.

Ms. McClellan even shared with the Talon several benefits to having a Facebook or Instagram. Contrary to the popular belief that all colleges view social media negatively, the college expert said that many will actually use the media to connect with their applicants.

“Most of what I’ve heard is that schools will have Facebook groups for students who have been admitted [so that] you can talk to other students who have been admitted. It’s a way that you can find a potential roommate; it’s a way to learn about other things going on around campus and [how] to get involved. So on that end, [having social media] can definitely be positive.”

Colleges, like many of their applicants, often use digital communication to stay in touch and to spread their messages on a broader scale. Although it’s true that having an Instagram page full of questionable pictures of yourself doing questionable things is not going to appeal to the school of your dreams, maintaining a good online image can actually help in your transition to college.

Like everything in life, social networking requires good judgment and balance. It can be a great source of entertainment and can help to keep people in touch, yet it can also become a distraction when used without caution. Whatever stance you take on the issue of social media, be mindful of what you choose to post and whom you allow to see it.