You are here: Home \ Community \ Featured Posts \ GC Who?
Community
0

2014: One CB student is the very first in the history of the school to apply. 2015: The same as the previous year. 2016: A record TWO students applied. 2017: 12 students applied to Grand Canyon University in Phoenix, Arizona, and more than half of them have committed to attend this coming fall. These 12 […] 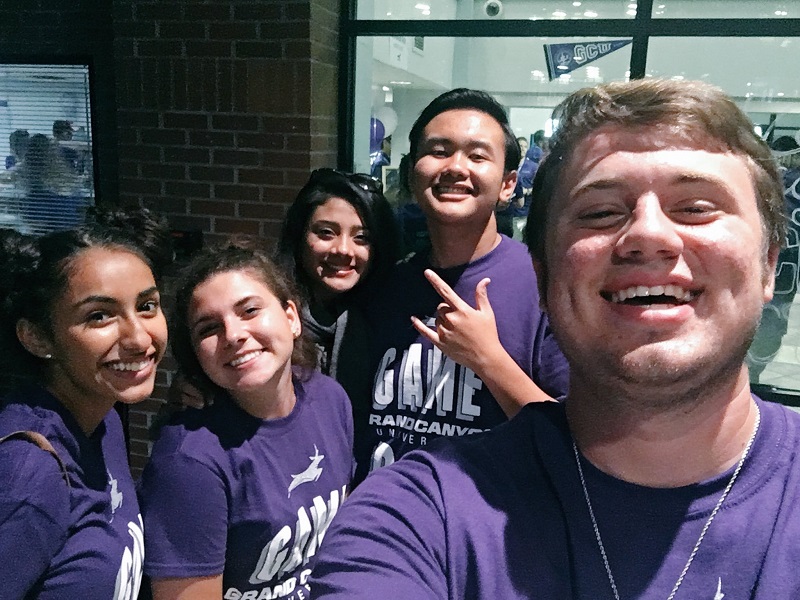 2014: One CB student is the very first in the history of the school to apply.

2017: 12 students applied to Grand Canyon University in Phoenix, Arizona, and more than half of them have committed to attend this coming fall. These 12 college-bound Falcons have all received the same question that I asked before writing this article: ”What the heck is GCU?”

In short, Grand Canyon University is a very small, for-profit, private Christian university. It has a size of about 20,000 students on campus, along with 61,000 students utilizing GCU’s online education program. This coming fall, it will add at least eight Falcons to its ranks despite never having a CB student attend the university before.

The Talon spoke with CB’s Director of College Counseling Ms. Melissa McClellan about this sudden spike in interest towards GCU amongst CB students.

“A couple of years ago, because it is a Christian school, [GCU] came to our campus with an offer of a consortium,” she explained, “If we joined our students would automatically get a $5,000 scholarship, kind of like the Lasallian scholarship that students would get if they attended Saint Mary’s College. Since joining the consortium, a couple of students have been interested here and there, but we have never seen an interest in GCU like we have this year.”

Many seniors were just as surprised as Ms. McClellan when we heard that a decent sized group of our friends were applying to and would attend GCU in the fall. Not only had we never heard of the college, we didn’t know why those people would want to attend such a small, lesser known school in the first place.

After speaking with some of the students interested in GCU, it became very clear why they decided on the school — it’s cost efficient, modern, and a rising star in the world of nursing.

I spoke with senior and GCU commit Justin Dacanay (‘17) about how he came to discover his now future school.

Many students have come to love GCU through their “Discover GCU” program where they fly students out to the campus for free and try to get them to feel what it is like on campus.

“I heard about it through [senior class counselor] JRP,” Justin stated. “He told me that GCU would fly me there and back through a program called Discover GCU and it would all be paid for and they’d buy me food, and that was super fun. To be able to do the trip I had to apply there, and the app only took about twenty minutes, so I figured why not. I just fell in love with the school.”

Lexi MacDonald (‘17) did the same trip and also fell in love with GCU and will now attend the school this coming fall.

“I got to stay overnight on campus and get a tour and meet students. It was really fun and it reminded me a lot of CB because it’s not in the best part of town, but it has a really great community outreach program.”

Along with the free trip, another thing that attracted CB students was GCU’s affordability. Costing only about $18,000 a year in tuition and fees, GCU is one of the more affordable four year universities in the country. Alex Cerezo (‘17) summed it up best.

“I really like the affordability,” Justin added. “Because of scholarships and my grades and other factors, going to GCU will be cheaper than coming to CB…I just love that. Some people think that just because it’s cheap that the education isn’t that good, and that is just not true. I’m going there for nursing and they have a really strong program so that’s my favorite part.”

It seems that many of the seniors interested in GCU are also so attracted to the school because of the non-impacted nursing college fitted with brand new, state of the art facilities and equipment.

“They have a nursing program that’s not impacted which is HUGE,” stated Ms. McClellan, “especially for our students who want to do that because there are very few nursing programs in the country that aren’t impacted.”

Lexi, Alex, and Justin are all entering GCU as nursing majors and all expressed their excitement for how modern and up to date the nursing program is.

“They have a whole floor or two that is just a simulation hospital,” stated Alex. “That is so cool and modern and not many schools can offer something like that, especially for such a good price.”

The reason GCU can afford to provide all of these brand new facilities is because it gets so much money from its online business.

“GCU is a for profit university,” stated Ms. McClellan. “And where they get most of their money is from their online business. So they take the money from their online courses and put it back into their undergraduate program on campus. That’s why they have new dorms, new facilities, nursing labs, a new gym, and an overall very modern campus.”

With a beautiful campus, a strong non-impacted nursing program, and a cheap cost, it’s a shame that CB students hadn’t come on to GCU any sooner. This year’s future Antelopes, though being the first from CB to attend GCU, are sure to leave their mark on the university and create memories to last a lifetime.