You are here: Home \ Community \ Featured Posts \ The Perks & Probs Of Promposals
Community
0

The Perks & Probs Of Promposals

Prom can be quite a lot on your plate! Looking for dresses and tuxes, a date… This year’s Prom takes place on April 22. For many upper division students it is an exciting time full of fancy outfits, lots of planning, and weeks of looking forward to that one special night. For some […] 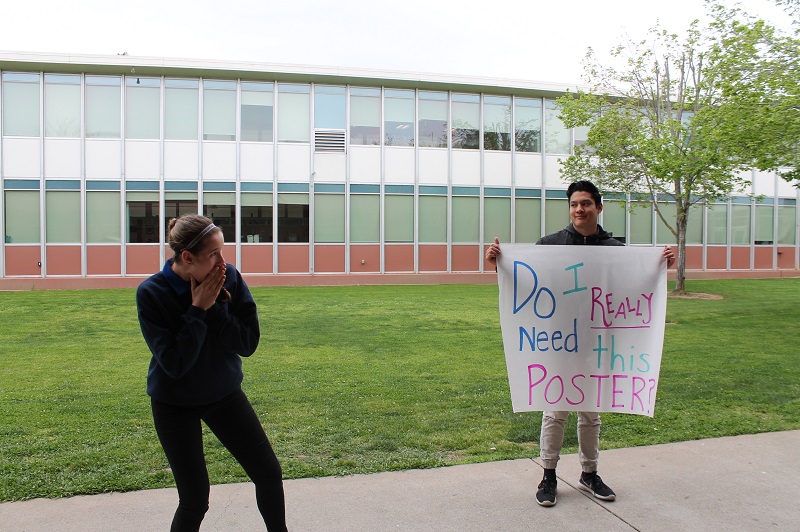 Prom can be quite a lot on your plate! Looking for dresses and tuxes, a date…

This year’s Prom takes place on April 22. For many upper division students it is an exciting time full of fancy outfits, lots of planning, and weeks of looking forward to that one special night.

For some people, however, the season before a big school dance such as Prom or Homecoming is extraordinarily stressful. Dance proposals are often a component of the stress for many of these students.

As the number of promposals has grown, many people here at CB have formed strong opinions on these “big asks”, which are supposed to be fun but can quickly get out of hand.

Cassidy McCallum (‘18) is a big fan of promposals. She has been asked to Homecoming with posters before and loves seeing her friends and fellow Falcons get asked as well.

“I think it takes a lot of courage and you know that the guy put a lot of thought into asking because you wouldn’t do all that if you didn’t want you to go with them,” Cassidy began. “And they’re really cute.”

Cassidy emphasized that the amount of effort it takes for one student to ask another publicly, or even privately, with an elaborate poster can be very uplifting for the person getting asked. She said that the proposal becomes even more memorable if it is made to fit the recipient specifically.

“When someone does something that relates to the person they’re asking you can tell that they really really care about it,” she said happily.

While Cassidy has a very positive view of the interesting asks, her fellow junior, Sabrina Hirsch (‘18), takes a different stance on the idea of these proposals.

“I think promposals are completely ridiculous, specifically because you have  this guy and he does this big grandiose proposal and then the girl—everyone’s looking at her—pity yes. It’s a way of manipulation.”

Sabrina has seen many promposals take place, and she has even been asked in a grand way herself. Although some of these invitations turned out well, she has also watched a number of them go downhill when there is a miscommunication involved in the process.

“The girls get whatever the guy brings them and then they say no to the guy the next week because they didn’t want to do it in front of people,” she claims.

Sabrina suggests that a better way to ask people is through good-old verbal communication, which can be just as effective for securing a date and also avoids the awkward and embarrassing situation that can result from asking people in public. Sabrina is by nature an outspoken person, and she believes that it actually takes more courage to ask someone without all the fuss.

“People are so weak if they can’t just say what they want.”

Cassidy and Sabrina have both had pleasant experiences with being asked to school dances, but they still feel very differently about the extravagance of modern promposals. Guys also take a stance on the issue and how their actions measure up to the standards people now hold for them.

“Not everyone should be pressured into doing a huge promposal, but if you want to it’s cool, I have no problem with that,” he said casually. “They’re fun.”

Jacob doesn’t feel as strongly about the issue as either of the girls does. He sees both sides of the situation because he knows the amount of work that goes into asking a girl to the dance and also the reward of her reaction.

Many teachers also have opinions on how their students now approach Prom. Mrs. Carla Albright ‘04 has seen a change in the way people prepare for the dance since she attended CB. She sees the social media craze that has erupted around the internet and how people have started to care more about how they are asking than who they are are asking.

“I think it makes it more of a social media craze than a from the heart,” the moderate social media user started.  “And, it costs a lot of money… It should be a gesture from your heart, not from your wallet.”

Mrs. Albright especially dislikes how the sweet and simple invitations from friends often get completely overlooked.

“It’s like if you just simply ask, it’s not locked and secured, if you don’t do the proposal part of it you can back out at any second.”

The caring math teacher has heard too many stories about her guy students who have had girls accept their simple invitation and then accept a bigger proposal from another guy. She has also seen the more loyal girls accept the first big proposal only because they didn’t want to say no to the material thingst, even if they had wanted to go with someone else.

“It’s sad when people go spend a ton of money and since there’s such a big proposal the girl doesn’t get to make a genuine decision.”

The famed teacher applied her mathematical mind to solving the problem of promposals gone wrong.

“The ironic thing about the whole situation is that girls want to be asked and guys would ask more without proposals. Hmm, I kind of see a connection here.”

Although not all invitations to dances are grand and over-the-top, and not all over-the-top promposals flop, communication is key to success in any plans you may make. While the extravagance of promposals can be fun and inspirational, the use of simple words should not be discounted.

Posters and roses and chocolates are nice, but a dance invitation is not about price! So don’t get lost in how you invite, but remember to make Prom one special night.