You are here: Home \ Community \ Featured Posts \ Promometer: Where Do You Fall On The Spectrum?
Community
0

Promometer: Where Do You Fall On The Spectrum?

When it comes to prom, people tend to freak out. Whether it’s deciding what to wear or where to take pictures, everyone seems to stress too much. The Talon spoke with two prom goers at opposite ends of the prom stress spectrum to get some insight on all the hype. Madeleine Molitor (’18) fits the […] 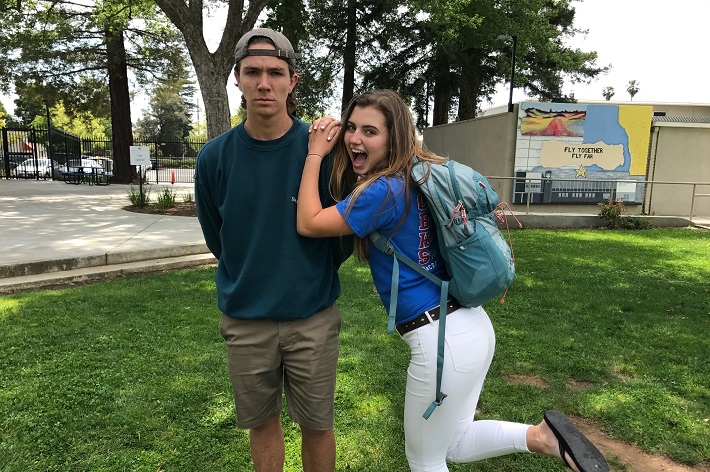 When it comes to prom, people tend to freak out. Whether it’s deciding what to wear or where to take pictures, everyone seems to stress too much. The Talon spoke with two prom goers at opposite ends of the prom stress spectrum to get some insight on all the hype.

Madeleine Molitor (’18) fits the stereotype for girls when it comes to prom: squealy, loud, and over-prepared.

“I’ve been preparing for prom since like the beginning of the year,” explained the over-eager junior.

Johnny Pressey (’18) is the exact opposite of Madeleine: laid back, unbothered, and under-prepared.

“I’m more concerned about the meal before, gotta make sure I get something good to eat,” he explained smiling as he envisioned the perfect meal at the Hyatt.

This perfectly captures his nonchalant personality, especially having to do with prom. Madeleine on the other hand has much greater concerns.

“Honestly like, I’m a little nervous I might like trip or something walking into prom. I was also pretty nervous about my date, but luckily I just got one,” she said with a look of worry. Just the thought of embarrassing herself at prom causes her hands to get clammy.

Johnny’s annoyance with Madeleine’s worries is clear. He just doesn’t understand all the stress and hype for prom.

“I think girls take prom too seriously, it doesn’t have much importance,” he explained. “They tend to treat it like it’s life or death, when it’s not really important at all.”

I mean Johnny’s right — prom isn’t life or death. In reality, only a few things are necessary for an amazing night: going to prom, being happy with your date situation, and having a positive attitude.

Speaking of prom dates, Madeleine and Johnny began to argue about the subject. I was thoroughly entertained.

“If you’re not gonna put in all your effort into asking a girl to prom and like, being the best date for her and making it the best night of her life, then don’t go,” claimed Madeline while glaring at Johnny.

“Why does it just have to be about the girl, why don’t the guys deserve the night of their lives? It’s always all about you Madeleine,” Johnny shot back.

“Just make sure you ask someone that actually is okay with you asking them,” she said.

“Is that why you don’t have a date?” Said Johnny as he ended with his own air horn noises.

Madeleine did make an important point. It’s crucial to communicate with the person you’re asking to make sure nobody’s feelings get hurt. For example, if you don’t want to be asked publicly, you should express that to whoever is planning on asking you. And if you plan to ask someone you’re not friends with, talk to their friends to make sure they don’t already have a date or plan to go alone.

If you get asked by someone you prefer not to go with, a polite decline is always the right choice. It’s important that you’re excited about your date, and going with someone out of pity can cause more hard feelings than toughing it out.

“I think it’s fine to keep it simple when it comes to asking people to prom, a sign or going out to lunch would be good,” explained Johnny. Sometimes keeping it simple is the sweetest way. Maybe add in a few inside jokes or a poster with the theme of their favorite TV show.

“I don’t think guys care enough about prom. Like asking a week before, these girls have like been waiting their whole lives for prom, like are you serious.”

Prom dates are not important when it comes to prom. It doesn’t matter who asks you or if your crush is going with someone else, just be happy with your situation or go with your friends.

Although Madeleine may be a little over the top and Johnny slightly under-prepared, they will both end up having an amazing time with their dates. Prom is meant to be a time to make amazing memories with your friends.