It’s the fourth quarter of the annual Holy Bowl, and CB is losing…again. You’re exhausted, and your face paint is dripping off from the ungodly amount of sweat produced from being packed into the stands like sardines. And to top it off, CB is getting creamed. Your small amount of hope of taking home a victory […]

It’s the fourth quarter of the annual Holy Bowl, and CB is losing…again. You’re exhausted, and your face paint is dripping off from the ungodly amount of sweat produced from being packed into the stands like sardines. And to top it off, CB is getting creamed. Your small amount of hope of taking home a victory is crushed, and everyone’s spirits are low.

But then you hear the quiet letters being whispered, getting louder and louder:

No one can keep our spirits up like the beloved rally chairs, but can they keep their spirits just as high when it comes to other student council activities? This is the question that the co-Student Activities Director Mrs. Annie Vanenburg has been pondering in her eight years of experience.

The job of the rally chairs involves heading the rallies, organizing school spirit along with school spirit days, and contributing to student council with dances, The Fun Run, and anything else student council is involved including 7 AM class on Tuesdays and a 8 AM meeting every Thursday. Yup, no late start…for anyone that can be a deal breaker.

Current rally chairs Devon Paulding (’17) and Ryan Murphy (’17) ran for this position to boost school spirit and have fun during their senior year.

“We really wanted to just have a good time and try to make the best out of our senior year and we thought being a rally chair can help us do so,” the dynamic duo said.

When it comes to planning rallies and thinking of cheers, Devon and Ryan are completely dedicated, but the early mornings and meetings were not so appealing to these spirited Falcons. Devon are Ryan are not the only rally chairs to feel that way as some of those who previously held this position to have the same sentiment.

“Every once in a while, we get a couple students who only want to plan rallies,” said Mrs. Vanenburg. Though most rally chairs like the student council aspect, there have been some in the past who have felt the same way,”

This was a sign to Mrs. Vanenburg as she decided to take action and, “try a different way and not have them do student council, so it’s not as big of a responsibility, but they won’t get class credit for it.”

Instead of having rally chairs run for ASB, those who wish to be a Falcon cheer leader will have to interview with the newly elected ASB council, who will select those who bleed the most blue. From those selected, the two most enthusiastic and outgoing will be honored with the title of a rally chair.

Mrs. Vanenburg took this proposition to fellow Student Activities Director Mrs. Roseanne Holmes, along with co-Dean of Students Mrs. Cecilia Powers, and then voted on the proposal in a student council meeting. It was a universal decision across the board to rid the rally chairs from student council and see if it is successful. 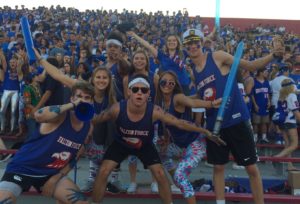 Falcon Force poses in their red and blue at Holy Bowl

Junior Council member and future ASB President Zachary Lau (’18) believes that this will be smart move and boost school spirit, as those interested in Falcon Force or being a rally chair must put effort into getting their position. He also felt like the early morning student council meetings discouraged those who had the desire to show off their CB pride.

“A lot of people I know wanted to be rally chairs, but when I told them about the 7 AM meetings they immediately changed their minds,” the passionate council member says.

Zach has been disappointed with the school spirit this year and is hopeful for a change. When he went to the girls basketball NorCal playoff game here at CB, he was shocked to walk into an empty gym with no students there to cheer on the very successful team.

He believes that taking the rally chairs out of student council will be beneficial. He feels like there should be a good balance between rally chairs involvement in the activities, but also in student council meetings so that they can keep the council informed on the rallies and fun events.

Lessening their involvement in student council will allow them to fully immerse themselves solely in their rally chair duties and  give them more time to be fully dedicated to boosting school spirit and planning fun activities.

“If they go to all the games and just do rallies they will be more pumped as they don’t have any of the bigger responsibility of student council,” Mrs. Vanenburg proclaims.

Devon and Ryan are confident and hopeful that removing rally chairs will only have a positive impact. They know firsthand how overwhelming nature of this position, and believe that this new system will give the rally chairs more time to focus on their job and make the rallies even better.