Diving Into The New Season

Spring. A new beginning — a time for change and exciting new opportunities. Christian Brothers offers the best sport for this refreshing season — diving. The Talon decided to dive into the unknown sport that most students are unaware of. Dive is a small sport, which gives the athletes more of an individualized learning experience. It allows for […] 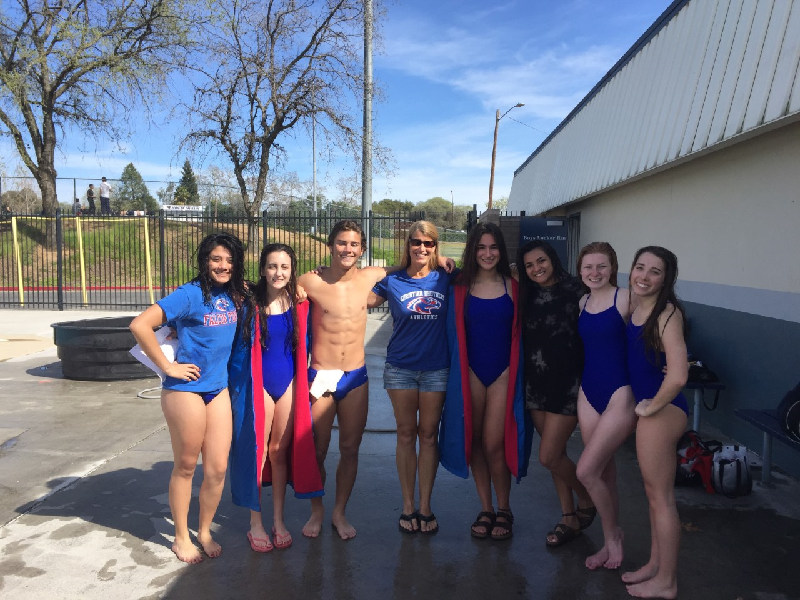 Spring. A new beginning — a time for change and exciting new opportunities. Christian Brothers offers the best sport for this refreshing season — diving. The Talon decided to dive into the unknown sport that most students are unaware of.

It is not as complicated as most people imagine it to be — athletes learn basic jumps first, which is literally just knowing how jump off frontwards and backwards, but with good form. Good form means a tight core to help the body go against gravity and maintaining a tension free body to avoid spraining or hurting muscles.

Diving is a sport where every athlete learns and advances together, and if someone falls behind, it is easy to catch up and adapt. Failure is inevitable and not every jump will be consistent with accuracy and precision. Accepting this will help with the learning process. Having a supportive, happy and healthy community makes shaking off bad dives and getting back on the board that much easier.

Diving seems like an intimidating sport but it is actually relaxing and therapeutic to athletes.

“I have a weird disorder where I pass out from doing a lot of physical activity- so the typical high school sports are not practical for me,” first year diver Libby Sparks (’17) says. 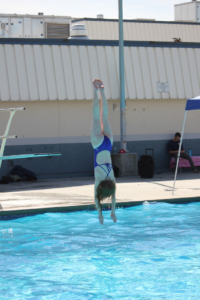 Diving sparked her interest because of her history of doing gymnastics, and even though she had never done a sport during her high school career, she still wanted to go out of her comfort zone and make senior year count.

She said how nerve wracking learning new dives is and going into it with no experience makes learning it that much scarier, but time and patience has allowed for her to get over her fear. Another concern she had going into Dive was her fear of heights, but she says, “it hasn’t been much of a problem because it’s only ten feet for the highest dive”.

She also went on to say that she enjoys dive because it is not too much of a challenging sport and how it brings out the best in athletes.

“I was pleasantly surprised by how much I have been able to accomplish in such a short amount of time,” she said.

Another benefit of joining dive are the swimsuits.

“They are really cute — they’re definitely a plus,” she said excitedly.

Libby says that her main goal for this season is getting all eleven dives down for the meets in order to get decent scores and possibly being able to execute them seamlessly. Throughout this experience, she hopes to gain more confidence.

“I think [dive] is not really a sport you join to get in shape — although it offers physical benefits, I look at it as having the confidence to try something new.”

Libby recommends students at CB to join dive because it’s different and encourages students to become more independent and social. It’s a great sport to join if a student is bored with traditional sports and would like to challenge themselves by stepping outside of their comfort zone.

“The people there are so awesome and [Coach] Dede is a really supportive coach with not just CB but with the other kids from different schools who practice and train with us,” Libby said with a laugh. “Because of that, you have the opportunity to meet new people and bond over belly flops, gnarly bruises and a multitude of mosquito bites.” 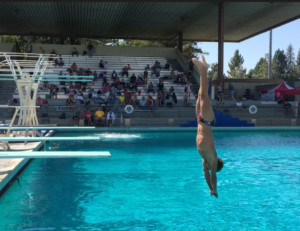 Experienced diver Owen Hunt (’18) joined the diving team freshman year and made it fifth in the JV sections that year. His sophomore year he was injured, which led him to do a summer program with Coach Dede and an invitation to the Junior Olympic team, which is where he is also practicing today.

“Coming from a wrestling background, where it’s just hard discipline, getting beat up all the time and then going to something where its more technique and you can really mellow out and focus on what your doing makes it seem like a lot easier of a sport,” Owen says. “But it has its own difficulties in its own way.”

Challenges include smaller techniques on how to dive properly, timing, twisting, getting over the fear of hitting the board, and hitting the water perfectly to avoid splashing and rolling inverse.

“Now my biggest fear is being able to still push myself and not fail,” he added.

The basic move to get every dive correct is the “Hurdle”, which is all about timing; it is the most technical piece that can make or break any dive. Owen even admits that he still struggles to get that move down perfectly.

He says that the hardest part is getting the feeling of momentum and body positioning, then getting past the “yips” otherwise known as mental blocks. Diving is very much a mental strength sport because it’s all in the athletes head. If an athlete allows for mental blocks, they will never be able to overcome whatever fear they may have and will never be able to even execute their dive.

Despite these occasional mental blocks, Owen describes dive as a sport that is rhythmic, more “zen”. Which is achievable once the athlete has surpassed all obstacles.

Owen believes that what makes a good diver is patience and pain tolerance, because in that patience there is going to be a long period of hitting the water, and that is where the pain tolerance kicks in. What matters is the persistence and determination to keep going.

“Most divers get discouraged, but it’s crucial to stick with it and I promise that you’ll start to notice and see your improvements,” Owen explained.

He recommends students to join dive and to not get discouraged by the distance because practices are far.

“Having to go to Rio Linda for practice is far, not going to lie,” he admitted. “It’s eating my pocket money away, but its worth it, and if there’s a will, there’s a way.”

Coach Dede is very excited for the new season and loves to see her athletes try new dives. Her goal this year is to hopefully have her new divers nail all eleven dives in order to perform in league meets. She is excited that this year she has more students participating and encourages more students to join.