Leaving Their Signature On Falcon Athletics

Countless hours of dedication. Practice, after practice, after practice. Our CB athletes have put in insane amounts of work, and juggling school and the grueling hours of practice can take its toll on most people. But not for our committed Falcons. Our Falcon Pride was recently boosted even more after a few stud […] 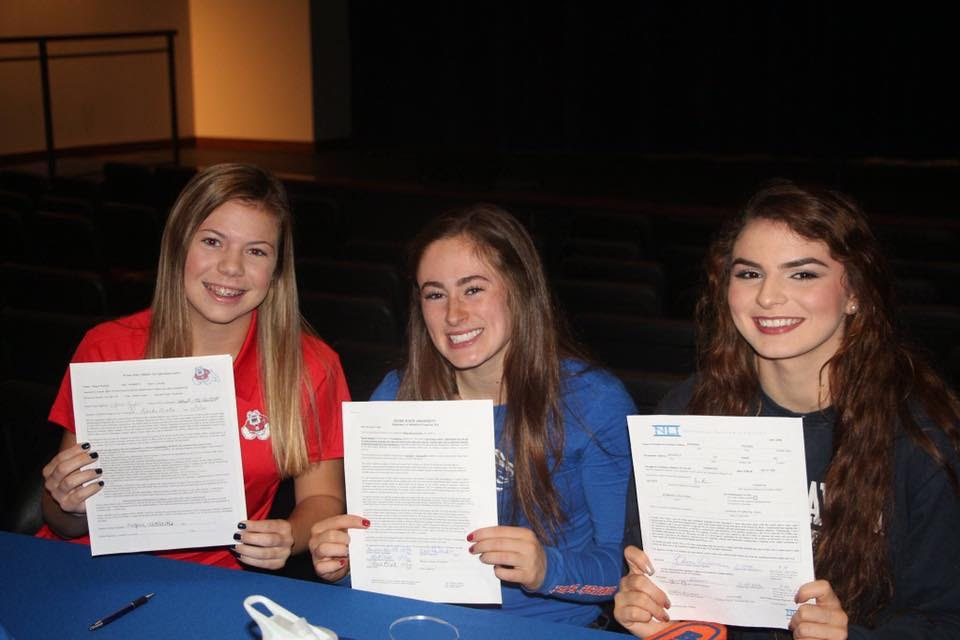 Our Falcon Pride was recently boosted even more after a few stud student athletes committed to their college of choice. Our CB Falcons already have grass stains and war wounds to show for their immense effort and complete dedication. And now they have a college scholarship to show for it.

Whether it’s sports practices, theatre auditions, or club meetings, we all know that balancing extracurriculars and school is tough. But our student athletes have figured out the secret and have been noticed by multiple schools across the country.

Megan Walaitis (’17), Rachel Obmann (’17), and Paloma Bowman (’17) all officially signed last semester for lacrosse, gymnastics, and volleyball respectively. The Talon talked to two of the commits, Megan and Rachel, to talk about the process they went through to get where they are today.

“I’ve been playing lacrosse since I was in about 1st or 2nd grade. I’m super excited to play lacrosse at the Division I level at Fresno State,” Megan explained, beaming from ear to ear.

As Megan talked more and more about her school, she always kept a smile on her face and couldn’t help from getting a little giddy each time she mentioned her teammates and coaches.

“There are 11 total girls in my class that I’ve met all of them during camps and clinics. They are all so fun and adventurous, so I can’t wait for college with them!”

Megan wasn’t the only one with a huge smile on her face on signing day. After dedicating almost all of her time and energy to gymnastics, Rachel also has quite a reason to celebrate.

“This will be my eleventh year of gymnastics,” Rachel said, shaking her head in disbelief.

Rachel signed at Boise State, which is yet another Division I school. But her decision was no easy task.

“I had a walk-on offer from Ohio State, and I had full-ride offers from Sac State, UC Davis, Kentucky, and Missouri. I already wanted to choose Boise, but they didn’t offer me anything until they found out that other schools were interested. They wanted to wait it out to see how far I would go for them. And then once I said I would have to start looking somewhere else, they offered, and I just honestly know in my heart that this is the place I need to be.”

Megan and Rachel were both very expressive about how excited they were about their commitment to their schools and their mixed emotions when it came to signing day.

“Signing day was one of my favorite days! I have been looking forward to that day ever since I committed sophomore year,” Megan said with her classic grin. “It’s been two years so it was a relief to finally sign, but I have been excited for a long time to finally be an official Bulldog!”

Rachel, on the other hand, had a little bit of different perspective on their signing day.

“I was honestly terrified. I thought, ‘Oh my gosh! I’m basically signing away the next four years of my life. I’m going to go be by myself.’ I was scared because I was feeling like I’m putting my life and education in the hands of someone else,” she describes. “And also I was a little afraid that I was going to sign my name wrong.”

Rachel brought up a point that not many students think about as they start to embark on their athletic careers. After all of the excitement of recruiting wears off, some may realize, much like Rachel did, that their sport has now become a job. Being a college commit doesn’t just mean bragging rights and money that can either help pay for your college or completely cover the costs, but it means that you are committed to devote all of your time and energy into your sport.

However, CB’s latest batch of committed athletes are just that: committed. They’ve proved their dedication to their sport day in and day out for years. Now that they’ve finally caught hold of their college dreams, they won’t let them go without a fight.