(photo courtesy of Lori Shelley) As a few of you may know, we recently got a new president. The election of Donald J. Trump has undeniably been one of the most divisive events in modern history and has already garnered a great deal of opposition. The recent Women’s March on Washington was a massive demonstration […] 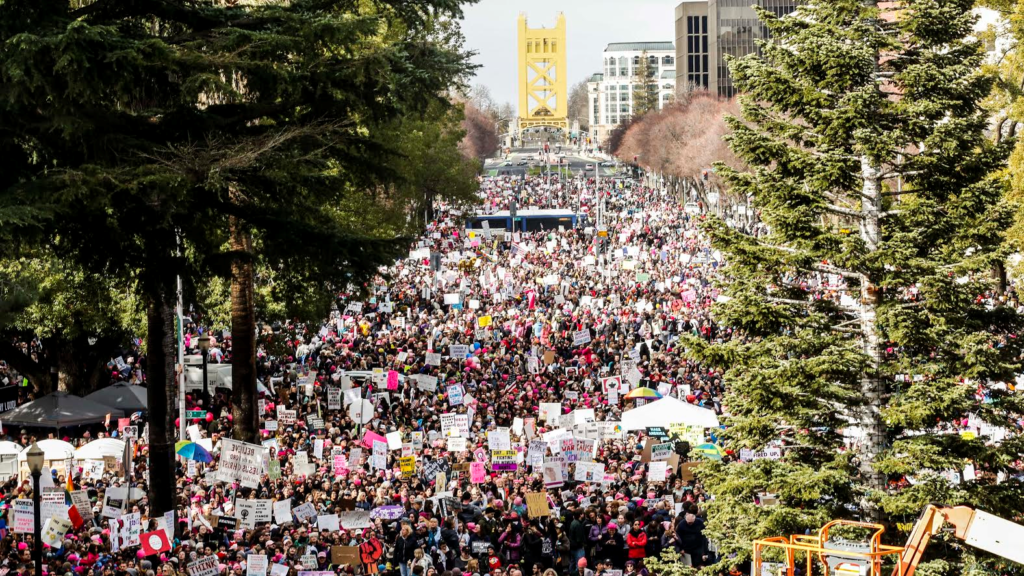 As a few of you may know, we recently got a new president.

The election of Donald J. Trump has undeniably been one of the most divisive events in modern history and has already garnered a great deal of opposition. The recent Women’s March on Washington was a massive demonstration held in Washington D.C. the day after the Inauguration, accompanied by 673 Sister Marches spanning all seven continents — including a march in our very own Sacramento.

Of course, public opposition has always risen up against unpopular political policies. In this century alone, the anti-war sentiment sparked thousands of protests across the globe.

“I did [a protest] as a very small child,” shared Maile Shelley (’17). “There was one against [the Iraq] war. Our mom had us in our triplet stroller, and she just rode us out there. We had little signs.”

“I don’t really usually think of it as ‘protesting,’” comments Mrs. Maureen Wanket, “but as marching for something…The last real protest I was involved in was in early 2003. There was an anti-war march in San Francisco that my family and I participated in — but again, I thought of that as a march for peace.”

However, the election of Donald Trump has quickly staked its claim as one of the most protested events in history. The Iraq War protests on February 15, 2003 are credited by researchers from the University of Minnesota as the largest recorded protest event at around six to eleven million demonstrators worldwide over the weekend; the global Women’s March of January 21, 2017 had five million demonstrators in a single day. 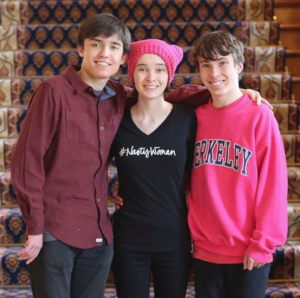 From left to right, Cal, Maile, and Jared showing their support

The march was organized to oppose the Trump administration on the president’s first day in the White House. Women’s rights were chosen as the focal point because of Trump’s many derogatory remarks throughout his campaign. As he ran against the first female candidate in history, he insulted Hillary Clinton, female reporters, and for some, the sanctity of the presidential office in general.

One comment in particular stuck with many women — his labeling of Clinton as a “nasty woman” during the final presidential debate. The phrase instantly became a message of female empowerment and a call for solidarity across the globe, and many of the marchers proudly sported “Nasty Woman” t-shirts.

“I decided to wear a ‘#NastyWoman’ shirt because I was disgusted with what Trump has said,” Maile explained. “I wanted to be able to show my support for and stand with the women that Trump has been degrading.”

The shirts have become part of the unofficial uniform of the opposition, along with knitted pink hats and very creative signs.

“Everyone was wearing their pink hats,” Eden Kolb (’17) recalled fondly. “Me and my mom made some for my family, so that was fun.”

“There were a lot of people,” remembered Cal Shelley (’17). “The whole main street was packed. That was a cool thing to see because our parents have been working [at the Capitol] for 40 years, and [my dad] said that there hasn’t been that big of a protest in 20 years.”

With such a large protest during such a politically charged time, it easily could’ve gotten out of hand. The Women’s March’s official website claims to “work peacefully,” but was that piece of their philosophy actually upheld?

“I was prepared for pepper spray,” chuckled Mrs. Wanket. “I had bandanas and water, [and] I had taught my kid what to do in the event of some kind of ruckus.”

“But it was so peaceful — people running up and hugging cops, a lot of children.”

“Most times at protests or rallies or stuff like that, people get kind of nervous because of the big crowd,” observed Mary Claire Hancock (’17), who participated in a march in Seattle. “It was weird because [this march] just felt like so much love and acceptance…Everyone was just really, really nice to everyone else…It was a really great experience.”

“I was expecting there might be some trouble along the way, but it was so peaceful,” agreed Mr. Kirk Purdy, who accompanied his daughter McKenna Purdy (’20) on the march. “It just seemed so positive, and people were so supportive.”

“Walking up to the Capitol with all those people and all the signs and all of that energy was so cool!” describes Rose Brownridge (’17) excitedly. “It was, like, an experience.”

“The protesting was really good,” recalled Jared Shelley (’17). “Everybody was all hyped, there was a lot of energy in the air, and everybody was having a good time. There was music playing…It was great.”

“It was an insanely cool experience,” reflected Joy Wilcox (’17), “because it was all of these like-minded people coming together, and it was so positive — it was such a positive, friendly environment. It was so welcoming…The whole theme was just ‘Let’s love each other,’ you know, spread love.”

“It was overwhelmingly positive,” agreed Ms. Heather Christianson ’01. “There were a lot of people [of] all ages — everyone from people there with their little kids to some very, very pregnant moms, all the way up to women in their 80s and 90s, some people in wheelchairs…My mother and I were commenting on how many men showed up to a women’s march, which we were really happy about.”

In fact, more than a few of those men were from Christian Brothers. The Talon got their opinions on why the march was important for both genders to attend.

“I thought that [Trump’s] comments against women were really…inconsiderate, and I think that he was really sexist by saying all that,” Jared asserted firmly. “Women’s rights are human rights, and I think that everybody deserves to not be treated like they’re less than anybody else.”

“I think a lot of people thought that this was an anti-Trump rally,” commented Mr. Purdy, “but it was primarily, ‘Hey, women should have equal rights like everybody else’…As a child who grew up in 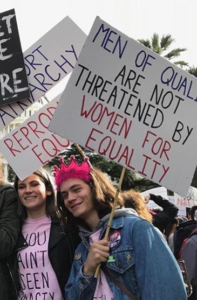 the ‘60s and watched all those marches…it was kind of cool to finally actually attend something like that and see what it was like.”

“I felt like it was important to participate in something that brought a lot of people together in a time of political disruption,” added Alex Tagudin (’17).

Alex is pictured to the left proudly displaying a sign that reads, ‘Men of quality are not threatened by women for equality.’ Other slogans included ‘Love trumps hate,’ ‘The future is female,’ ‘This is so big, even introverts are here,’ and the ever-popular ‘Girls just wanna have FUN-damental human rights.’

The Lady Falcons who participated in the Women’s March also had varying reasons driving them.

“I believe that everyone should be treated equally,” begins Eden. “That isn’t really happening in America right now…Women still get paid less than men for the same jobs, and reproductive rights are being infringed upon. It’s just something that I’m very passionate about.”

“This is a once in a lifetime thing,” Rose declared. “It’s happening everywhere. This is something I can do now about the political mumbo jumbo that’s going on.”

“Personally, I wanted to do it because I’m a very politically motivated person, and there’s a lot going on right now that I don’t really agree with,” explained Jamie Phillips (’17). “I didn’t want to be one of those people who just posts about it online; I wanted to feel like I was actually making a change and standing up for what I believe in.”

“I know it was a protest, but when I’m doing these things, I’m always thinking of it as a positive,” shares Mrs. Wanket. “I thought of it as marching for the rights of women and minorities and children and education — and for my community, just as a way for us all to get out and feel less afraid. It was for courage, for my country.”

“Everyone has different issues and concerns that are at the forefront of their minds,” expresses Ms. Christianson. “But we’re going through a difficult period in our nation’s history, and I think more people feel a greater need to be more proactive in the political discourse…to say, ‘I also have concerns. I’m here with you. Let’s do something positive to move our country forward.’”

All of the CB students and teachers who demonstrated had a wonderful experience at the Women’s March and intend to participate in future events. A few of the advocates shared some final words of wisdom.

“There’s so much happening in our society that seems like it’s maybe starting to regress to some older beliefs and moving away from some of the acceptance and love and equality that we’ve been working toward,” reflects Joy. “For people who don’t agree with this march…think about what’s really being said here…[The goal of this movement is] to just preach that level of acceptance and not let ourselves get swept away in some of the hate that’s becoming more popular.” 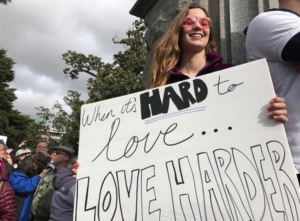 “It’s not enough to demonstrate; you also must work on behalf of peace,” encourages Mrs. Wanket. “Part of why I love working at Christian Brothers is that we do Venaver, we do Wellspring — and not just that, but we take excellent care of each other…It’s really important to me that my students feel that, wherever they land on the political spectrum, I love them.”

“Whether they’re marches or not, I feel much more motivated to be active for the causes and the things that I believe in,” Ms. Christianson concludes. “I grew up in an era where it felt very comfortable to just sit back and let things happen, but I think it’s becoming clear that people really need to get engaged.”

“I think it’s always difficult,” she continued, “especially now when things are very politically charged, for people to let the emotions settle and to be able to engage with opposing points of view. I hope that what comes out of events like this [is that] people feel motivated to participate, but I hope they’ll also tone down the anger and be able to communicate with people who may not agree.”

“If we’re going to get anywhere over the next few years, I think it’s really important that we can do that.”