Over the years, the sport of gymnastics has grown increasingly popular and admirable. From the floor to the vault, Christian Brothers’ very own Rachel Obmann (’17) has taken tremendous steps to carry out this passion. Her gymnastics career began at a very young age. “I was about six years-old when I started taking the girls’ basic one class,” she […] 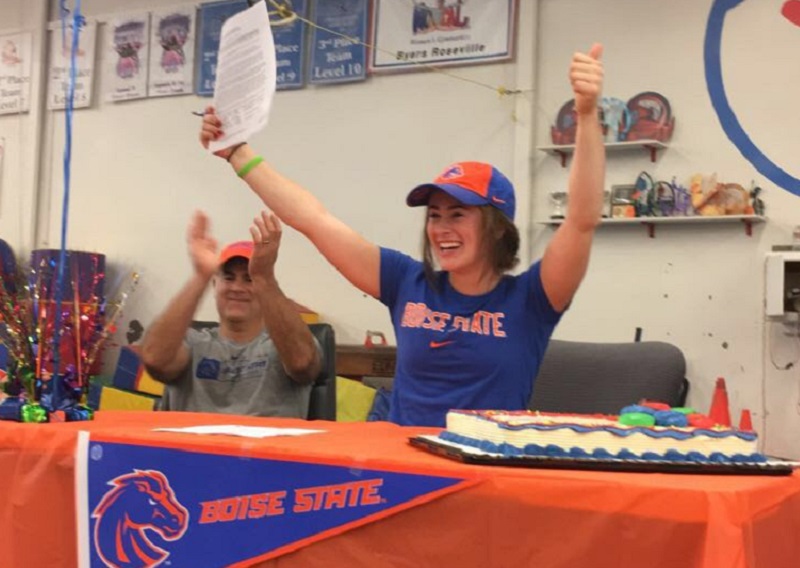 Over the years, the sport of gymnastics has grown increasingly popular and admirable. From the floor to the vault, Christian Brothers’ very own Rachel Obmann (’17) has taken tremendous steps to carry out this passion. Her gymnastics career began at a very young age.

“I was about six years-old when I started taking the girls’ basic one class,” she states. “My sister introduced me to gymnastics because she was doing it and I thought that it looked super fun.”

She and her parents were then opened up to an entirely new sport.

“I didn’t know much about gymnastics,” Rachel’s father admits. “In Ohio, we didn’t have gymnastics anywhere.”

“The great thing about it was that it was something new for all of us. We didn’t have any exposure to this sport other than what you see on the Olympics every four years,” he chuckles.

As a young child, Rachel quickly realized that gymnastics was going to become her whole life.

“I was doing gymnastics and softball,” Rachel explained, “and one day I just thought, ‘I want to go forward in gymnastics,’ so I had to quit softball.”

She soon saw that the intensity would kick up in no time.

“I kept doing gymnastics, and the hours kept adding up since each level got harder and harder,” Rachel reflects. “So I started at one hour a day to four and a half now.”

One of her best friends, Megan Walaitis (’17), is amazed by her dedication.

“She was telling me about everything she has to do for practice,” Megan explains. “I would not be able to do that for so long every single day.”

What started as a hobby quickly turned into a routine.

“At the beginning, I loved it. I always wanted to go to practice every single day,” Rachel recounts. “I was excited because things weren’t super hard for me yet.”

“I thought it was cool when she told me she does gymnastics,” Megan says. “I don’t meet a lot of people that do that.”

But small bumps in the road soon made their first appearance.

“There came a point where it was getting harder, and I didn’t know if I still wanted to do it,” she confesses. “It was a period of struggling because it was hard balancing with school with family life and friends.”

Even after a mentally challenging experience, she knew what path was right for her.

“Eventually I knew that [gymnastics] could get me far, so I’m going to stay,” she confirms. “So it basically wobbles back and forth, but as a whole, I love it because if I wasn’t doing it, I wouldn’t be the person I am.”

However, she has encountered terrible events that put her career on hold.

“Freshman year, I almost broke both of my legs,” says Rachel in fear. “That was really hard, trying to get back in the swing of things and getting my body back into the shape that it was.”

“It took her out for her season,” her dad states. “That was a scary one.”

He took the injury as an opportunity to step up as an encouraging sign.

“I looked at that and realized I had to really find a way to be a champion and a supporter for her as she goes through this.”

The Obmann family was beyond relieved to see her recover.

“We were lucky because we didn’t have a career-ending injury,” Mr. Obmann says graciously.

Her teachers can see that Rachel’s motivated behavior on the beam is reflected in the classroom.

“Rachel tries very hard,” Ms. Tracy Chadbourne confirms. “She comes to class every single day and she gives it everything she’s got. She asks you a million questions, and she doesn’t give up until she gets the concept.”

“It’s kind of an inspiration to see a person try that hard,” she continues. “It inspired me as a teacher, and it definitely inspired her classmates as they watched that.”

Ms. Chad has no trouble seeing how her personality in gymnastics relates to that in academics.

“I think gymnastics gave her the grit to keep trying and fall down and get back up,” the teacher affirms. “You can see it in everything she does.”

Rachel’s father appreciates how gymnastics has shaped her into the person she is today.

“I think that gymnastics built a foundation early on for committing to something,” he explains. “It drives respect for coaches and parents. It creates an environment for teaming, so you learn how to work within a group and rely on your teammates.”

Her athletic ability will contribute to her success as an adult.

“Everything that you do in your sport ends up translating to your job,” Mr. Obmann confirms. “The most important thing that comes out of this is not the actual sport events themselves. When you enter into something at your job that might be challenging or difficult, you’ll look back on those days that you were an athlete and know how far you can push yourself.”

Rachel’s dad has played an important role in her successes.

“When we got into recruiting, I really referred to myself as the sports agent,” he eplained.

He was there every step of the way throughout her college search.

“I was the guy that did the trips to the colleges,” Mr. Obmann stated. “I helped her work through meeting with the coaches and understanding what it meant to look at a college and what to consider.”

He recalls his proudest moment in her career.

“There was this meet in Columbus, it’s called the Ohio State Buckeye Classic,” he reminisces. “She always tended to get hurt right before the big meets. This time it was her foot, a couple days before the meet.”

Getting an injury at this time was bad news since this meet was so crucial.

“This is a big meet because it covers a lot of the Midwest and east coast so there are hundreds of gymnasts there.”

The Obmann family was concerned about the impact of her pain.

“She didn’t know if she was even going to be able to compete,” Mr. Obmann said with slight trauma.

But he was shocked by the outcome of the event.

“She actually won the whole thing!” he laughs. “For a dad, that was the best feeling I’ve ever had.”

After pushing through these struggles, she is prepared for a fresh start. This fall, Rachel made a huge step in her career as she committed to Boise State for gymnastics.

“I’m ready to have a new change of scenery,” Rachel explains. “I’m ready to get out of California. I love my friends and family in California, but I want to meet new people and try new things.”

“I’m excited to be on a team instead of being more individual,” she elaborates.

She looks forward to a chance at strengthening new bonds. The downside however, will be the expectations.

“The negative is that everyone is counting on you,” the gymnast confesses. “There’s so much pressure.”

She also sets new goals for her new environment.

“I’m going to college to get a good education,” she explains, “but gymnastics will also be a big part of that. I want to make a difference to the school, be known, and set some records.”

Her current gym has prepared her well for the future.

“The coach at the gym where I practice does not take any excuses,” Rachel declares, “so I’ve been disciplined to the tip-top shape.”

She has taken lessons throughout her career to heart.

“Time management is one of the biggest things that I’ve learned,” she proudly states. “It’s taught me how to get through the struggles.”

“I’ve learned to be more patient,” Rachel’s father explains. “It’s hard as a parent to watch your kids get injured.”

“It teaches you that… you have to let [your kids] go a little bit.”

Ms. Chadbourne has some positive advice for Rachel’s future.

“Stay focused on your goals,” she emphasizes. “One step at a time, don’t give up.”

Her dad also has high hopes as she continues on at Boise, especially in the importance in taking advantage of the academics offered at the college.

“I hope she remembers all the things we’ve worked with her to make her a well-rounded, responsible adult,” he says.

“My advice to her is to be a student first,” Rachel’s father states. “She has this opportunity over the next four years to have an education and to learn.”

He also understands that gymnastics will not last forever.

“As much as gymnastics is a focal point,” he addresses, “that’s going to end after four years, but those four years of education are going to carry you for the rest of your life.”

“I really hope that she just has fun and enjoys her time there,” Megan confirms, “because playing a sport for college is a once in a lifetime opportunity.”

As Rachel takes her flight from California to Idaho, she will bring a new and incredible legacy. Potatoes won’t be the only things growing in Idaho; so will Rachel’s impressive talents.