It was a cold, brisk morning in Clovis, Calif. on the Saturday after Thanksgiving.  While most people were sleeping in and relaxing after a long two days of eating and shopping, nearly 2,000 runners arrived at Woodward Park in Clovis for the 29th annual CIF Cross Country State Meet.  These runners are the fastest high […] 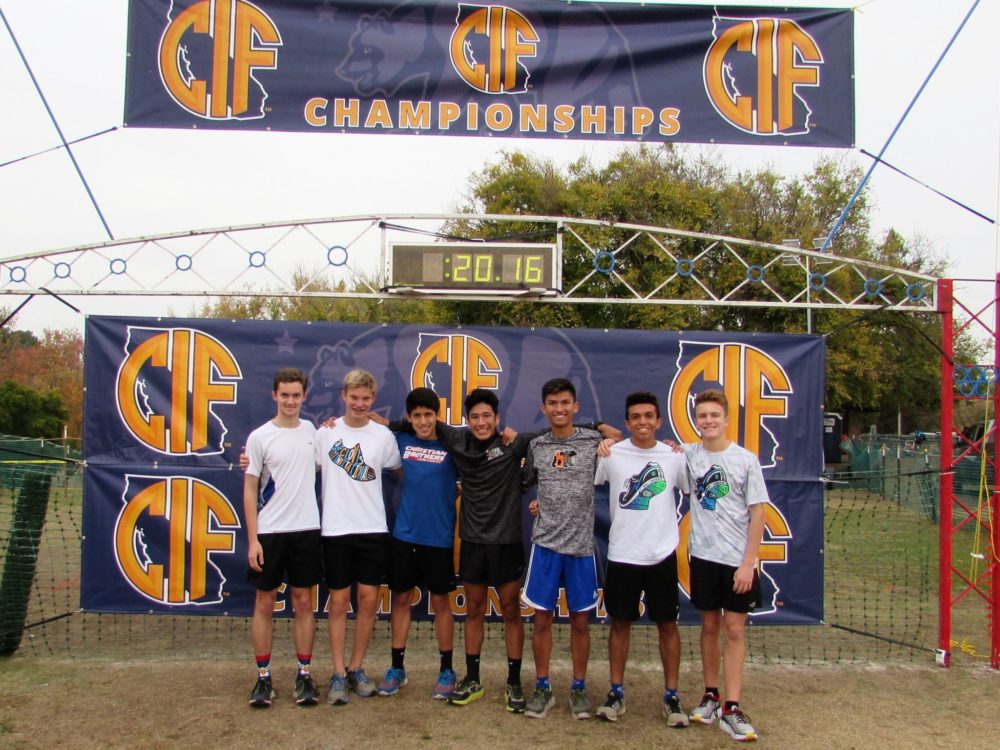 It was a cold, brisk morning in Clovis, Calif. on the Saturday after Thanksgiving.  While most people were sleeping in and relaxing after a long two days of eating and shopping, nearly 2,000 runners arrived at Woodward Park in Clovis for the 29th annual CIF Cross Country State Meet.  These runners are the fastest high school students in California and earned their place in the meet through their outstanding performances at the Section meets.

Among these runners were the boys of the Christian Brothers High School Varsity Cross Country team. On November 12, the CB boys won the Sac-Joaquin Section Championship to secure their berth to state meet.  They successfully defended their Section title from 2015 despite doubts many people had about the young team.

The team lost four seniors from the 2015 season, and going into this season, there was some uncertainty concerning who would step up and run at the varsity level.  Fortunately, sophomores Sam Copley (’19), Nevin Afong (’19), and Alberto Mujica (’19), as well as junior Joe Archer (’18), rose to the occasion.  These four first year varsity runners had fantastic seasons, running faster than average varsity times and keeping up with their returning varsity teammates, Isaiah Jimenez (’19), Patrick Wiseman (’18), and Will Yuponce (’17).

This talented group of seven worked hard all season to achieve their goals of a Section title and a place at state meet.

“State wasn’t easy to get to. It took a lot of hard work and honestly a lot of painful practices, but now I’m thankful I put the work in because we made it and that’s all that matters,”  expresses two time state qualifier Will Yuponce. “Going to State was a great way to finish off my senior year,”.

At the state meet, the boys ran the first race of the day at 8:30 am.  However, the early morning didn’t affect their spirits or their spectacular racing abilities.  The team embarked on their typical warm up around the course and returned to the starting line for their leg drills, strides, and the start.  The gun went off at 8:31.

The pace was extremely quick for the first mile,.  The average split at the mile mark for the runners was about five minutes.  None of the CB boys were in the top 100 when they got to the first mile.  However, they were racing smart and conserving their energy for the back stretch of hills during the second mile and the speedy finish.  Over the next two miles, the boys were able to collectively pass 74 runners.

“The race was crazy from start to finish,” Sam commented. “I ran a 5:10 first mile which is by far the fastest I’ve ever ran for a mile in a 5K.  Also I was right up with Pat and Isaiah until the very end of the race which is something I have never done…I even passed them at some points.” 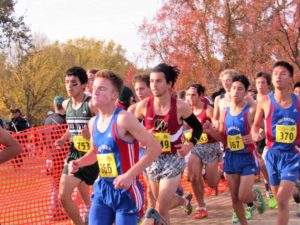 Sam leads the team with Isaiah Jimenez and Will Yuponce close behind him.

Patrick Wiseman finished first on the team with his time of 16:51.  He was closely followed by Isaiah Jimenez and Sam Copley.  All three of them placed in the top 100.

The team was able to move up three places, from nineteenth to sixteenth, during the last two miles thanks to their disciplined race strategy.

The boys raced against a tough field of competitors.  The Division IV race was loaded with strong Southern Section teams like Foothill Technology, JSerra, and Oaks Christian and also included the San Diego Section powerhouse Sage Creek.  The individual winner of their race finished the 5 kilometer course in under fifteen minutes, a feat that had only been accomplished in the Division IV race at state meet twice before.  With such elite competition, the CB boys’ sixteenth place finish is impressive.

Even more impressive is the amazing team effort the boys put forth.  The top six finishers on the team crossed the line within 25 seconds of one another.  Not many cross country teams have the ability or the unity to race together like this. 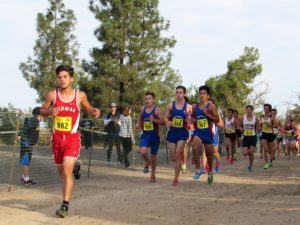 (From left) Sam Copley, Patrick Wiseman, and Isaiah Jimenez run in stride with one another, closing in on a competitor.

The team posted five personal records at state meet which came from Nevin Afong, Alberto Mujica, Isaiah Jimenez, Sam Copley, and Will Yuponce.  Four out of these five were over thirty second improvements.

With six varsity runners returning next season, the team looks to repeat as Section champions for the third year in a row and improve their performance at state.

“We’ll be back next year and God willing will be stronger, faster and smarter,” says Coach Danny Delgado ’79.

The State meet is the apex of the cross country season for California high school runners.  Qualifying for state meet is a tremendous accomplishment and for the CB varsity boys to qualify two years in a row is extraordinary.

“Nothing compares to the state meet,” Sam says. “Not even football highlights or section championships.”