We’ve all been there … You’re sitting in class. Your water bottle is sitting beside you, empty. Your hand is raised, desperately trying to get the teacher’s attention. The teacher finally notices you and allows you to use the restroom. You stand up and head out with a sigh of relief. That’s done. But once […] 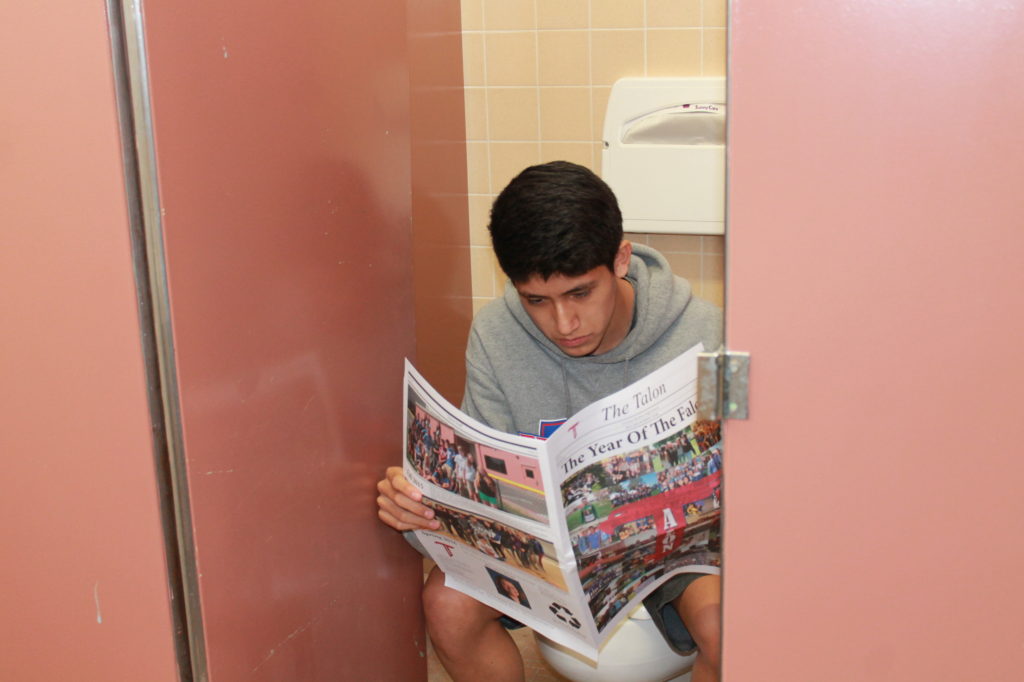 We’ve all been there …

You’re sitting in class. Your water bottle is sitting beside you, empty. Your hand is raised, desperately trying to get the teacher’s attention.

The teacher finally notices you and allows you to use the restroom. You stand up and head out with a sigh of relief. That’s done.

But once you’re out of the classroom, you remember that you’re going to have to choose a bathroom to use, and the wrong decision may lead to an unfortunate experience. It’s depressing. And scary.

Does it feel like a big challenge to choose the right loo? To find a pristine lavatory where you can enjoy yourself in tranquility?

It doesn’t really need to be so hard. Toilet experts Julia Padilla (’18) and I teamed up to rank each and every bathroom on the Christian Brothers campus that can be accessed by students. Julia rated the girls’ bathrooms while I evaluated the boys’. You’re about to learn the best toilet-related advice that you’ll get as a CB student.

Julia: Number 1 may suprise you

Where it’s located: In the locker rooms.

When you should use it: You really shouldn’t, but maybe if you’re in the gym?

Julia: Maybe if you need to change for a sport or PE and then to go to the bathroom. Maybe.

In-depth analysis: You should probably try to avoid this bathroom whenever possible. Paper towels litter the floor. It’s crowded. Paper towels and toilet paper are often unavailable. Oh, and it smells pretty bad.

Where it’s located: Next to the snack bar in the gym.

When you should use it: Not during high traffic times.

In-depth analysis: This bathroom is pretty clean for the guys, but apparently the girl’s side is pretty bad. It’s pretty far away from the classrooms and it’s also locked sometimes, so that kinda sucks too. Oh and it’s really small, so you might have to wait in line and no one wants to do that.

Where it’s located: At the ends of the freshmen and sophomore hallways.

In-depth analysis: The faucets are the kind that requires pressure to work so a lot of the times it’s hard to keep a constant flow of water to wash your hands. Some locks don’t work on the stalls. Also — freshmen. But other than that, it’s really close to the classrooms and easily accessible so that’s good.

Super Soph Alberto Mujica (’17): I hate the middle stall. It doesn’t lock. And not only does it not have a lock, but it opens by itself too.

Julia: I’d like to add that there aren’t any toilet seat covers in the girls bathroom. As a girl, that’s an issue.

Where it’s located: At the ends of the junior and senior hallways.

In-depth analysis: The tiles are yellow, which may have been the original color, but still. The urinals are also really close together and they don’t actually have separate dividers, so that can get weird. And apparently the girls bathroom is easy to clog?  But other than that, it’s close to the classrooms and easily accessible so that’s good.

Some Anonymous Senior Girl: “I clogged one of the toilets once… Yeah… Bad memories.”

Where it’s located: In the intersection of the language hall and math hall, next to the engineering lab

When you should use it: When you’re in the math or language hallways

In-depth analysis: This one’s is ok, I guess. Not much to complain about. It’s clean most of the time and there is always enough toilet paper. Just a regular run-in-the-mill bathroom.

Julia: They’re kinda dark. That’s it. Some graffiti, too, but it’s okay.

Where it’s located: Attached to the field house, facing the sports fields

When you should use it: Whenever you’re near the athletic fields or in the weight room or using the field house

In-depth analysis: This bathroom is  quality. It’s spacious and there are multiple stalls/urinals so you have options. It’s used by guests of CB as well, so it’s always stocked with paper towels and toilet paper, which is always a positive. If you’re at a sports practice, this bathroom is a lifesaver.

Julia: It’s a really good bathroom but it’s crowded sometimes. And sometimes it doesn’t open from the outside. But still a solid option.

2. The Bathrooms Outside the Theater.

Where it’s located: Right outside the choir room, along the side of the theater

When you should use it: When you don’t want to settle for less

In-depth analysis: This bathroom is really nice. Like, really nice. It has slate tiles, which make it classy. It has air freshener and ventilation so it doesn’t smell. It’s not that big, but size here contributes more towards an sophisticated atmosphere rather than a cramped one. There’s always enough toilet paper and paper towels. What more could you need?

Junior Homecoming Court Nominee Daniel Ledesma (’18): How are they not number one?

Julia: I went in there to change for cross country once and there were some choir girls in there who started singing while I was in there. They were good singers, so it was enjoyable.

1. The Bathroom Next to Mr. Eckel’s Room.

Where it’s located: To the right of the chem lab, under the engineering labs

When you should use it: When you want to feel like you’re in on a CB secret

In-depth analysis: Many people consider the choir bathrooms the best on campus. Unfortunately for them, Julia and I decided that the chemistry bathrooms deserved the number one spot.

You might be asking yourself that same question. We have chemistry bathrooms? The is answer is: yes. And they are the best ones on campus. Other than the slate walls, the chem bathrooms have all the amenities of the choir bathroom. But more than all that, you can feel like you’re part of an exclusive club. You see, no one ever uses this bathroom, so it’s always clean and desolate. It’s the perfect place to do your business, ponder life or really just do whatever.

Water sports enthusiast Cesar Lopez (’18): “The Chem Bathrooms has to be the best because no one else knows about them. No one uses them.”

Julia: They’re the cleanest. Therefore, they are the best.

But every time we had to go to the toilet, we learned more about the campus. We followed our curiosity. We discovered which bathrooms to use, which bathrooms were the best. And not long before we wrote this, we learned that many in the CB community weren’t armed with the same knowledge.

Julia and I gave suggestions on when you should use each bathroom based on location. But, you don’t have to resign yourself to the closest bathroom.  Just return to class on time (or don’t and tell your teacher you took so long because you wanted to use a nice bathroom).

So do yourself a favor and commit to improving your restroom choices. And also, commit to keeping our bathrooms clean. It’s not a coincidence that the lesser-used bathrooms are cleaner. Let’s not ruin all the bathrooms on campus and give the janitors more stuff to deal with.