What’s Not To Dig?

How many licks does it take to get to the center of a tootsie pop? How many monkeys does it take to screw in a light bulb? Both age old questions up for debate and with no clear answer, but none more puzzling than: Where’s the support for CB women’s volleyball? The Lady Falcons volleyball […] 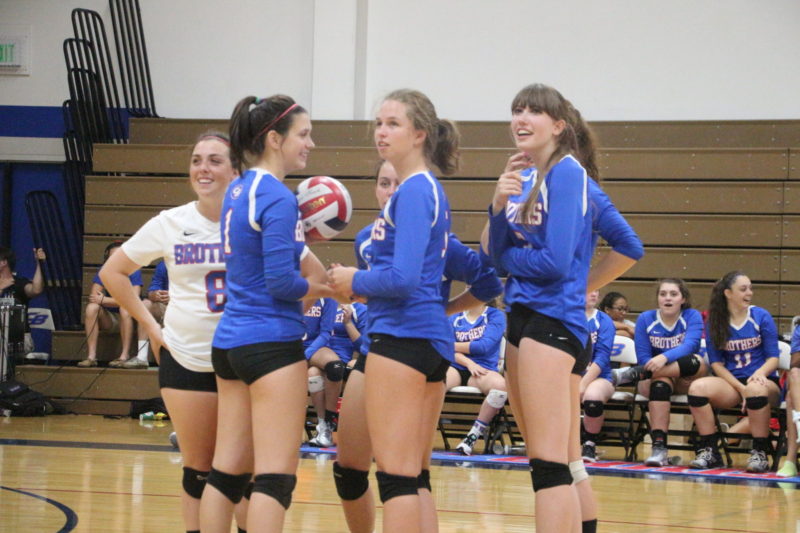 How many licks does it take to get to the center of a tootsie pop? How many monkeys does it take to screw in a light bulb? Both age old questions up for debate and with no clear answer, but none more puzzling than: Where’s the support for CB women’s volleyball?

The Lady Falcons volleyball team has put up some impressive stats over the last several years. Last year the team won over 20 games and a D-III Section Title to top it off. The season before, the Falcons were just one set away from claiming back to back Section Titles. With two league championships, and two Section Titles in just three seasons, this year’s team is the 6th ranked DIII team in the state, and has brushed aside league opponents this season on their way to an 14-4 record as of Monday.

Since the class of ’17 first stepped on campus, no CB sports team has dominated its opponents and collected as many banners as the volleyball team. For all the success the team has had over the last four years, one cannot help but wonder why the “student section” is either empty, or mostly occupied by parents.

The volleyball team plays a fast high-tempo offense and keeps opponents on their toes. The Falcons style of play is great to watch — as are the warmups. When you decide to show the team some support, make sure you arrive early enough to catch a glimpse of the dance parties.

“The dance parties are hard to describe,” says senior Erin Clark (’17). “They’re pretty intense. It’s the best warmup for sure”.

The team might show a lighter side pregame, but do not be fooled — once the first serve is up, the Falcons are all business.

“We all like to have fun, but we’re super competitive. I think that’s unique to our team”, remarks Clark.

Like her teammates , Kenzie Lusich (’17) loves having fun with her fellow Falcons.

“Our team has really great chemistry so getting to hang out with them and laugh all the time is my favorite part [of being on the team]”, says the senior libero.

The girls usually aren’t as tall as some of their opponents. But what they lack in size they more make up for it in skill.

” We have a lot of individual talent, which is great because we work well as a team,” Erin mentions.

The team set some goals at the beginning of the season that might seem audacious to others, but the team has already achieved one goal and looks set to accomplish even more. The team’s first goal was defeat bitter rivals St. Francis, and the team accomplished said goal in style. The Lady Falcons battled back from two sets down on the road to win the annual Holy Court battle.

The team also hopes to finish as undefeated league champions, and so far, the girls have managed to go 4-0. The team’s most ambitious objectives are to win section, NorCal, and state titles. If the Falcons play like they have so far this season, there’s a good chance they can check a few of these goals off their checklist.

With what the volleyball team has to offer on the court; a winning tradition, and players who are fun to watch, why are the stands in the Ron Limberger Gymnasium so empty? There are many theories and excuses for this strange phenomenon, but instead of answering why the student support is absent, let’s examine why the students should come out to support.

“Our team has been quite successful this year and it always fun to watch teams win, but more importantly we all truly love the sport and that is apparent in the way we play,” Kenzie explains. “Personally I believe that watching someone do something they are passionate about is entertaining,”

The Falcons season is winding down, but if you still haven’t come out to a game there’s plenty of time. So come out in blue and show some good ol’ fashioned CB pride for the best team on campus