Falcons Look To Turn Back the Clock

The P.A. echoes through the parking lot. The smell of tailgating and all the sounds that come with it fill the air outside Hughes Stadium. Make no mistake: it’s game day. Senior lineman Eddie Ralph ’10 leads his teammates through the ruckus, marching together towards the tunnel like troops into battle. They are greeted with […] 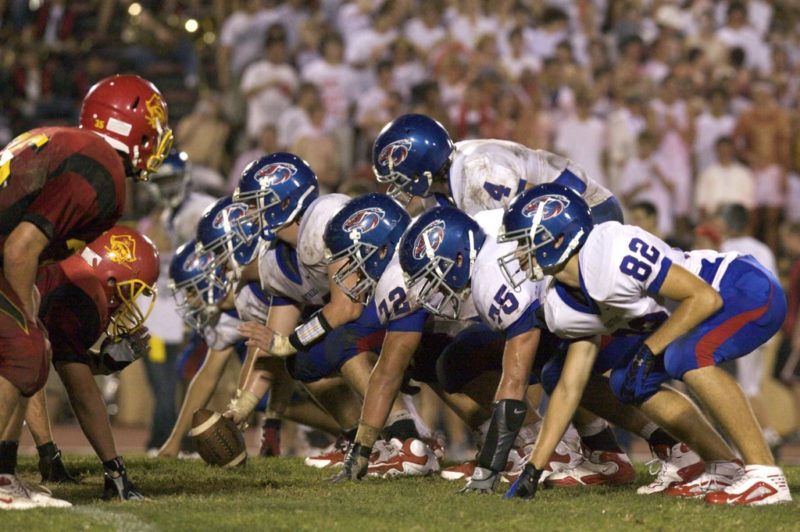 The P.A. echoes through the parking lot. The smell of tailgating and all the sounds that come with it fill the air outside Hughes Stadium. Make no mistake: it’s game day.

Senior lineman Eddie Ralph ’10 leads his teammates through the ruckus, marching together towards the tunnel like troops into battle. They are greeted with contrasting sentiments as they enter what will soon become their battleground. Cheers come from Christian Brothers fans and jeers from the rival Marauder supporters.

To refer to Holy Bowl as “just a game” does not begin to do it justice. The biggest challenge players such as Ralph must face in the build up to the annually highest-attended high school game in the section is dealing with the hype.

“You’re not going to get away from Holy Bowl. It chases you everywhere,” Ralph says. “It’s THE game. It’s what everybody cares about.”

Unfortunately for the Falcons, by the time Ralph’s senior season rolled around in the fall of 2009, CB had tasted the sweetness of victory in the fall classic just once since the 1992 season.

To better understand this historic Sacramento tradition, we must first dive into the roots of the longstanding CB-Jesuit rivalry. The game has been played annually since 1969, and although Christian Brothers dominated the Holy Bowl for the first two decades, it is Jesuit who leads the all-time series 29-14-2.

“There’s a lot of history, it means a lot to people,” the former lineman says.“The rivalry is something that I think is actually rooted in being common. The whole reason there’s a rivalry is that [CB and Jesuit] are the two Catholic schools in the area. There’s something about being similar that leads to that.”

In the eighth grade, many Sacramento area boys are faced with the sometimes daunting task of choosing whether to continue their education at CB or Jesuit. For some, family ties make this decision easier, but nevertheless, the decision to pick one school over the other further adds fire to the rivalry.

“In the root of [the rivalry] is the decision that you made,” Ralph says. “You make this decision when you’re in eighth grade of where you’re gonna go to school, and [winning the game] is like proving in a way that your decision was the right one.”

“That’s where the rivalry comes from,” he finished with a chuckle.

Back to 2009. The sun was set as the crowd of 15,000 plus packed into the horseshoe-shaped stadium with the temperature dropping. The crowd was at fever pitch as the teams lined up for opening kickoff, moments away from the biggest game of the year. All of CB’s hard work over the summer and opening weeks of the season had built up to this game.

“We knew we were the better team,” Ralph voiced with confidence. “It was a matter of we need to go out there and do our thing.”

For his senior season, Ralph’s team flipped the script from years past.

“We went to the coaches and told them we didn’t want to do anything special. We tried to make it as normal a week as possible.”

The football team passed on the mohawks, rallies, and other pregame festivities previous teams had participated in. Ralph’s team elected for a different approach.

“The biggest thing for us going into the game was that we wanted to make it just like any other game.”

The 2009 team had suffered back-to-back heartbreaking losses to the Marauders and were well aware of the dangers of letting the emotions and atmosphere of the game get to their heads. Ralph pointed to incidents of players trying to do too much in the previous match ups which ultimately lead to the team’s demise late in games.

The Falcons’ perseverance paid off that autumn night; they routed Jesuit 21-6 and were instantaneously mobbed by hundreds of CB students and fans. The wait was finally over — the Falcons were back on top. Ralph and his teammates could not have been happier.

As much as some Jesuit fans would like to call the Falcon victory that year a fluke, there is no logical reasoning behind the claim. The 2009 team was graced most notably with the presence of future NFL tight end Asante Cleveland and several other athletes who went on to play Division I football. However, the team had more than just star power.

“We had a very strong bond, and that set us apart,” Ralph says. “Leadership was there. Seniors took control. Everybody held everyone accountable.”

One man who held mixed emotions after the final whistle was Coach Dan Carmazzi. In 2009, Carmazzi was still at the helm of Jesuit, and he remembers well the misfortune that befell his team that night. Coach Carmazzi admits that he tries to “block out” the losses, but recollects that CB had a great time.

“They had a good quarterback, heck of a line, and Asante Cleveland was a player,” he recalled. “That was a special team for Brothers.”

Coach Carmazzi has been around a lot of Holy Bowls — 43 to be exact. The game means a lot to the head ball coach who has coached all his sons under the Hughes Stadium lights.

“It’s something special when you walk out that tunnel,” the current CB head coach explained. “The atmosphere keeps getting better and better.”

Coach Carmazzi warns that the Falcons can’t get too hyped.

“The butterflies are there. Saturday night they’ll be a lil’ bit bigger.”

Coach Carmazzi acknowledged his squad’s hard work and finishes by saying that now is the time that the Falcons “Gotta do it on the field.”

As for 2009 Holy Bowl winner Ralph, he has plenty of advice for this year’s team.

“It’s a normal game. Don’t focus on it as being this crazy, end-all-be-all thing. The second thing is do your job.”

At the same time, Ralph wants the players to enjoy the game.

“It is one of the coolest things. Treat it like any other game, but enjoy it. Because even players that play in college, they don’t have this same atmosphere, and they’ll never get it again.”