You are here: Home \ Arts \ Featured Posts \ The Elorduy Of The Music
Arts
0

The Elorduy Of The Music

The US top 50 Billboard Charts have nothing on Mr. Elorduy’s Playlist.  This year several new teachers have began teaching on the CB campus. Among them, one stands out: Mr. Julian Elorduy ’03, who teaches comparative religion and has a deep, passionate love for music. Throughout my time here at Christian Brothers, I have never […]

The US top 50 Billboard Charts have nothing on Mr. Elorduy’s Playlist. 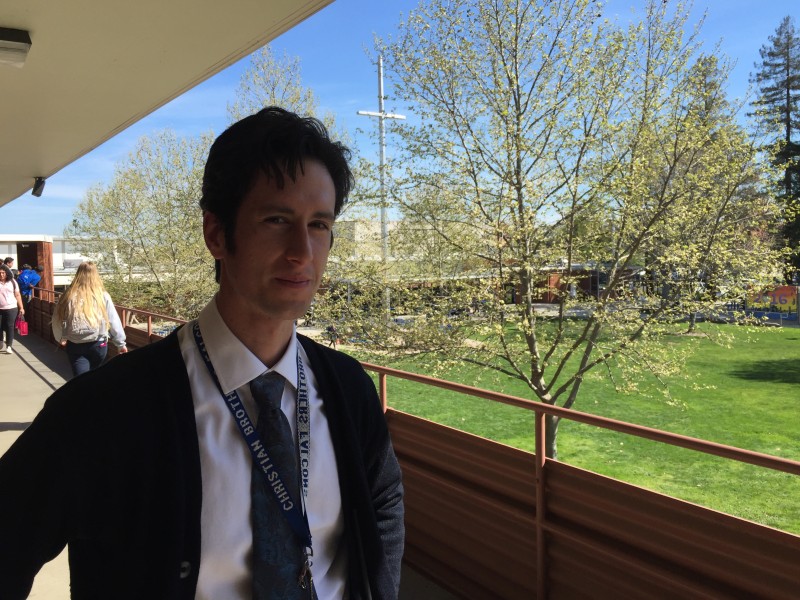 This year several new teachers have began teaching on the CB campus. Among them, one stands out: Mr. Julian Elorduy ’03, who teaches comparative religion and has a deep, passionate love for music.

Throughout my time here at Christian Brothers, I have never entered a class more interesting than Mr. Elorduy’s. Every day he plays music at the beginning of his class. The strange thing is that the music that he plays isn’t the typical mainstream music — it’s always something that is out of the ordinary and different.

But one person can’t find all the different types of music overnight, so I talked to him about how he has been involved with music and he said that he used to work at a radio station at KDVS 90.3 FM, the UC Davis radio station. Being a part of the radio station business helped Mr. Elorduy to gain a better knowledge of how to get music.

“Doing that taught me a lot,” says Mr. Elorduy. “I’m an avid consumer of music so I seek it out however I can,”

In this day and age, there are several opportunities to discover music through several Apps for certain phones and devices. But Mr. Elorduy takes a different approach,

“YouTube used to be really good at recommending content but they seem to feature more paid content now. Spotify does a good job recommending things to me,” the religion teacher says. “But I find the best way to find new stuff is by asking my favorite people what they are listening to.”

From my personal experience, word of mouth is always the best way to discover what people are listening to. What people listen to help you understand a little more about that person and their personality.

Not only does Mr. Elorduy have an obsession with any type of music, he also makes some of his own. When he first started out making music he drew his inspiration from a Pixies concert.

“Everyone was singing along and there was just an amazing feeling in the air,” says the Mr. Elorduy. “I also get inspired by my friends and family, being out in the open taking in the beautiful world or just getting upset about something political or an injustice in the world.”

To this day the teacher is still involved in the music world.

“I continue to write and play music on my own but I’m not a professional,” he says. “I like sharing in the experience of music with others”

Music is constantly apart of our lives and is used everywhere. Many use it for exercise, homework, a party or celebration, and many other occasions. Mr Elorduy on the other hand uses it for meditation or just to get up and dance around the house for a little bit. Music also helped him with a more personal aspect of his life.

“When I was younger it helped me get out some feelings I had about the world,” he stated.

Music has many genres, and people will usually focus in on a certain type they like. But Mr Elorduy is very open to any type of music.

“I listen to a lot and spread my taste pretty thin. I appreciate crafty song writing and tasteful melodies but my mood dictates a lot of what I listen to,” he says.”For example my last playlist was all about Cass McCombs, before that it was Tom Petty, but I also like modern R&B like Kelela and the Fade to Mind production team.”

Mr. Elorduy is arguably be one of the most interesting new teachers around campus whether it deals with music or teaching in the classroom. He is always on the prowl for new music, if anyone wants to share a playlist or artist, have at it!