You are here: Home \ Community \ Featured Posts \ Don’t Weep If You Don’t Get Enough Sleep
Community
0

Don’t Weep If You Don’t Get Enough Sleep

Lack of sleep in the CB community is becoming an increasingly large problem. But is there a way to fix this nightmare? Most advice given by parents and peers alike tell us to get seven to eight hours of sleep each night. But is that actually a realistic expectation? From what I’ve heard from CB […]

Lack of sleep in the CB community is becoming an increasingly large problem. But is there a way to fix this nightmare? 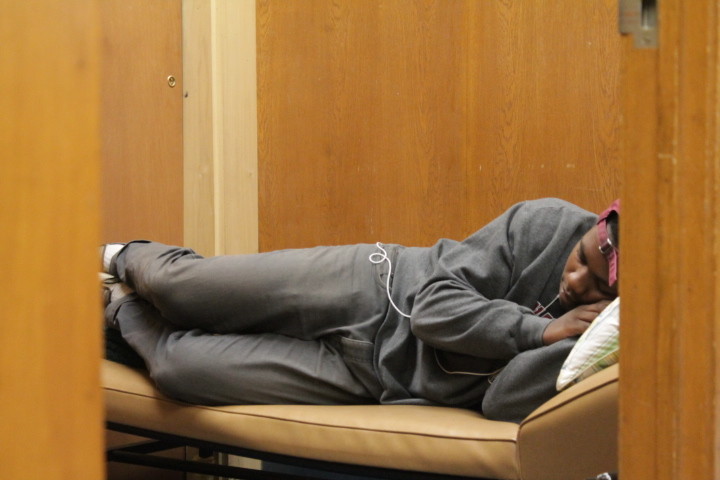 Most advice given by parents and peers alike tell us to get seven to eight hours of sleep each night. But is that actually a realistic expectation?

From what I’ve heard from CB students, the answer is no.

In fact, many high school students are known for being constantly known for being tired by their friends and their teachers, and there seems to always be a constant conversation going on about sleep deprivation. No one gets TIRED of it.

It has become the dream of most students, including myself, to get more sleep on a day to day basis. So I decided that I would talk to a couple of juniors to get their input on the infamous sleeping problem.

“On a school night, I probably get about five to six hours [of sleep],” Michael Castaneda (’17) shares. “I don’t get a lot of sleep because I procrastinate my homework and I start about 9:30-ish.”

Countless others have fallen victim to procrastination like Michael, most picking up their phones to check their social media feeds, which scroll on for hours.

Similarly, I get around four to five hours of sleep every night because of procrastination and homework. It seems as if throughout the day there isn’t much, but it all piles up at the end of the day and warrants hours of attention. Unfortunately coupled with procrastination, homework has me awake at all hours of the night, all too many of them involving blasting loud music to stay up.

The short time I spend sleeping makes waking up an extremely difficult task. Even after  dragging myself out of bed, making my way through the school day is an even more daunting task without the aid of a cup of coffee.

“It takes me five to ten minutes to wake up, and when I get up, I take a coldish shower to really wake me up,” he states.

Anything that warrants a cold shower must not be fun. The phrase “desperate times call for desperate measures” perfectly sums up the situation, I think.

Michael thinks it is a bit difficult to get through the day after a night containing few hours of sleep, but he never falls asleep during class.

“It is difficult to retain the information [gathered during school] for later,” the junior says, adding that this makes doing homework even harder.

In the end we all get through the sleepy days and everyone gets their assignments completed and submitted, even if it takes all night.

Although many identify with Michael and I, there are a rare few that make time to get their fair share of sleep every night. One of those rare few is our fellow junior Kathleen Donovan (’17).

“I go to bed around 10 or 11 PM and then wake up at 6:30 AM, unless it’s a late start, then I wake up at 7:45 AM,” she matter-of-factually shared, which means she gets on average around eight hours of sleep, just as advised.

It took me a little bit of time to try and logically figure out how she could get that much sleep before I just had to ask her “HOW?!!?!?”.

“I don’t receive much homework from my teachers, and a lot of my work I do in class,” she states.

So I guess the key to getting more sleep is taking advantage of your time. If you have a few minutes here or there, take them up by getting a bit of homework done, even if there’s only enough time for one question. Doing that lessens the load of homework due for completion upon arrival at home.

This proactivity in turn allows more time for you to rest and be refreshed for the next new day.

I know I myself have tried this method a few times, and I have not been very successful. It all depends on the person in the end.

But for those of us who cannot shake our not so great habits of procrastination, there is a light at the end of the tunnel for all of us to look forward to: the weekend.

I know that every Friday night begins with a grand opportunity to make up for all of the sleep I lost during the school week.

So even if we may not have the best sleeping schedule during the school week, the weekend is always there for us.

If you ever end up thinking you’re alone in not receiving quite enough hours sleeping or in receiving the proper amount of time sleeping, there is always someone in the same situation that has a piece of advice, and if you don’t succeed, you can always look forward to the weekend.

But if you believe you can get more sleep, you most certainly push past your obstacles and obtain it. In the words of Walt Disney, “If you can dream it, you can do it.”