You are here: Home \ Community \ Featured Posts \ The Tantalizing Taste Of Tea
Community
0

The Tantalizing Taste Of Tea

CB’s own Tea Time Club has become one of the most popular and expansive clubs on campus this year. A mug of hot water, a teabag of your favorite tea variety, and an optional teaspoon of sugar. That’s all it takes to make a simple, yet delicious cup of tea, according to Tea Time Club […]

CB’s own Tea Time Club has become one of the most popular and expansive clubs on campus this year. 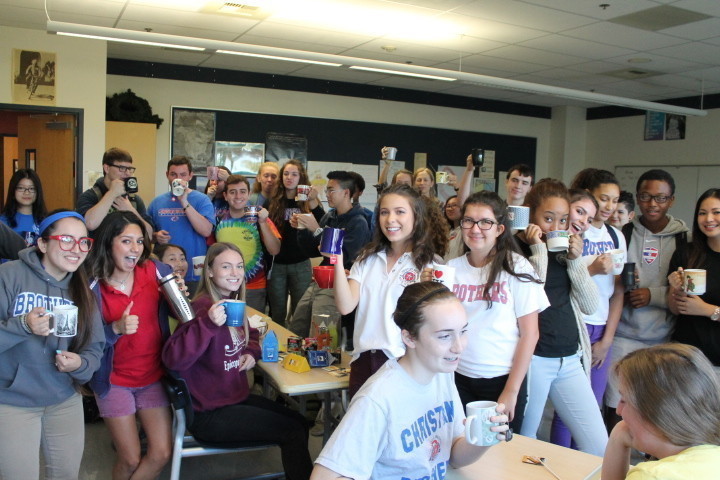 A mug of hot water, a teabag of your favorite tea variety, and an optional teaspoon of sugar.

That’s all it takes to make a simple, yet delicious cup of tea, according to Tea Time Club moderator Mrs. Kelly Safford.

In its third year of existence at Christian Brothers, Tea Time has become a popular and well-known club that appeals to students with a chance to try new varieties of tea, an increasingly popular beverage in today’s world.

The club’s history dates back to 2013, when two seniors at the time, Josh Stone ’14 and Sophie Lee ’14, introduced the idea of starting Tea Time and asked Mrs. Safford to serve as the staff moderator.

Every year since, Tea Time has been represented at CB’s annual Club Day that is held in mid-September.

In recent meetings, Mrs. Safford has noted that there are upwards of 30 people in attendance, observing that “it’s never been this big before, but this year it seems to have really grown.”

Set in its inaugural year, the club’s primary purpose is to give students the opportunity to take a breather from academic demands during break and come together over a cup of tea.

“We decided that we wanted to have a time set aside where everyone could just relax and have time to not be stressed out about school, and just have a nice warm cup of tea,” recounts the calculus instructor.

Beyond the obvious appeal of joining the club to meet with friends over a hot beverage and to find reprieve from the demands of school, drinking tea in the club provides very positive health habits for members.

“Tea has a lot of antioxidants in it, and if you don’t drink it with tons of sugar then it can be very healthy” explains the tea club moderator, adding that “herbal teas don’t contain any caffeine, and even black teas that do have small amounts of caffeine are still good for you.”

Harrison Daly (’17), a two-year member, enjoys being a part of the club and has become accustomed to drinking multiple cups of tea on a daily basis.

“I drink tea every single day, at least 2 or 3 cups, along with my other two cups of coffee. Those are my two primary beverages, but tea is really nice,” describes Harrison, the celebrity host of KBFT’s special news feature The Weekly Daly.

In contrast to Harrison’s taste, however, the average high school student in today’s world most likely prefers to drink sugary beverages as opposed to herbal teas, which provide a very healthy alternative to sodas, energy drinks, and the like.

“When you drink a sugary soda, it’s refreshing, but it’s very temporary, ” says Mrs. Safford. “When you drink tea, it’s much more calming and relaxing and is better for your heart and overall well being.”

People like Harrison have integrated drinking the soothing beverage into their routines and have come to appreciate the health benefits that it offers.

Understandably, Tea Time has particular appeal during the months of November through February because many people prefer to drink a warm cup of tea in seasons when the weather may not be as pleasant.

“[The club] is very popular during the winter, especially on the colder days,” describes Mrs. Safford, who has already seen the number of members in the club this year grow at a seemingly exponential rate.

Tea varieties offered at meetings differ by week, but are quite expansive, ranging from white and green teas to stronger black teas.

Mrs. Safford, whose personal favorite is mint tea, indicates that some new additions to the club this year include a specialized “Tea” shirt and several different tea varieties that are brought to the meetings for students to taste.

Tea Time meets every Wednesday at break in Room 610, so any student who wants to is encouraged to bring a mug and come out to join other members of the CB community over a relaxing cup of tea.