You are here: Home \ Falcon Sports \ Featured Posts \ Do They Have Spirit? No, They Don’t
Falcon Sports
0

Do They Have Spirit? No, They Don’t

The kicks and flips, the flailing of arms, the pom poms and mandatory bows, and every injury in between — this is CB cheerleading — through the eyes of two unlikely former squad members.  Almost every middle school girl has, at one point or another, dreamed of being on their high school cheer squad. But […]

The kicks and flips, the flailing of arms, the pom poms and mandatory bows, and every injury in between — this is CB cheerleading — through the eyes of two unlikely former squad members. 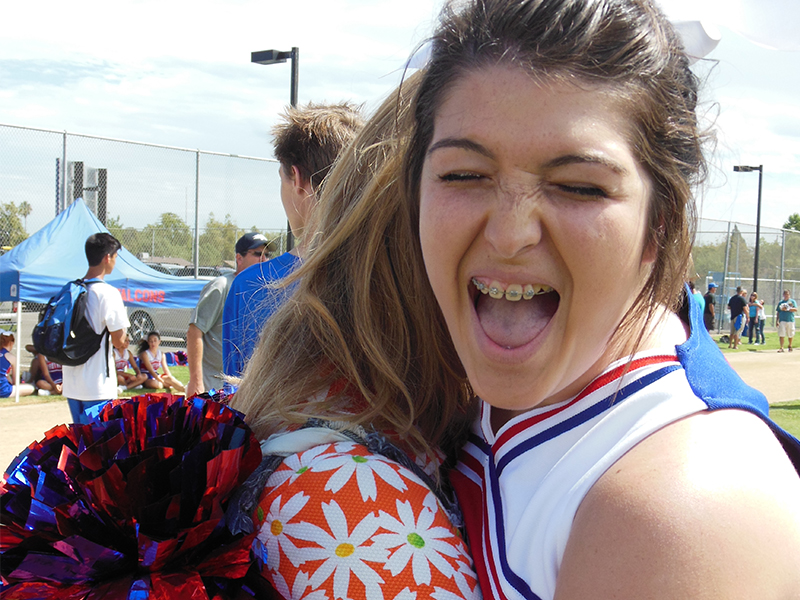 Almost every middle school girl has, at one point or another, dreamed of being on their high school cheer squad. But interestingly enough, cheerleading is the most underground sport at CB.

It may come to a surprise that CB seniors Emery Cline (’15) and Bailey Heng (’15) were cheerleaders in their early years of high school. The initial reaction of everyone when they find out Emery and Bailey were cheerleaders (with Bailey as the unanimously voted captain) is typically shock, silence, or confusion. They just aren’t people who seem to fit the cheer criteria.

You may know Bailey Heng from her Twitter account, but if you don’t, allow me to fill you in. Some of her interests include but are not limited to: politics (particularly Vice President Joe Biden), crime shows, airdropping pictures of Vladimir Putin on a horse, and sarcastic cynicism.

And perhaps you know Emery Cline for her dry humor and quit witted dialogue.

As you’ll see throughout the article, both Emery and Bailey have a distinctive sense of humor. Those jokes you think of twenty minutes after the conversation – Bailey and Emery probably already thought of them.

So why would Bailey and Emery, two of the most unlikely team candidates, join a sport which requires dancing along to Justin Bieber/Camp Rock mash-ups?

“That’s a very good question…that I have never asked myself,” Emery laughs. “It was the only sport I hadn’t tried. But I was bad. Very surprised I made the team. Even more surprised I stayed on the team. Ya know, I had no experience so I could only go up. Except I went down, so…”

But as revealed by Emery, cheerleading isn’t all pom poms and clever rhyme schemes. There’s a more dreary side to the relentless squad which the onlookers don’t see. I don’t mean the stereotypical catty behavior commonly associated with cheer squads — I mean the inescapable injuries.

“I only dropped the flyer once. I didn’t even know we had to throw people in the air. I even dislocated my collar-bone once.”

The years of cheer certainly left its mark on Bailey and Emery. Though both cheer alums have since thrown in the towel (perhaps for the best), they both agree that cheer-leading was the pinnacle of their high school existence. In fact, they both often find themselves absentmindedly reminisce back to the good  days.

“My two years of cheer-leading were definitely my prime. I used to be somebody but now I’m just an empty shell of the person I once was,” says Bailey.

Both Emery and Bailey recall moments of cheer that, in retrospect, they’ll always hold dear, some more excruciating than others — my personal favorite being when young children supposedly threw skittles at them during a football game. But through the tosses and turns and kicks and flips, both Bailey and Emery still looks back on their time on the cheer team with pride, fond memories, and a bit of laughter.