The Helpful Apps Of CB

Does the Christian Brothers community have any apps that help them in school? 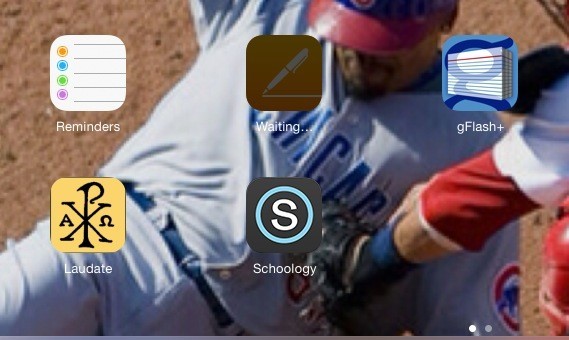 The iPad has been disliked by many teachers because of all the distractions with the games students play on. Although the iPad is a big distraction, it is a tool to be used seriously for school.

Most Christian Brothers students use Notability, but Heidi Holman (’14) uses Pages, which is a paid app that can be used to create reports, resumes, and documents in minutes.

“I write all my MLA papers because you can do more formatting” says this studious student.

Heidi also uses an app called Reminders which comes with every iPad and cannot be deleted. It is a great way to keep her in check with homework and projects as well as important dates to remember for assignments.

Veronica Martinez (’14) uses gFlash for memorization.  It is a free app for people who do not have flash cards at home to use.

This app is known to be the best free flashcard app on the market according to the Apple app store. This app also has a new matching game study mode with a very easy to use interface.

Laudaté is an app widely used in the religious department for mostly prayer. In my Mystery of Suffering and Death class my last semester, my class used it for prayer and we would read it to the class when it was our turn that day.

Mr. Rene Cardenas uses Pandora, a music app, as a reflection tool to study his life and see where he is going. He also uses another app called Timeline Eons ($6). It is a graphic representation of the entire natural and human history.

“It goes way back, virtually to the big bang. It’s amazing,” Mr. Cardenas says with astonishment

He uses it to understand the history of the Hebrews and the Israelite people all the way to present day. This is a cheap app, only about four dollars on the app store.

Pandora is a wide known app but the best app for music is Spotify. Spotify is a free app where one can access a world of music and never worry about playing a playlist and not liking a song on that playlist.

You would have to buy the premium version to have unlimited skips on an android or iPhone. For tablet and an iPad skips are unlimited so those are more attractive for the music listener.

The iPad IS a distraction but only when used for the wrong purpose. CB brought the iPads to be used for school and with the help of Reminders, Pages, gFlash, Laudaté, and Pandora, school can be made easy and also fun.