“It’s Just Too Much Bread”

The Talon’s Nick Garcia goes on an emotional journey in search of truth, justice, and thinner bread. In the fall of 2011, Christian Brothers began utilizing a new tool for school lunches, Sodexo. Or something. I don’t actually know what it’s called. SoGo? Either way, this is an opinion piece so facts don’t really matter! […]

The Talon’s Nick Garcia goes on an emotional journey in search of truth, justice, and thinner bread. 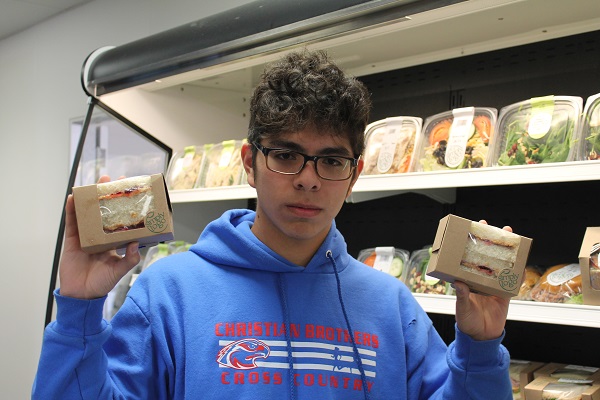 In the fall of 2011, Christian Brothers began utilizing a new tool for school lunches, Sodexo. Or something. I don’t actually know what it’s called. SoGo? Either way, this is an opinion piece so facts don’t really matter! [Editor’s note: Yes, facts very much do matter, Nick]

But anyway, Sodexo came, students purchased the food, and the new lunch program was a success.

But then a calamity occurred. This school year, something changed.

This school year, the bread is thick.

Allow me to elaborate. The bread CB currently uses to make its sandwiches is thick enough that each slice could be cut in half and used to make a separate, whole sandwich. If I were to guesstimate the percent value of a grilled cheese sandwich purchased through Sodexo, I would say they are 88% bread, 10% cheese, and 2% love. All food gotta have a little bit of love.

I would like to take this moment to give my respect to the lunch staff at Christian Brothers. It may seem as though this bread monstrosity is their fault, but I don’t blame them. Unless they are the savage beasts choosing to buy the thick bread at the supermarket. But I doubt that is the case, as supermarkets don’t tend to carry mutant wheat-based products. But again, the lunch ladies and gentlemen are fantastic, always there to satisfy my hunger, even if the food they sell is not.

If you ever purchased a sandwich through Sodexo before this school year, you may have noticed that the bread was normal sized, but you probably didn’t notice, because expecting a reasonably sized piece of bread is reasonable.

“But Nick! There are plenty of options that aren’t made using bread, like pizza or the daily meal!”

True, hypothetical stranger — but I don’t eat meat, I am a pescaterian. So what is a health seeking meatless being to do? Start eating meat? Never, you carnivorous swine.

Bring my own lunch? My mother and I are worse than the federal government — she refused to keep making me lunch after 3rd Grade and I refuse to make my lunch; it’s the lunchtime shutdown. So I’m sorry that I have no options.

Other than the occasional meatless daily meal, I usually walk into the tiny food cave, look around at the slices of bread stacked on the refrigerated shelves, and after a short moment of indecision, I always grab Frosted Mini Wheats. I like Frosted Mini Wheats, but no middle class Catholic high school student should ever be forced to eat the same moderately satisfying cereal every day.

To no surprise, I’m not the only one who has shunned this culinary pariah. CB Literature teacher Ms. Mary Bowers stopped purchasing sandwiches from the cafeteria, hopelessly stating “it’s just too much bread.”

So why did this happen? Why are people of refined taste forced to deal with overzealous bread lover foods? I tried to focus an article on this and answer my own question, but stupid idiot Mr. Anderson said this story had no gravitas. Hah, well we’ll see about that when I insert my personal opinions, made up facts, and a lot of bad jokes. THE MAN IS HOLDING ME BACK.

New idea — Mr. Anderson is working with Sodexo to keep the thick bread in circulation. Why? I have no idea. I’m way too lazy to make up a legitimate reason.

I am trying to alert the public of a clear and present danger. TAKE ACTION, CITIZENS. What action? Sign this online petition. Alert the Talon of your dissatisfaction with the thick bread through the Google Form below, and we will overwhelm the administration with our sheer numbers.