CB alums recall some of the greatest matchups in the history of Sacramento’s most storied rivalry. This Saturday marks the 43rd annual Holy Bowl.  This traditional rivalry game is filled with rich history and school spirit and it is the one night a year that thousands of students and alumni gather to display their love […]

CB alums recall some of the greatest matchups in the history of Sacramento’s most storied rivalry. 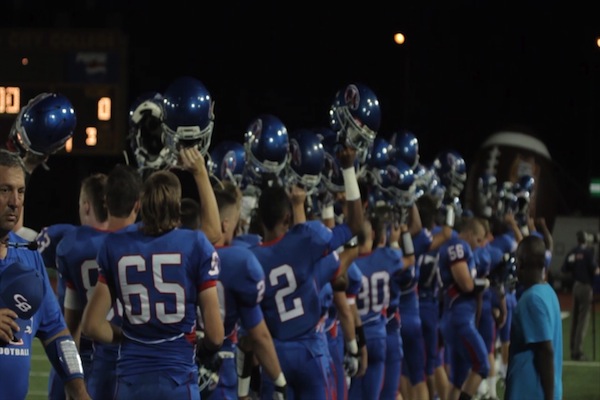 This Saturday marks the 43rd annual Holy Bowl.  This traditional rivalry game is filled with rich history and school spirit and it is the one night a year that thousands of students and alumni gather to display their love and passion for their respected school.

The very first Holy Bowl goes way back to the 1969 season.  At the time, CBHS had the beginnings of a strong era of football ahead of them while Jesuit was seen as the new school on the block, eager to impress.  Sacramento’s local Catholic newspaper, The Catholic Herald was constantly updating the status of each school’s progress throughout the season.  There was articles and pictures about each school and the outcome of each game. Both school’s media attention sparked the idea of playing the first ever Holy Bowl.

The first Holy Bowl was played at American RIver College in the fall of the 1969.  It was the last game on the schedule for both teams. After a tough battle the Falcons walked out of the very first Holy Bowl victorious by a final score of 21-13. This tough and exciting atmosphere really set the tone for what the rivalry stands for today.

The passion and sense of a real rivalry was noticeable even in the early stages.  CB’s current Athletic Director, and Offensive Coordinator Mr. Dan Carmazzi ‘71 was lucky enough to experience the first two Holy Bowls.

“They were more than rivals — we just wanted to beat them so badly,” said Coach Carmazzi of the first Holy Bowl.  “They felt the same way.  The first bragging rights were at stake.”

It is so special to see how much a non_league game meant to both squads. As starting quarterback his senior season, Carmazzi led the Falcons to a Metro League Championship and an undefeated season going into the Holy Bowl.  However, an 8-7 loss to the Marauders has haunted the Christian Brothers  for years.

“Its something we all think about,” he says. “I know I think about it.”

The tradition continued into the mid 1990’s when both programs were thriving.  The 1993 season was quite memorable for the sake that there was two Holy Bowls. The first meeting was set at the beginning of the season when the Marauders beat the Falcons 14-0 in what was remembered to be a thrilling game.

Carmazzi was the coach of the Maraduers by then and he recalls watching his oldest son Matt score a touchdown and celebrate with the Jesuit fans as one of the greatest Holy Bowl memories he had experienced.  On the other side of the field the Falcons were eager for their second shot at Jesuit.

“It was our season goal,” explained Mr. Brendan Hogan ’95. “We’re going to win league and play Jesuit in playoffs”

CB ended 1993 as co-champions of the Metro League and got the much desired rematch of the Holy Bowl.  There was just as much or if not more hype for the second round, but the Falcons went on to lose their rematch with Jesuit.

Today the magnitude and sense of pride is stronger than it’s ever been.  Memories are made each and every year.  It’s that passion, the love for the game, the community, and pride that keeps calling fans back every year.

“Waiting to come out of the Tunnel and see the thousands of people in the crowd is what makes the Holy Bowl special,” says Caden Noon ’13, the starting quarterback for last year’s Falcon squad.

With 42 years of fun and exciting memories to its name, Saturday’s game promises to be another thrilling round in the greatest high school rivalry in the greater Sacramento area.