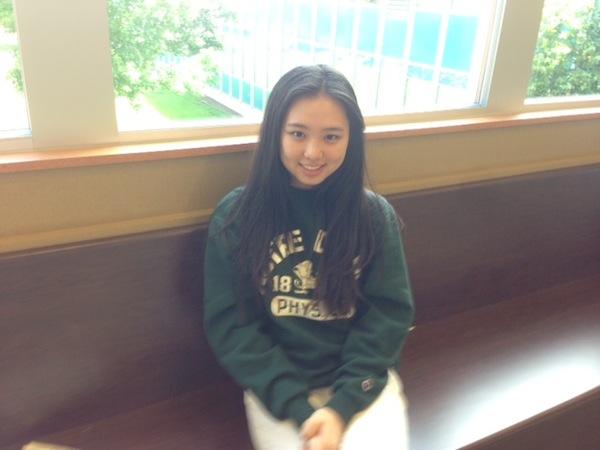 Now that the school year is winding down, the Talon sat down with exchange student Kelly Xia (’15). During the interview, Kelly revealed her opinions on life here at Christian Brothers and the United States in general.

For Kelly, the various cultural differences between China and the U.S. have made adjusting to life here at CB somewhat difficult.

“There are a lot of cultural differences between here and China,” explains Kelly. “For example, the food here is kind of a big problem for me because I don’t really like the food here.”

“School is totally different here, I’m from South China and we don’t have lockers, and we don’t change classes from set to set,” reveals Kelly. “Instead, it’s more like elementary school there — we have one class and teachers are the ones that move from class to class.”

Although high school and sports go hand in hand with each other her in the U.S., China sees the school as a place mainly for academics.

“We don’t do sports as much as you do over here, and if you want to play sports you must look for opportunities outside of school,” says Kelly. “School is considered to be purely academic, but we do have P.E. lessons.”

Unfortunately’ Kelly has also had to deal with the homesickness that inevitably occur whenever she is away from her family for such a long amount of time.

“The first two months were really difficult for me, and a I really wanted to go back home because I missed my mom, my friends and family,” divulges Kelly. “What helped me was just working through it and focusing on schoolwork, and that helped me get rid of the homesickness.”

Despite the many hardships that Kelly has had to face this school year there are many aspects of Christian Brothers that Kelly enjoys.

“The weather here is very comfortable,” says Kelly. “I think school life is pretty good and I also like that the academics here aren’t that hard.”

Overall, Kelly describes her experiences here at CB as pleasant, and hopes to have an equally splendid time next year.