Softball Falcons Give Back 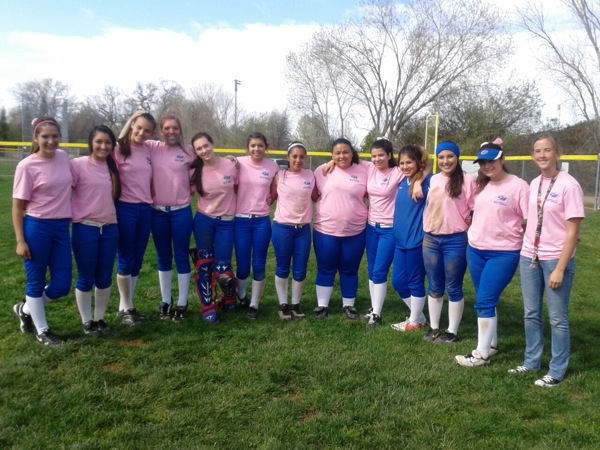 The Christian Brothers Varsity Softball team competed at Oak Ridge High School this past Saturday, where they took on the St. Francis Troubadours.  Despite a tough loss, the Falcons came out with a moral victory, raising over $400 for the Albie Awareness Foundation, an organization that raises awareness about breast cancer.

The foundation was created after Albie Carson, a native Sacramento resident who succumbed to breast cancer in 2002.  Since then, the Foundation has been raising money to make people of the different methods of prevention, detection and treatment.

CB honored the late Hilde Nivens, the wife of assistant coach Mike Nivens.  She lost her battle to cancer four years ago, and team decided to play this game in her honor.  The team also wanted to honor a teammate who lost her mother to breast cancer recently.

Senior Lucia Lopez (’13) enjoyed the experience of playing for a charity.  It was more than just another game — for her, it was an emotional experience due to the team’s history with the disease.

“Helping out a local charity was a great experience,” Lopez said. “It was quite emotional for the team as well because one teammate lost their mother to breast cancer.  We dedicated our playing time and [money for] our teammate’s mother and to other women dying from cancer.”

Lopez feels it is imperative to donate to charities such as the Albie Foundation because these charities use the money to help those people that rely on them.

“It is important to donate to this cause because not only do we live up to our LaSallian core principles,” the senior explained.  “We give charity to a local group who need our help to save women in our area who suffer from breast cancer.”

A CB player who wishes to stay anonymous raised a little over $200. She sold treats and other hand crafted items to contribute Coach Nivens ended up matching the donation.

“I know that our coach’s wife died of breast cancer and I knew I wanted to raise more money than just putting money in for attending,” the player stated. “I wanted to donate all the money under my coach’s wife’s name.”

The CB softball team is living out the mission LaSalle wanted for his students. The team demonstrates its dedication for the poor and social justice, one of the five core principles. There is no doubt this team will leave a lasting legacy for the future CB teams.

Because was the first CB softball team to take place in the Albie game, the event will surely continue to grow and gain popularity over the years to come.