The Cost Of Progress

Construction of CB’s new theater is underway and has so far provided positive and negative ramifications on the routines of students and teachers. In the past few weeks, Christian Brothers High School has taken the first steps toward the construction of the new performing arts venue. Although the theater is certainly a fantastic project, initial […]

Construction of CB’s new theater is underway and has so far provided positive and negative ramifications on the routines of students and teachers. 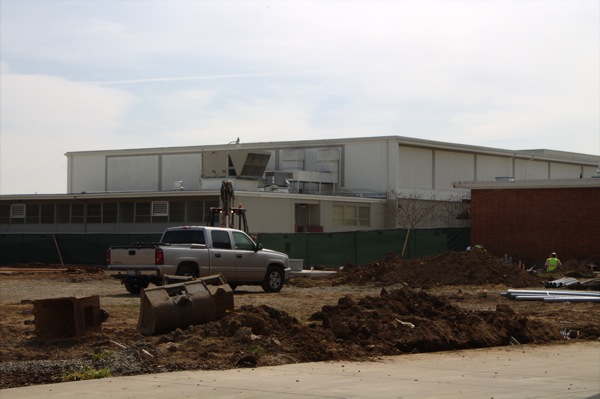 In the past few weeks, Christian Brothers High School has taken the first steps toward the construction of the new performing arts venue. Although the theater is certainly a fantastic project, initial construction work has caused difficulties for both students and faculty.

The initial demolition of the classroom portables required the use of a variety of heavy machinery right on school campus. The machinery caused a large amount of noise and ruckus; causing many teachers and their classes to become distracted.

Ms. Stephanie Roybal was especially disturbed by the noises due to her classroom’s close proximity to the construction site.

“When they were doing the initial demolition the noise was pretty loud, but as a teacher you have to teach through it and try to keep your students focused,” says Ms. Roybal.

Having a classroom located right next to a construction site has its downsides, but the U.S. and World History teacher has turned the ruckus into a learning opportunity.

“The construction itself was very interesting to watch so on block days I would give them breaks after they’ve finished the assignment and allow them to watch the ongoing construction,” Ms. Roybal says.

Distractions from the construction were not limited to only teachers, but many Christian Brothers students also have had trouble staying focused due to the commotion outside. Austin Chan (’14) and Eric Domek (’14) found their classroom concentration halted whenever loud crashes from the theater construction occurred.

“During one instance, I was eating some Skittles in class when a loud boom outside caused me to spill my delicious candy all across the classroom floor,” Austin says.

Eric has used the construction as an exercise in imagination.

“[The construction] gave me a great distraction during class because I’d be sitting there, bored, when I hear these loud noises and I can only imagine what they’re doing out there,” says Eric.

A rent-a-fence has also been raised in order to seal off the construction sight from the rest of the school campus. This fence has supposedly been the cause of a recent surge of student tardies, as students have been delayed from their desired classrooms because of the fencing.

“I just can’t stop looking at those machines work, which usually causes me to be late for my next class,” Austin confesses to the Talon.

Ms. Roybal said her class hasn’t had too many problems with tardiness due to construction woes.

“My students are always pretty prompt, they learned to plan out their routes and they’ve learned to go to their lockers before multiple classes and get all their books so that they aren’t tardy to class,” the social studies instructor says.

Despite all of the hassle that construction has caused, Ms. Roybal and Austin remain optimistic about the future of the theater and what it might entail for the Christian Brothers community.

“I view the construction of the theater as a part of [CB’s] history and being able to watch the buildings go down and watch the new theater spring up is an experience I’ve found myself to be enjoying so far,” says Ms. Roybal.

“I’m a patron of the arts, I appreciate every form of art whether it be stage or cinematography which is why I’m really looking forward to this new theater,” says Austin

Whether you love or hate the construction of the new theater, it will last well into spring 2014. Until that time, the Christian Brothers community must face the difficulties caused by construction, realize the fruits of this labor and not allow ourselves to be overcome by these temporary struggles.