Brothers’ Varsity Women’s Soccer team shows promise after a first place finish in the Woodland tournament. While many CB students sat in joyful lethargy at home this weekend, players on CB’s Varsity Women’s soccer program played hard in their tournament at Woodland High School. All of the girls’ hard work and dedication in practice proved […] 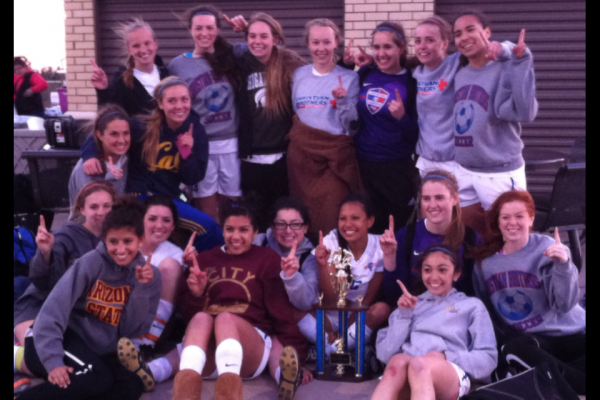 While many CB students sat in joyful lethargy at home this weekend, players on CB’s Varsity Women’s soccer program played hard in their tournament at Woodland High School.

All of the girls’ hard work and dedication in practice proved invaluable as they steadily charged on to win the championship game.

The girls started strong on Saturday with a 7-0 victory over Forest Lake Christian in the morning and a 3-2 afternoon victory over Vanden.  On Sunday, CB’s ladies tied Colfax 3-3, and defeated Casa Roble on penalty 2-2 (4-3) to win the championship.

Junior defender Hannah Hawkins (’14) believes that the group of CB girls really came together as a team over the weekend and formed a bond.

“We grew tight as a team and began to play together. That’s when we started scoring goals and winning games.” Hawkins told the Talon.

Coach Mr. Jake Hunley (’96) was exuberant at the success of his team early in the season.

“I was excited for the girls beginning of the year tournament. It’s nice to see what we have to work with and gives us an idea of what to expect for the rest of the season,” Hunley proclaims.

This tournament proved that the youth of Hunley’s team is an advantage. Many of the team’s young players show strong chemistry and ample skill already and only have room to improve.

The physical education and anatomy sees the youth of his team as one of its greatest assets because of the raw potential it provides.

“We have lots of room to grow, we have a lot of characters. With that inexperience and youth we do a good job of just never giving up, and that was true in this tournament” Hunley confidently states.

Naturally, the team’s early accolades have made the CB soccer maestro ambitious about the results of the 2013 season. He sees many of his players competing for spots and getting better in front of his eyes. This sort of progress, if continued, is a recipe for success in the long run.

But no goal is more prominent in Hunley’s mind than winning the last game of the season.

“Our goal is to win it all — to win the section championship.” Hunley asserts.

Only time will tell if this lethal combination of versatile youth and zealous leadership will be the right mixture for success for the Lady Falcons, but the future looks bright.

Be sure to come out and support the women’s soccer squad on their quest for a section title.