A CB student experiences what it is like to be homeless. (photo courtesy Jennifer Lystrup) I heard the people in the boxes around me begin to rustle, as they were being forced to awake and meet a new Tuesday morning. I slowly began to wake up. I was fighting it — I felt as if […]

A CB student experiences what it is like to be homeless. 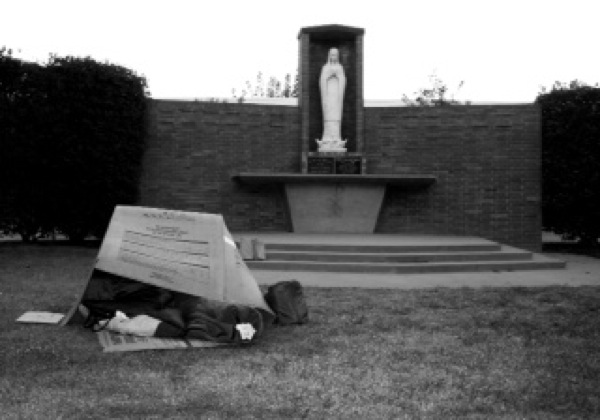 I heard the people in the boxes around me begin to rustle, as they were being forced to awake and meet a new Tuesday morning. I slowly began to wake up. I was fighting it — I felt as if I had gotten no more than an hour of sleep. I just wanted to roll over into my nice warm bed and snuggle into my down bed set.

I felt like death. My back hurt. My head hurt. My neck was stiff from sleeping on the cold hard ground. My entire body was sore. My clothes were damp. My jeans were dirty from when I woke up in the middle of the night to stretch my aching muscles.

It was definitely not a good night of sleep. I awoke cranky, tired, and flustered. As I rolled out of my dampened box, I could see my fellow classmates slowly emerging from the grogginess of an uncomfortable night of sleep. I could see the morning sleep in their eyes, their frizzy and matted hair. I noticed the appearances of the women more than the men’s.

I soon became self-conscious of my own appearance. I tried to avoid talking to people, in fear that they could smell my morning breath. I was uncomfortable.

However, my classmates and I shared a bond from the night we had just shared together. It was not them that made me feel a sense of unease, it was the underclassmen. It was the freshman and sophomores staring at our large group of students, the group of people that just woke up on the Mary Lawn at CB. They gave us looks of confusion.

I felt out of place.

Christian Brothers held a homeless immersion experience on November 5, 2012 called Displace Me. The Social Justice class of Ms. Jennifer Lystrup, participated in a 24 hour mock homeless experience. The idea of the excursion was to gain an understanding of the obstacles that homeless people encounter in their everyday lives. 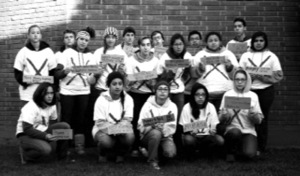 The Christian Brothers 2012 Displace Me immersion took place on a perfect night. It was not freezing outside, but a moderate temperature. It did not rain, nor was it windy. We were layered in clothes and had access to sleeping bags. Even though we did not have many materials, we still had more than the majority of the homeless population in Sacramento. This night was a night that homeless people prayed for.

Before the school sleepover, we participated in many rituals of homelessness. We gave ourselves street names that would further detach us from the rest of the Christian Brother’s community and when we were finally able to receive food it was from a soup line.

After our small dinner, two formerly displaced men, Sonny and Paul, came to speak to us about what it was like to be homeless.  We were given the chance to ask questions about their views on homelessness. Listening to the stories of Sonny and Paul was probably the most impactful moment of the immersion.

As we sat on the cold concrete against the lockers, a student asked Sonny if the idea of prison or a life of homelessness was more appealing. His response shocked me. He said that for some situations, prison was a better choice because you were provided with “three hots [meals] and a cot”, along with protection from the outside weather. 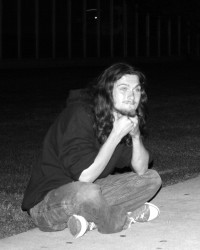 A member of the Sacramento homeless community shares his story with the Displace Me group. Photo courtesy of Jennifer Lystrup.

This was shocking because Sonny was willing to give up his freedom for the basic necessities all human beings have the right to.They were just grateful they were not going to get wet or catch a cold from the ever changing weather. Knowing this made me feel a little ashamed of my morning outcome.

Sacramento has one of the highest foreclosure rates in the US and these foreclosure rates have lead to a major increase in the homeless population of Sacramento. Many of these recently displaced people moved into tent cities by the American River on the outskirts of town. When the police force came and broke up the majority of the tent cities the Sacramento homeless community became further displaced.

They now have nowhere to go, and no place to call home. They sleep in city parks, in grass fields, under highway overpasses, and down by the river. They have no source of food and no or little income. This is when more fortunate people, like myself, begin to see the homeless community out asking for spare change. However, our first judgments of these dirty and grubby people are often invalid.

When we see the product of a difficult life in front of us, we often assume they are drug addicts or that it was their decision not to get an education and make a better life for themselves. We have not seen that person who has lost their job or the homeless teenager that has lost his family. We do not see the abused little girl or the battered wife. We do not recognize the injured military veterans scarred by war.

It is hard for wealthy “normal” people to acknowledge homeless people as human beings. It is easier to segregate them into the lowest social and economic class. This I experienced firsthand in the daily life of a high school student.

That very same morning we packed away our tattered boxes and dampened sleeping bags under the watchful eye of the underclassmen. We then received our meager breakfast of instant oatmeal — a meal we were happy to receive. After breakfast we were given descriptive signs that we were to use when asking students for spare change.

The cardboard signs varied with sayings from “single mother please help” to “will work for food”. All of the money earned from our mock homelessness experience would go towards providing the homeless community with basic necessities.

We scattered around the school campus asking teachers, friends, students, and parents if they could possibly spare any change. For the most part people were extremely generous — we received dollar bills ranging from ones to twenties and many coins in between. The feeling every time someone put money in our cup was amazing, I was filled with such a sense of accomplishment.

However, I could not help but notice the barrier between me and the other students. I would be like them on any other day, but today there was a wall between us. I could see how they felt about me. They thought I was weird. They did not understand what I was doing or why I was doing it.

[pullquote]I would be like them on any other day, but today there was a wall between us…To them I was not a person of significance.[/pullquote]

These students completely shut me out. They just completely ignored my existence. To them I was not a person of significance; I was just some weird student asking them for money.

This was the most frustrating feeling of the entire experience. I felt upset and I was extremely disappointed. That moment when a person totally shunned me was an eye opener. 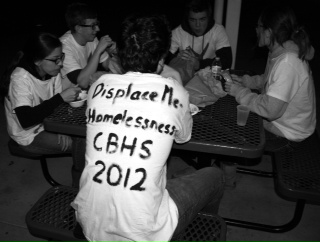 It took being ignored to make me realize all of the things I had done wrong — my perspective had changed. Homeless people were not a burden to me anymore — they were human beings that happened to be down on their luck. This did not mean that I gave money to every person that asked — I just gained a mutual sense of respect for the person in front of me.

Displace Me changed my view on the major social justice issue of homelessness that needs to be addressed. It made me think about homeless people and what they go through every day. I can never honestly say that I know what it is like to be homeless, but I can say that maybe I have a little more insight on the day to day struggles that homeless people endure.