Falcons Roll In First Round

The Christian Brothers Women’s Volleyball team is off to a successful playoff run. 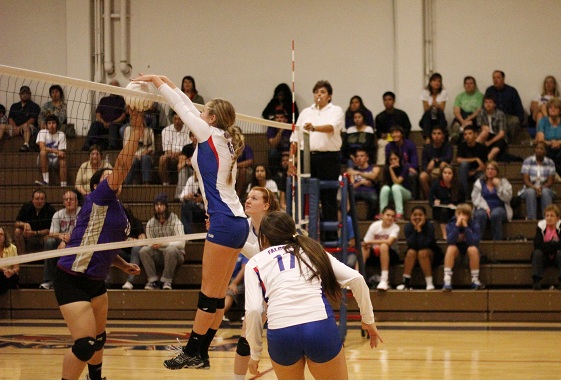 The Christian Brothers women’s volleyball team smashed Livingston 3-0 on Tuesday night at Ron Limeberger Gymnasium in the first round of the Sac-Joaquin Section Division III playoffs.

Our lady Falcons dictated the first playoff game against the Wolves from the start. With three quick matches, the girls eased their way into the second round of the postseason.

But the road to the playoffs for the team has not been easy. In order to be such a dominant force, the girls had to spend much of their summer practicing together. Once the season began, these Falcons showed that they were a force with which to be reckoned. Led by head coach Ms. Diane Heine, they rose to the top of the CVC and Sacramento Bee rankings.

“One of our goals as a team is to make it back to UC Davis,” Ms. Heine announced confidently, referring to the site of the section finals. “We decided to take it one game at a time”

The team stuck to the plan and was able to take second place in their league.

Co-captain Meggie Larson (‘13) is proud of her teammates for their hard work.

“We all really came together as a team at this point in the season,” she said. “We call the playoffs our kind of second season”

The girls advance to the second round against Vista Del Lago High School on Thursday November 8th at 7:00 pm.

Last year, Vista clinched the section title after a tough game against our own CB team. Now, with the Falcons season on the line, the girls travel to Vista’s home turf, ready to give it their all.

Bernie Swain (‘13), the team’s libero, is confident about the upcoming game.

“We’re a much stronger team than we were last year and we’re more prepared to play them,” she revealed.

“Were going to get revenge,” Meggie added eagerly.

With the end of the season approaching, Meggie is already becoming sentimental about her final playoff run as a CB volleyball player.

“At the end of the season, I’ll probably pour my heart out to the team,” she told the Talon.

The senior has had a great volleyball career at CB and appreciates everything her teammates and coaches do for her. She believes that next year’s team will be just as successful.

“Stay together as a unit because that’s the strongest way to play,” Meggie advises to future Falons.

As emotional as the seniors may be at this point in the season, Ms. Heine has something for them to remember.