The Talon’s Charlie Passarell went out to get a first person perspective on an intense game between two highly ranked water polo teams. To be completely honest, I was anything but excited about this game. Along with knowing little to nothing about sports, I was excessively worried that I would be alone in the stands […]

The Talon’s Charlie Passarell went out to get a first person perspective on an intense game between two highly ranked water polo teams.

To be completely honest, I was anything but excited about this game. Along with knowing little to nothing about sports, I was excessively worried that I would be alone in the stands with a horde of angry, yelling water polo parents.

Luckily, this wasn’t what happened.

As soon as I entered the facility I was met by the friendly shout of Anthony Colvard (‘13). I was much more relaxed and open to the game with a companion like Colvard to bounce thoughts off of.

Then, as suddenly as lightning strikes, the game began and the mood changed. The air became so thick you could cut it with a knife. I could feel everyone around me become tense.

The game moved exceptionally quickly. Before I knew it, the score was two to one with Christian Brothers in the lead.

[pullquote]The air became so thick you could cut it with a knife. I could feel everyone around me become tense.[/pullquote]

Mac Jarvis (‘12) put on one of the best goalie performances I’d ever seen in a sport — not that I’ve seen many. He was always diving, jumping, and flailing to get the ball. Amazingly focused, he would prevent a goal by any means necessary. Several times, he simply blocked the ball with his body, which looked like it hurt pretty badly. When he wasn’t blocking the ball, he would let out loud cheers to fuel the rest of the team. His yelling was only second to the Christian Brothers coach, however. 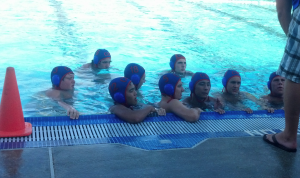 The Christian Brothers coach felt the need to constantly yell at our team. His burly build and loud voice made him terrifying in my mind. I made a mental note to never get on his bad side…or his good side. I’m just going to avoid contact with him altogether.

The Bella Vista coach was literally the polar opposite of the Christian Brothers coach. He sat calmly and only spoke in whispers, which I found equally terrifying. I could see, as he spit sunflower seed shells into an empty water bottle, that he was constantly plotting. He was clearly the type to observe and deduct. Scary.

At this point, the Christian Brothers coach put in number 16, Trevor Bergash (‘13). While most of the players had a specific person that they were more or less guarding or focused on, all of Trevor’s attention was on the ball. He glided through the water, more graceful than a fish. He would emerge out of nowhere and literally attack whoever had the ball. It was fantastic, to say the least.

Colvard quickly began referring to Trevor as “the water buffalo.” I decided this was quite fitting as I watched Trevor barrel yet another Bella Vista player who had gotten hold of the ball.

The teams then switched sides. Why? I have no idea — most likely to confuse all the people watching. This mix up ruined my understanding of what was happening for quite sometime, I even found myself clapping when the wrong team scored. I had lost it.

Throughout the game I had been eavesdropping on all the people around me. A gaggle of moms were having some particularly amusing conversations. They were becoming increasingly angry at the referees for making calls they disagreed with.

[pullquote]I even found myself clapping when the wrong team scored. I had lost it.[/pullquote]

I didn’t think much of this until I heard the Bella Vista coach tell his team to “get them kicked out.” Anthony and I questioned this extensively until one of the moms was kind enough to explain that it was “the nature of the game”. Apparently, the rules make it a crucial part of a team’s strategy to attempt to get other players kicked out. I was far beyond trying to understand the rules, though. I had simply given in and was content with watching these aquatic monsters battle it out.

Just as I was settling in and beginning to actually enjoy myself, both teams got out of the water and shook hands. The game was over. Apparently, we had won, 16-11. But I felt empty and unsatisfied by how quickly the game had passed.

As I was leaving, I noticed that the boys were handing the girls their ear protecting caps. When I asked about this, Colvard claimed they had to share.

I questioned Trevor about this further, though he wasn’t very bothered by it. You see, the water buffalo is a simple creature, not interested with the petty issues of man.

I was shocked by home much fun this game was. I will definitely consider coming to more Christian Brothers water polo games in the future, and will encourage other people to go whenever they have the chance.

As for our water polo teams, they are great, and should be saluted for their many achievements.